Europe and Middle East and Africa condom market size was valued at around USD 2 billion in 2018 and is expected to grow at a compound annual growth rate (CAGR) of 7.2% over the forecast period. An increase in government initiatives and awareness programs promoting the use of condoms is expected to aid the demand in Europe. Condoms are a vital element of the HIV/AIDS prevention strategy adopted in countries from the Middle East and Africa. Bulk procurement of the product by government and international healthcare bodies for free and subsidized distribution is anticipated to drive the market growth. 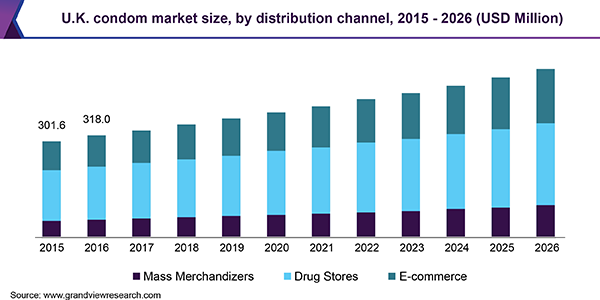 When used correctly, male condoms are 98% effective in preventing pregnancy and Sexually Transmitted Infections (STIs) including HIV. Hence, the use of male condoms during sexual intercourse is encouraged by most government and healthcare organizations on a global scale. International and government healthcare bodies such as the World Health Organization (WHO) and the Centers for Disease Control and Prevention (CDC) play a significant role in creating awareness regarding safe sex and the advantages of products.

Governments in various countries are undertaking initiatives to raise awareness and to promote the use of contraceptives in the younger generation to control the epidemic of HIV and other STIs and to help avoid unintended pregnancies. The Joint United Nations Programme on HIV/AIDS (UNAIDS) 2020 target, demands that 90% of all the people living with HIV know of their HIV status, 90% of all the people with HIV infection will receive sustained antiretroviral therapy, and 90% of all people receiving antiretroviral therapy will have viral suppression, participant countries are proactively promoting condom use along with providing adequate sex education to the youth.

The boom of online sales channels in developed as well as developing countries is expected to increase access and distribution of condoms. With growing internet penetration and smartphones, the e-commerce sector has witnessed prominent growth in various markets. Key players operating in the sexual wellness industry are also increasing their presence on online retail channels. Distributors, suppliers, and retailers are using their websites to reach a larger customer base.

Based on the distribution channel, the European condom market is categorized into mass merchandisers, drug stores, and e-commerce. Drug stores held the largest market share in 2018. Drug stores and retail pharmacies are the most preferred purchase point in European countries, which is expected to bode well for segment growth.

A favorable shift in the trend of buying condoms from drug stores due to reduced social stigma around buying condoms and an increase in awareness about the benefits of the product are the factors contributing to the segment growth. Moreover, increasing the visibility of condoms in drug stores is expected to further fuel growth.

On the basis of the distribution channel, the MEA market for condoms is trifurcated into the public sector, the social marketing sector, and the commercial sector. The social marketing sector is expected to witness the fastest growth over the forecast period, owing to increasing investments from the international healthcare organizations and condom manufacturers that are trying to increase their presence in the Middle East and Africa.

The availability of quality condoms in different variants at subsidized prices to meet customer needs is expected to increase the presence of the social marketing sector. Funding from NGOs, not-for-profit organizations, and social marketing condom manufacturers is improving product access in this region.

The public sector held the largest share in the Middle East and Africa condom market in 2018, owing to the strong presence of free condom brands, funded by the government and the United Nations Population Fund (UNFPA). These brands are made available through healthcare facilities and public health centers. The majority of the population prefers these brands as they are free of cost and easily accessible.

The rising prevalence of HIV/AIDS and STD, the growing presence of the LGBTQ community, increasing use of contraceptive measures to prevent unplanned pregnancies, and rising awareness among the young population about sexual health are some of the factors that have increased the adoption of condoms in Europe. In several countries, Condom Distribution Schemes are being implemented by the government and healthcare bodies. In the U.K., various distribution schemes target teenagers and young adults to encourage condom usage. However, there is a significant gap in the promotion and distribution of these contraceptives in high-risk countries in the countries from East Europe. 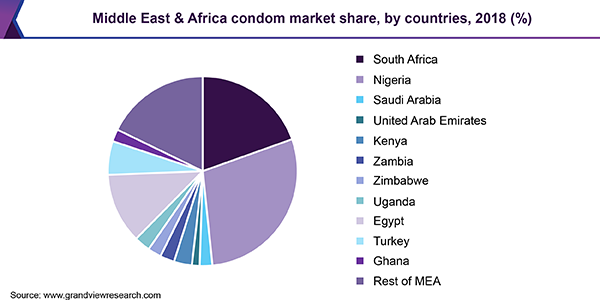 The MEA market for condoms is largely impacted by the lack of awareness regarding HIV transmission through unprotected sex, inadequate promotion of condoms, and limited distribution in the majority of the countries. Several countries in the region have social barriers that prohibit men and women from using any kind of contraceptive. However, the use of condoms is progressing with increasing government interventions and global HIV prevention and awareness programs.

The use of condoms in this region largely depends on the age group and the type of relationship between the partners. Nigeria held one of the largest market shares in 2018. High unmet need, with the annual requirement for nearly 360 million condoms, makes the country a potential market for investment.

Despite global brands dominating the market, local and regional manufacturers in Europe are trying to capture market share by introducing product variants that meet the demands of local customers. Brand loyalty among customers remains low due to the high competitiveness in the market. With the availability of a wide range of products by each brand, at low prices, brand shifting is very high among younger consumers.

This report forecasts revenue growth at regional and country levels and provides an analysis of the latest industry trends in each of the sub-segments from 2015 to 2026. For this study, Grand View Research has segmented Europe and Middle East and Africa condom market report based on distribution channel and region:

How big is the europe and mea condom market?

What is the europe and mea condom market growth?

Which segment accounted for the largest europe and mea condom market share?

Who are the key players in europe and mea condom market?

What are the factors driving the europe and mea condom market?

b. Key factors that are driving the market growth include an increase in government initiatives and awareness programs promoting the use of condoms is expected to aid the demand in Europe. Condoms are a vital element of the HIV/AIDS prevention strategy adopted in countries from the Middle East and Africa. 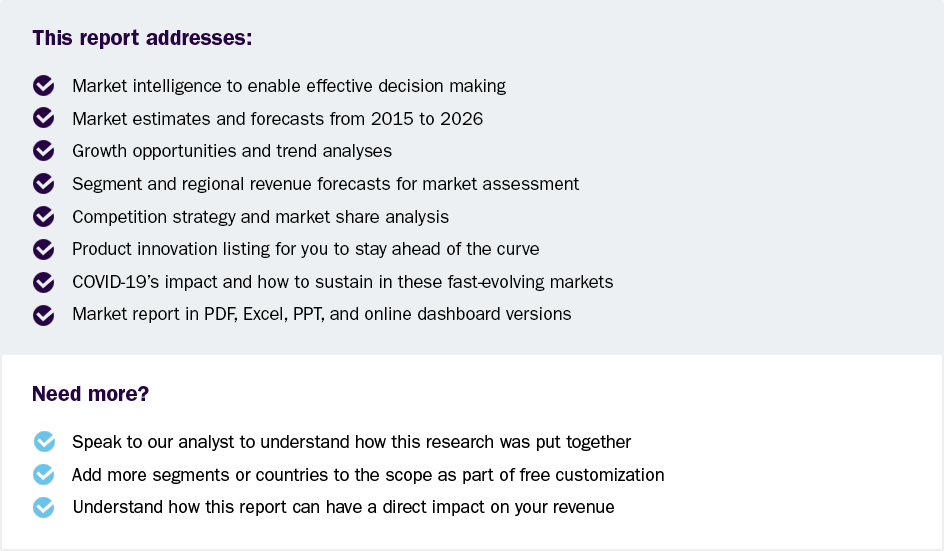