The Europe meat snacks market size was estimated at USD 1.94 billion in 2016. The rising demand for healthy snacks that have a familiar taste and are suitable for daily consumption is expected to drive the market growth.

Rising consumer awareness regarding nutritional ingredients along with rigorous branding efforts undertaken by major European manufacturers is expected to further propel meat snacks as a healthier alternative to the existing range of products. Increased emphasis on high levels of protein intake amongst millennials is expected to be a major driver of growing demand.

Product innovation with the addition of local flavors is expected to have a positive impact on the Germany meat snacks industry. Jack Link’s Europe acquired Unilever’s BiFi and peperami snacks, in 2014 which are among the highly consumed meat products in the country. This acquisition has resulted in an increased market share of Jack Link’s in the region.

Growing R&D on new flavors derived from natural ingredients is expected to drive demand for these products in the future. The demand is expected to be driven by the introduction of new flavors rather than the inclusion of new ingredients. Unstable raw materials prices, such as beef, pig, and poultry meat, pose a challenge to the product manufacturers, affecting their purchase decisions.

Rapid new product developments have resulted in a high number of offerings, which can lead to consumers being burdened with too many options. Increasing competition will lead manufacturers to ensure product positioning and breakthrough marketing strategies in order to sustain industry rivalry.

The distribution channels play an important role in the industry supply chain, wherein meat snacks are mass-produced items. The demand for the product is generally high due to which easy access becomes a major differentiating factor for the manufacturer.

The product segment has been categorized into jerky, meat sticks, pickled sausages, ham sausages, and pickled poultry meat. The pickled sausages segment dominated the Europe meat snacks market in 2016, accounting for a share of over 30%. The demand for jerky and sticks is expected to grow rapidly on account of the growing acceptance of these products in major countries of Europe including Germany, the U.K., and France.

Jerky is expected to be one of the fastest-growing product segments. The Jack Link’s jerky, which was originally popular in the American continent, is now gaining popularity in Europe as well. Countries such as the U.K. and Germany, which were originally dominated by sausages and pickled poultry meat, are now witnessing an increasing demand for jerky.

Moreover, the demand for meat sticks is expected to grow rapidly in the U.K., France, and other fringe parts of Europe on account of the rising awareness about healthy foods and changing the snacking habits o.f the population. Turkey and Russia are also expected to be the major markets for halal sticks, which would consequently augment the demand for this form of snack over the forecast period.

The discounts on large quantity purchases and ease of shopping offered by supermarkets are expected to drive demand. The rising number of supermarkets has resulted in improved access to these products for consumers. 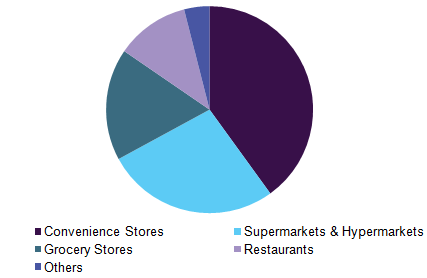 Convenience stores, being in closer proximity, helps manufacturers serve consumers in a more convenient way, which is further expected to drive the demand for these offerings over the forecast period.

E-commerce is gaining immense importance on account of the growing internet penetration among the population. Manufacturers have established their own e-commerce portals, which has resulted in increased sales through this distribution channel.

Grocery stores play an important role in the distribution of these products in Eastern Europe and other small countries. The perception among consumers that products available in grocery stores are fresh and of good quality is expected to drive the market demand.

The market has been dominated by countries such as Germany, the UK, France, Russia, and Spain. The demand in these countries is expected to grow on account of product awareness campaigns conducted and the introduction of new product forms. Belgium, Luxembourg, and the Netherlands are expected to be the major contributors to the overall demand over the forecast period.

Millennials are the major consumers of meat snacks in Germany. The growing number of millennials and rising awareness regarding healthy snacking are expected to boost demand over the forecast period. Manufacturers are now concentrating their efforts on the quality of meat and the introduction of new variants that can replace the traditional beef jerky.

The UK market is driven by rising new product developments. A significant feature of the industry is the entry of smaller specialist British companies that promote local recipes and traditional flavors. The population diversity in the country and the entry of healthy products are expected to boost the market demand.

The competitive edge in the industry is yet to be witnessed as the growth is still in its nascent stage. However, industry participants are adopting strategies that enable them to dominate and control the entire value chain. Companies such as Danish Crown and Cremonini Group are investing heavily in slaughterhouse facilities and distribution channels to gain a sustainable advantage.

This report forecasts revenue growth at country levels and provides an analysis of the industry trends in each of the sub-segments from 2014 to 2025. For the purpose of this study, Grand View Research has segmented the Europe meat snacks market on the basis of product, distribution channel, and country: