The Europe orthopedic navigation system market size was valued at USD 15.44 million in 2014 and is expected to grow at a CAGR of 5.0% over the forecast period. Rising incidences of osteoarthritis and demand for minimally invasive surgeries for joint replacement surgery are expected to boost the demand for surgical navigation systems over the forecast period. In addition, rising expenditure on healthcare, awareness pertaining to computer assisted surgical navigation system and adoption of these techniques are some factors contributing to market growth in the coming years. 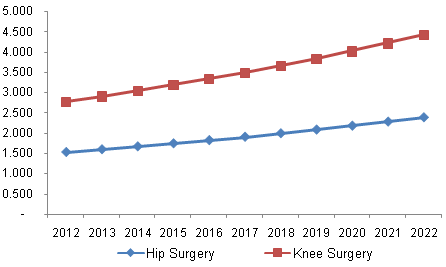 European Commission estimates around 20% of the population to be aged above 60 years in 2025. Women are more prone to degenerative joint disorders as compared to men post the age of 50. Total age dependency ratio in Europe is expected to rise from 51.8% in 2014 to 77.9% in 2080. Age dependency ratio in 28 EU countries is projected to increase from 28.1% in 2014 to around 51% in 2080. Around 1.7 million hip fractures have been registered in 1990, and this number is expected to rise to 6 million by 2050. Growing geriatric and obese population prone to hip fractures and degenerative joint disorders is expected to provide this market with lucrative growth opportunities in near future.

A study performed by the NCBI states that the estimated number of knee surgeries was valued at over 1.5 million. The fact that the number of procedures is on a constant rise will provide an attractive platform for the manufacturers to capitalize on. Additionally, favorable reimbursement policies and associated advantages related to knee navigation software are expected to boost market growth over the forecast period. Similarly, technological advancement in navigation systems such as information navigation system will improve demand over the forecast period.

On the other hand, hip surgery based navigation systems are expected to witness rapid growth in usage rates due to the increasing volume of hip replacement procedures and incidences of hip fracture, osteoarthritis, and rheumatoid arthritis. Some key problems addressed by surgical navigation systems for hip surgery include leg-length discrepancy, impingement, and instability. According to statistics published by the Centers for Disease Control and Prevention (CDC), the number of total hip replacement procedures performed in 2014 was 332,000 and is expected to grow further due to increasing geriatric population and awareness pertaining to computer-assisted hip surgeries.

Germany dominated the overall industry in 2014 at over 30.0% owing to rising adoption of automated orthopedic navigations system coupled with incidences of osteoarthritis due to growing geriatric population. Furthermore, high patient awareness levels, rising demand for minimally invasive surgeries, and presence of sophisticated healthcare infrastructure for joint replacement surgery are the other growth imparting drivers of this regional market.

The UK, on the other hand, is expected to register lucrative growth over the forecast period owing to high R&D investments aimed at joint reconstruction device development and rising level of awareness among target population and orthopedic surgeons.

In addition, technological advancement and strategic alliance is expected to provide this market with lucrative growth platform. For example, in March 2015, DePuy Synthes entered into an agreement with an advanced imaging solutions company Radlink Inc., thereby expanding its capabilities in the field of real-time imaging solutions for hip replacement procedures.