The global Fabry disease treatment market size was valued at USD 1.57 billion in 2017. It is anticipated to progress at a CAGR of 9.6% over the forecast period. Expanding base of patients suffering from Fabry disease coupled with increased adoption of novel therapies such as chaperone treatment has helped the market gain momentum. Besides this, extensive R&D activities and potential approval of promising pipeline products including substrate reduction therapies and enzyme replacement therapies are projected to escalate the growth of the over the forecast period.

Fabry disease is a rare X-linked lysosomal storage disorder with a deficiency of alpha-galactosidase enzyme resulting in progressive organ dysfunction. This disease is caused by an abnormal buildup of a specific fatty matter called globotriaosylceramide in multiple tissues of the body including eyes, skin, kidney, gastrointestinal system, brain, heart, and central nervous system. 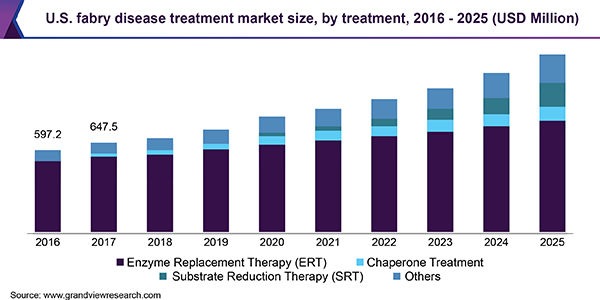 Patients suffering from Fabry disease commonly progress to a stage of severe pain of extremities, compromised kidney function often progressing to full kidney failure, early heart disorder, stroke, and disabling gastrointestinal symptoms. Because of the lack of a curative solution for Fabry disease, treatment options generally aim at the management of complications associated with disease progression and providing symptomatic relief.

Many patients remain undiagnosed due to the disease’s late-onset and moderate symptoms. Although accurate data on prevalence is not available, according to Sanofi, around 3,000 patients suffer from Fabry disease in the U.S., and a similar number of patients are affected in other countries. Fabry patients on average live longer in comparison to patients with other lysosomal storage disorders.

On the basis of treatment type, the global Fabry disease treatment market has been categorized into enzyme replacement therapy (ERT), chaperone treatment, substrate reduction therapy (SRT), and others. The Standard of care for disease management is enzyme replacement therapy. Although, both the ERTs, Sanofi’s Fabrazyme and Shire’s Replagal, have been approved in Europe, only Fabrazyme has been approved in the U.S. The focus of current clinical trials is to improve safety and efficacy profile of ERTs and introduction of novel oral therapies that can eliminate the need for intravenous infusions. Recently Amicus Therapeutics’ Galafold has been approved as the first oral chaperone therapy for the treatment of adult patients in the U.S., Canada, EU, Japan, Australia, Israel, and South Korea. 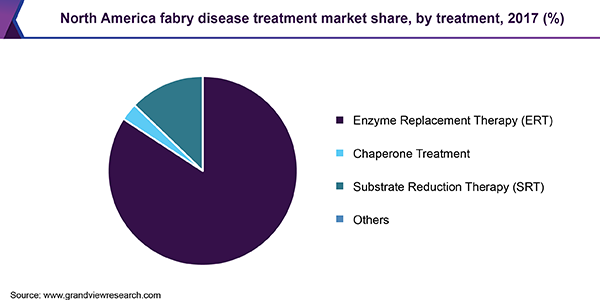 The enzyme replacement therapy segment held the largest market share in 2017. It is poised to retain its position through 2025. Strong sales of Fabrazyme and Replagal and potential approval of promising pipeline candidates are supporting the dominance of the segment. However, the launch of new efficacious therapeutic options such as gene therapies is much needed for a noteworthy increase in patient benefits.

North America was the most prominent regional market in 2017, followed by Europe. Higher adoption of novel therapies, better healthcare facilities, and favorable reimbursement policies are playing a vital role in the growth of the market in the region.

Coverage of expensive medications such as Fabrazyme by health insurance programs and favorable governmental healthcare policies are also prompting drug companies to increase R&D investments in the field of rare diseases.

Asia Pacific presents immense growth opportunities for pharmaceutical companies due to increasing healthcare expenditure and improving infrastructure. The region is likely to experience the fastest growth during the forecast period, followed by Latin America, primarily due to large populations in emerging countries.

Sanofi is at the forefront of the global arena due to strong sales of their marketed drug Fabrazyme for the treatment of Fabry disease. Sanofi is closely followed by Shire, whose product, Replagal, has not been approved by the FDA. However, Sanofi and Shire are expected to face stiff competition from biosimilar launches during the forecast period. Furthermore, Amicus Therapeutics is emerging as a global player in rare disease space with the launch of Galafold, the first oral treatment for Fabry disease. Idorsia and Avrobio are also estimated to command a significant share due to the growing popularity of substrate reduction therapies and gene therapies in the market with potential launches of their pipeline products lucerastat and AVR-RD-01, respectively.

This report forecasts revenue growth at global, regional, and country levels and provides an analysis of industry trends in each of the sub segments from 2016 to 2025. For the purpose of this study, Grand View Research has segmented the global Fabry disease treatment market report on the basis of treatment and region: