The global fiberglass pipe market size was estimated at USD 3.83 billion in 2016. Increasing need for lightweight, fire retardant, high corrosion resistance and high stiffness pipes is expected to be a key factor driving the global market growth over the forecast period.

Fiberglass pipes are composite materials which have combine properties of two or more materials such as glass fibers and resins, that are used in various end-use industries such as chemicals and irrigation. The key end-use industries include oil & gas, irrigation, chemicals, sewage and others. The industry is mainly driven by the GRE product segment owing to its application in various offshore and onshore oil & gas production and exploration activities.

The U.S. was estimated at USD 562.9 million in 2016 and is anticipated to grow at a CAGR of 4.3% from 2017 to 2025. U.S. senate introduced Water Resources Development act of 2016, to invest in water infrastructure improvements and to reduce corrosion resistance failures with existing installations. This provides ample opportunities for the manufacturers to supply cities with high corrosion-resistance pipes.

The global demand is driven by increasing need for products that offer advantages such as easy installations, low maintenance costs, flexibility in producing complex shapes, and immunity to corrosion. Traditional products such as poly vinyl chloride (PVC), concrete, and steel fail to meet the changing consumer requirements, which is booming the growth.

The market is gaining widespread acceptance as a viable alternative to conventional ones owing to factors such as long-life span due to greater corrosion resistance and easy handling due to lower weight. Increasing acceptance of its usage various applications as a result of stringent regulations is also bolstering the growth. Fiberglass pipes also offer advantages such flexibility in manufacturing the product in varied range of diameters and shapes to suit the customer needs in wide variety of applications. Excellent hydraulic features are maintained during the operation due to less internal friction inside the product’s surface.

In terms of revenue, GRE segment accounted as the largest segment and is expected to reach USD 3.14 billion by 2025 growing at a CAGR growth of 5.3% over the forecast period. It accounted for 51.9% of the global revenue share in 2016.

Fiberglass pipes reinforced with epoxy resins are suitable in applications that operate under extreme pressure and thermal conditions that require high corrosion resistance such as industrial and offshore oil & gas applications. In addition, with the approval of International Marine Organization (IMO) for the use of these products in level 3 fire endurance marine applications, the demand is projected to increase significantly from 2017 - 2025.

E-glass fiber was estimated as the largest segment in 2016, accounting for 57.0% of the global revenue share. E-glass fiber is used as reinforcement in many composites. The product enhances the resin’s performance as a strengthening agent. The market for E-glass fiber is partially consolidated with the presence of players such as PPG Industries, Saint-Gobain Vertotex, and Nippon Electric Glass Co., Ltd. E-glass fiber is used in applications such as drainage in construction and marine cooling.

Oil & gas industry emerged as the leading end-use segment and accounted for 41.9% of the global revenue share in 2016. It was followed by chemicals and irrigation as the second and third largest market respectively,in terms of revenue. The market is highly influenced by the oil & gas end-use industries in the emerging countries in Asia Pacific, South & Central America and Middle East & Africa. This is attributed to the energy & infrastructure reforms initiated to upgrade their ageing infrastructure and meet their energy needs owing to rapid growth development in these regions.

In addition, chemical Industries is one of the established and rapidly growing markets in Europe and North America. Fiberglass pipe growth in North America and Europe is augmented by the falling prices of natural gas, which is used as feedstock in many chemical processing industries. Construction is a diverse industry that is expected to experience robust growth due to growing infrastructural development in the region, especially in China, India and Saudi Arabia.

Asia Pacific leads the fiberglass pipe market in terms of revenue in 2016, and this trend is expected to continue over the forecast period. It was estimated at USD 1.58 billion in 2016 and is projected to grow at a CAGR of 6.8% from 2017 to 2025.

In emerging economies such as China, India and Japan where energy demand is rapidly growing, preference for natural gas as a replacement for coal is a growing trend. Importing natural gas has a high price attached to it, but transportation through pipeline is preferred as an economical option when compared to transportation of gas through large LNG vessels. This necessitates huge amount of investments to develop supporting infrastructure. Owing to these factors, the market is expected to witness significant growth as a potential replacement for conventional steel and concrete pipes. 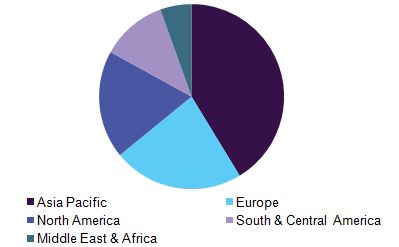 Asia Pacific was followed by Europe in terms of revenue and is expected to grow at a CAGR of 3.6% over the forecast period. Economic recovery in European countries and increasing dependence on Russia for natural gas imports in this region is projected to fuel the demand in end-use applications. With increasing urbanization and drought conditions, European region is witnessing an increase in desalination facilities across several countries. GRP and GRE piping equipment in desalination plants and manufacturing of chemicals and effluent treatment facilities is expected to fuel the demand over the forecast period.

This report forecasts revenue growth at global, regional & country levels and provides an analysis on the industry trends in each of the sub-segments from 2014 to 2025. For the purpose of this study, Grand View Research has segmented the global fiberglass pipes market on the basis of product, fiber, end-use and region: