The global fitness app market size was valued at USD 2.4 billion in 2018 and is expected to grow at a CAGR of 21.1% during the forecast period. The growth of this market can be attributed to factors such as the presence of large pharma organizations, along with key players from multiple industries, and increasing demand for continuous health assessment. 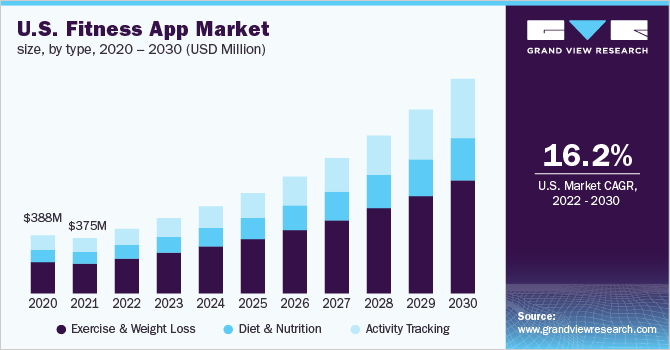 For instance, in August 2015, Adidas, a manufacturer & designer of shoes & apparel, acquired Runtastic for USD 239 million. Runtastic is an Austrian developer and provider of activity tracker apps, hardware products, and services, such as online training logs and detailed data analysis, among others.

The growing penetration of smartphones and tablets across all demographics has resulted in high adoption of fitness apps. Some apps offer customized services based on body physiology and requirement. However, users may find it difficult to sustain workout or diet routines, in the long run, resulting in loss of a large consumer base.

According to a study published in the Health Communication journal, features of certain apps boost intrinsic drive of autonomy, thus increasing the chances of maintaining a daily workout or diet routine. In July 2017, Lose It!, by FitNow, Inc., launched embodyDNA, a DNA-based weight loss plan provider that offers personalized results through an in-app interactive experience.

Another health app-embodyDNA-provides customized recommendations on food consumption and physical activity, which aid in weight loss. Lose It! developed the app in partnership with Helix, a manufacturer of human genomics-based health products. The abovementioned factors exhibit the high growth opportunities available in the market.

The growing demand for portable health tracking systems led to the expansion of wearable technology. In March 2019, Fitbit launched four wearables with costs ranging from around USD 70 to USD 160, to provide affordable activity tracking. Fitbit redesigned the app to enable users to connect on its social community to help evaluate other users' stats & progress.

Based on the platform, the market has been segmented into Android, iOS, and others. The market for Android is expected to grow at the highest rate during the forecast period owing to the increased adoption of this platform, especially, in countries such as Egypt, India, Brazil, Ireland, Portugal, Turkey, and South Africa.

Based on the device, the market has been segmented into smartphones, tablets, and wearable devices. Smartphones hold the largest share due to their high adoption and app compatibility. Moreover, globally, smartphones are considered to be a necessity as opposed to tablets, which are usually used at home or corporate settings. 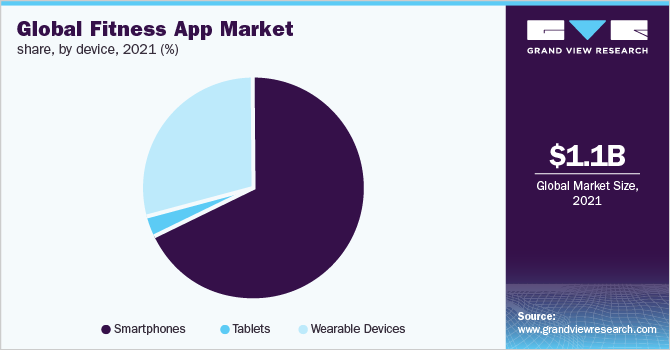 The market for wearable devices is expected to grow at the highest rate during the forecast period. The use of wearables has expanded to all age groups. In 2015, 24% of the population aged 25 to 34 years, while 6.5% of the population was 55 to 64. In 2019, the proportion of 25 to 34 years of age cohort increased to 38.0%, while market penetration increased substantially to 13.2%.

Among all regions, North America held the largest share of the fitness app market. Growing awareness about fitness & daily health monitoring has led to an increase in the adoption of fitness apps and a significant rise in the number of new players in the region. Moreover, the market is witnessing a rising number of partnerships between key players, thereby resulting in the introduction of superior quality apps. In April 2019, Google partnered with Apple Inc. and launched the Google Fit app for the iOS platform. This platform offers fitness activity goals based on recommendations from the WHO and the American Heart Association. The Asia Pacific is likely to grow at the highest rate over the forecast period. Various countries in this region are adopting digital health strategies to deliver improved healthcare with better outcomes.

Some of the key players are Adidas; Appster; Fitbit, Inc.; FitnessKeeper; Azumio, Inc.; MyFitnessPal Inc.; Nike; Noom; Under Armour, Inc.; Applico; Aaptiv; and Appinventiv. A growing number of new players are entering the market owing to the increase in stakeholder interest in this field. In December 2017, HealthifyMe raised USD 1 million from a Dubai-based investor, followed by a Series A funding of USD 6 million from Inventus Capital, IDG Ventures India, and Blume Ventures.

In December 2018, Freeletics, a Germany-based digital fitness startup, received a Series A funding of USD 45 million. According to Freeletics, 31 million users in nearly 160 countries use fitness and personal coaching apps.

This report forecasts revenue growth at global, regional, and country levels and provides an analysis of the latest industry trends in each of the sub-segments from 2015 to 2026. For this study, Grand View Research has segmented the global fitness app market report based on type, platform, device, and region:

How big is the fitness app market?

What is the fitness app market growth?

Which segment accounted for the largest fitness app market share?

b. Exercise & weight loss dominated the fitness app market with a share of 54.6% in 2019. This is attributable to the increasing number of people seeking a health-conscious lifestyle.

Who are the key players in fitness app market?

What are the factors driving the fitness app market?

b. Key factors that are driving the market growth include the presence of large pharma organizations, along with key players from multiple industries, and increasing demand for continuous health assessment.