The global flexible, printed and thin film battery market size was valued at USD 6.5 billion in 2018 and is anticipated progress at a CAGR of 39.7% over the forecast period. Inherent properties of flexible, printed and thin film solid-state batteries that include high energy density, lighter weight, longer lifespan, improved safety performance and their application in wearable devices, medical equipment, and smart cards are expected to drive their demand in the market.

Electronic equipment manufacturers are among the chief consumers of flexible, printed, and thin film batteries owing to their requirement in ultra-low power electronics such as MCUs, RTCs, and DSPs sensors for data capture and analysis and smart devices managing wireless networks such as Wi-Fi, Bluetooth, etc. 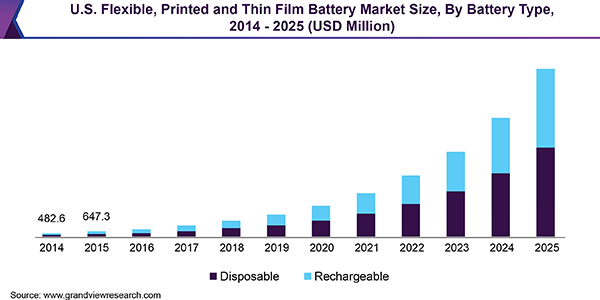 Wearable devices such as smartwatches, smart clothing, and fitness bands are incorporating thin film, flexible batteries due to their compact design and enhanced recharging rate. This trend is expected to provide potential growth landscape for printed, flexible, and thin film battery market over the forecast period.

The industry in the U.S. is estimated to witness significant growth rate on account of the rising adoption of smart cards such as EMV chip card technology. Smart cards are manufactured at a high temperature of about 130ºC to 150ºC, which do not allow conventional batteries to function as they degrade the organic content present inside the battery. Moreover, batteries with non-liquid electrolytes sustain the high-pressure lamination processes, thereby fueling the product demand.

Advancements in fabrication technologies such as vacuum evaporation using high-density plasma are expected to fuel the demand for the product in the market. Flexible, printed and thin film solid-state batteries are manufactured by depositing battery components with thickness less than 5μm on a substrate. Growing focus on R&D activities is likely to result in improved deposition techniques and high-volume manufacturing. Strategic partnerships among manufacturers are likely to accelerate the adoption of new technologies in flexible, printed and thin film battery market.

Raw materials used in the production of these printed batteries are much costlier in comparison to conventional lithium-ion batteries. However, mass production techniques may lower the per-unit cost of flexible, printed and thin film battery. For instance, Excellatron, a company based in the U.S., has deployed numerous in-line deposition systems along with large-scale web coating system to produce 100,000 cells per month, thereby boosting production volume.

Technological advancements such as vertical construction of disposable batteries are gaining pace in the printed, flexible, and thin film battery market. For instance, Molex LLC, a company based in the U.S., manufactures 1.5V and 3V thin film batteries through vertical construction, which account for lesser carbon footprint and offer enhanced internal resistance along with improved performance.

Wearables application segment for these printed batteries accounted for 30.7% of the market share in 2018. The growth of the segment can be attributed to the growing demand for wearable electronics and small energy storage sources. Moreover, compact size and light weight of wearable batteries are likely to maximize their penetration rate. 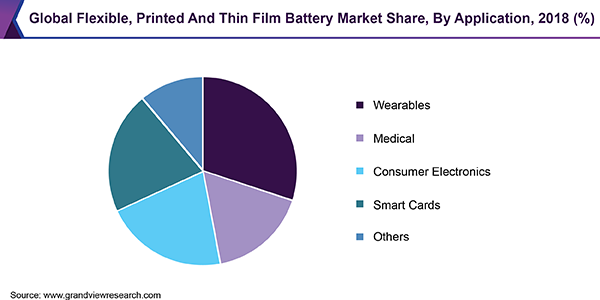 Battery manufacturers are focusing on low-cost manufacturing processes such as using high-density plasma for material deposition to meet the rising demand for rechargeable flexible and thin film batteries for their use in electronic segment. Moreover, stack of thin film cells is assembled to function as an advanced battery for several hand-held devices such as smartphones. These practices are expected to improve the product marketability over the coming years.

The market in North America was valued at USD 2.1 billion in 2018, with the U.S. being the major contributor to the market revenue generation. Rising adoption of EMV chip card technology, embedded energy, power back-up, and rechargeable power is expected to enhance the penetration of the product across the country.

Germany is anticipated to witness substantial growth over the forecast period. Growing investments in high-quality medical equipment including diagnostic imaging, optical technologies, and dental products are expected to majorly drive the regional growth. Government regulations favoring the use of solar panels for electricity generation are likely to further prompt market growth.

Flexible, printed and thin film batteries market in the U.K. is the second-largest contributor after Germany and accounted for over 22.8% of the regional revenue share in 2018. Growing adoption of smart cards and automation in disposable medical devices are likely to fuel the business growth. Furthermore, rising demand for mobile electronic devices and advancements of security systems are likely to complement the industry growth.

Asia Pacific is expected to emerge as the fastest-growing regional market over the forecast period, registering a remarkable CAGR of 43.6%. Growing electronic manufacturing industry due to large consumer base and expanding applications in emerging countries such as China, Japan, India, and South Korea are likely to bolster industry growth across the region.

In May 2018, Cymbet launched power management Real-Time Clock to enhance the attributes of solid-state rechargeable micro battery EnerChip catering to the low power applications segment. Competitive pricing is further likely to assist in bolstering the market growth of these printed batteries over the forecast period.

This report forecasts revenue and revenue growth at global, regional, and country levels and provides an analysis on the industry trends in each of the sub-segments from 2014 to 2025. For this study, Grand View Research has segmented the global flexible, printed and thin film battery market report on the basis of battery type, application, and region: