A smartwatch is a wrist-worn wearable device and provides functionalities far beyond those of a traditional wristwatch. They are usually used as a companion device and need to be paired with a smartphone through Bluetooth and near-field communication (NFC) among other technologies. The global market was estimated to be valued at USD 702.5 million in 2013, with shipments in the same year amounting to a little over 2 million units. A well-designed smartwatch can be used as an extension to a smartphone or related device; additionally, since the focus is on apps, the high degree of connectivity provided proves useful to end-users. Smartwatches are particularly useful for health-conscious users aiming for fitness tracking and health-related purposes. Global smartphone shipments are expected to continue increasing over the next six years, giving impetus to the smartwatches market. While there are numerous features announced in smartwatch releases, fitness remains the focal point of development. For example, in 2014, Google announced its new smartwatch, which is targeted at delivering real-time speed, time, and distance information when the user is on a walk or run. Android has been dominating the industry in terms of operating system used, primarily due to sales of Samsung’s smartwatches. Google also announced Android Wear, an operating system designed for wearable devices, and is working with companies including Motorola, LG, Samsung, HTC, and Asus among others. Other operating systems include Pebble OS, which is a FreeRTOS used by U.S. based Pebble.

High-end smartwatches accounted for approximately 90% of the overall market share in 2013. While growing demand for wearable technology and the entry of a considerable number of established players are expected to drive the market, unwillingness to pay between USD 250 and USD 300 for a smartwatch due to the lack of a compelling value proposition is a concern. Limited battery life is expected to be a restraint for market growth, with a tradeoff between battery life and overall performance. Privacy concerns among users may also inhibit acceptance; this is mainly because user-related data and statistics are available on the cloud, and maybe misused. The average selling price of smartwatches is expected to steadily decline, mainly due to the expected number of market entrants. While the market is presently overrun with companies offering high-end products at premium prices, growing R&D and commercialization activities are expected to result in a significant number of mid-priced and low-end products over the forecast period.

North America and Europe accounted for approximately 60% of the overall market share in 2013. Higher purchasing power and awareness among users is expected to drive the regional industry over the next six years. Health and fitness are expected to remain the key smartwatch applications through the forecast period, which can be attributed to the increasing percentage of health-conscious consumers that need real-time tracking and feedback on their daily activities. 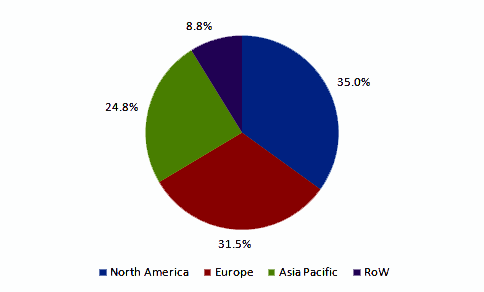 The market in the Asia Pacific is expected to grow at the fastest rate, mainly on account of high smartphone penetration in the region. China-based companies such as Huawei, ZTE, and HTC have been focusing on smartwatch development. The regional market is also expected to be driven by growing product proliferation in Japan, Singapore, and India.

Companies such as Samsung Electronics and Apple Inc. are expected to benefit from growing adoption. Since smartwatches are paired with related smartphones, the large installed base of smartphones offered by these companies is estimated to contribute to revenue. In addition to manufacturers, component providers are also expected to benefit from the smartwatch wave, including technology and display providers. A growing number of startups has spurred development activity, a trend that is expected to resonate over the forecast period. Companies operating in the market focus primarily on innovation for achieving differentiation and competitive advantage. The industry is characterized by R&D activities and the presence of a large number of players, which is further expected to exponentially increase over the forecast period. South Korea based Samsung Electronics with its flagship Galaxy Gear product contributed to the majority of global smartwatch shipments in 2013. Companies operating in the market focus primarily on innovation for achieving product differentiation and competitive advantage. Industry participants include Samsung Electronics, Google Inc., Sony Corporation, and Qualcomm Inc. among others.