The global thin film battery market size to be valued at USD 5.2 billion by 2027 and is expected to grow at a compound annual growth rate (CAGR) of 35.52% during the forecast period. Increasing demand for the Internet of Things (IoT) devices, wearable electronics, and medical tracking applications in both developing and developed countries are expected to boost the market growth over the estimated period. Furthermore, ongoing research and development activities in the global battery manufacturing industry on account of varying needs from numerous end-user sectors have driven the development of products, which outpace conventional batteries, in terms of durability and performance. The U.S. accounts for a dominant market share in the global market globally. The availability of R&D funds provided by the U.S. Department of Energy for better technological development has been driving the market in the country. Furthermore, a rise in demand for wearable devices is expected to boost regional growth in the forecast period. 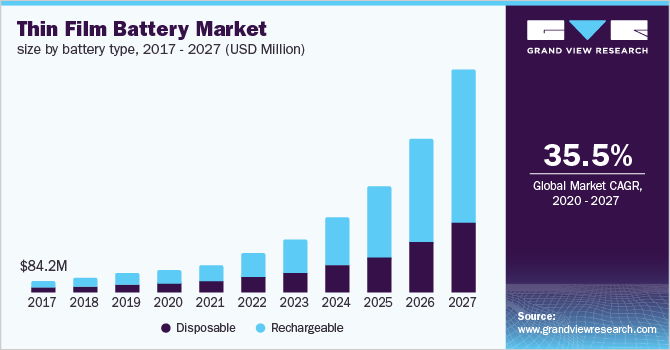 The technical improvement in thin-film batteries concerning charge density and life span of a battery though making it safe for usage has observed an increase in recent periods. With the growing demand for smartwatches, leading players in the industry are motivated towards dropping the technological blockades hence, letting the batteries be thin and more flexible. Several government standards and regulations limit the usage of conventional batteries as they are made of using harmful chemicals, such as mercury and cadmium. Moreover, rising awareness about the hazards of lithium-ion batteries will boost the demand for thin-film batteries.

However, the raw materials required to manufacture thin-film batteries are much costlier than lithium-ion batteries. Moreover, volatile prices of these materials and their chemical nature lead to high material handling costs that are finally charged on the final product. Therefore, such factors are likely to pose a challenge to market growth.

The demand for thin film batteries is growing at a fast pace owing to the widespread usage of smartphones, iPad, and other electronic devices. Thin film battery applications are becoming increasingly accepted as there is growth of smart electronics such as smartwatches and fitness bands. This is one of the primary factor anticipated to drive the market growth during the forecast period.

The proprietary technology that is used to make thin film flexible batteries vary from one manufacturer to another, as it relies on the producer's criteria. As some batteries are designed for specific electrical devices, they may cause compatibility issues when used with other devices. Owing to this, the lack of standards followed during battery development acts as a major hurdle for the expansion of the thin film battery market.

Thin film batteries suffer a multitude of challenges including a shorter operational life when compared to traditional batteries to power high end gadgets. Furthermore, balancing the current rate, battery capacity, and battery volume is difficult for thin film batteries. Hence, factors like these are expected to restrain the market growth.

The rechargeable type segment accounted for the dominant market share of over 57% in 2019. It is projected to expand further at the fastest CAGR from 2020 to 2027. Rechargeable batteries are suitable for use in consumer electronics devices. They are also used in medical devices, wireless sensors, wearable electronics, and Internet of Things devices. Ongoing R&D activities by various research institutions and companies with a focus on cutting the overall costs of these batteries is projected to boost the segment growth over the upcoming years.

The wearable devices emerged as the leading application segment accounting for a share of over 33% in 2019. Wearable devices, such as fitness bands and smartwatches, are integrating thin-film batteries due to their enhanced recharging rate and compact design. Smart card application segment is likely to witness significant growth owing to extensive product demand in banking cards and identification cards.

The rise in demand for smart cards for authentication purposes from various sectors is also expected to boost the segment growth in the forecast period. The medical segment is expected to witness considerable growth during the forecast period owing to extensive product usage in medical applications, such as drug patches, Transcutaneous Electrical Nerve Stimulation (TENS) devices, biosensors, diagnostic devices, and patient monitoring devices. Other product applications include Radio Frequency Identification (RFID) and portable devices.

Below 1.5 V type emerged as the leading segment in 2019 and accounted for over 45% of the global share. The segment will expand further at a steady CAGR from 2020 to 2027 due to high demand for below 1.5 V thin-film batteries from numerous applications, particularly from lower-power applications, such as wireless micro-sensors, smart cards, toys, medical patches, and RFID tags. 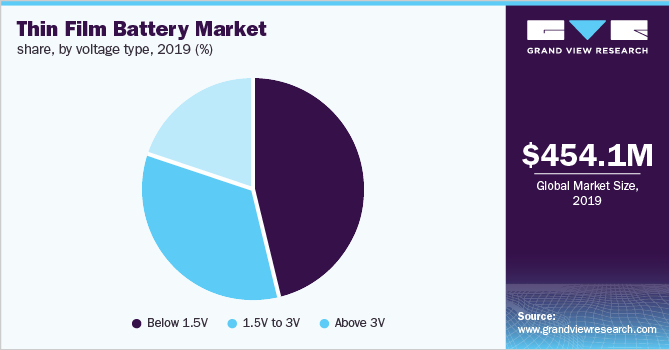 The above 3 V segment is likely to witness the fastest CAGR over the forecast period. Various applications where above 3 V batteries can be used are smartwatches and consumer electronics devices. The 1.5 to 3 V segment had a significant market share in 2019 and will witness steady growth in the future owing to the use of these batteries in consumer electronics and medical devices, sensors, and smart labels and tags.

North America dominated the global market in 2019 accounting for a share of over 40% and is expected to retain the leading position throughout the forecast years. Led by the U.S., growing R&D activities and technological innovations are projected to be the key driving factor for the regional market.

Europe accounted for a significant share in the global market in 2019. Growth in the region is a result of ongoing technological developments as well as stringent government safety regulations for battery applications. Germany accounted for a dominant share in the region in 2019 owing to the high demand for wearable and medical devices in the country. 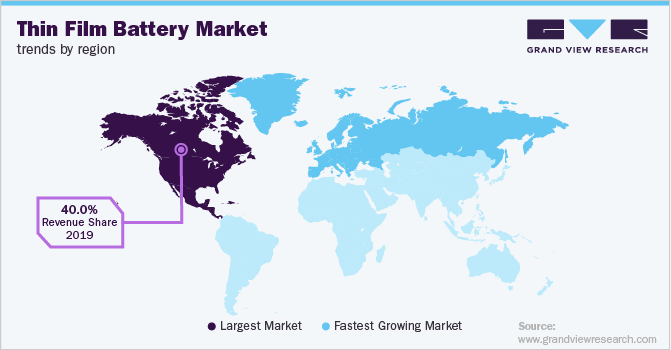 APAC is projected to register the fastest CAGR from 2020 to 2027. This growth is credited to rising product demand, increased adoption of IoT devices, and rapidly expanding electronics device manufacturing industry in the region. Emerging countries, such as China, South Korea, Japan, and India, lead the regional market. The rise in the number of production facilities in these countries and growing application scope are further expected to fuel the market growth over the forecast period.

The global industry is moderately consolidated. The vendors continue to focus on technological advancements and innovations in battery technology. Such inventions coupled with competitive pricing are likely to support increasing market share over the forecast period.

Companies are investing heavily in research and development to overcome technological barriers and enhance service quality. Furthermore, companies are also focusing on merger & acquisition and collaboration activities to enhance their technological & financial capability and to increase their market share.

Some of the prominent players in the thin film battery market include:

This report forecasts revenue growth at global, regional, and country levels and provides an analysis of the latest industry trends in each of the sub-segments from 2020 to 2027. For this study, Grand View Research has segmented the global thin film battery market report based on battery type, voltage, application, and region: 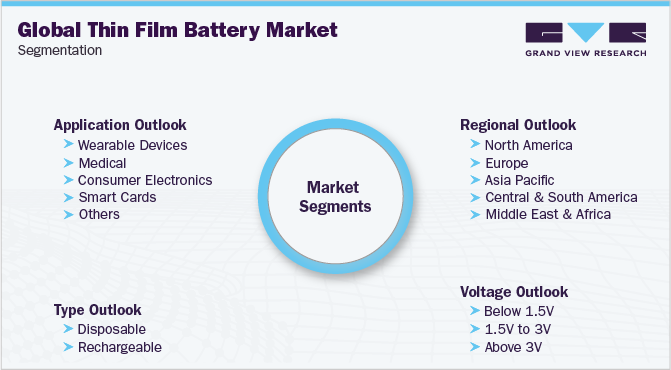 How big is the thin film battery market?

What is the thin film battery market growth?

b. Rechargeable was the largest segment accounting for 57.98% of the total revenue in 2019 owing to a rise in demand for rechargeable batteries in wearable devices.

Who are the key players in thin film battery market?

What are the factors driving the thin film battery market?

b. Key factors driving the growth of thin film battery market include a rise in demand for smart cards and wearable devices coupled with ongoing technological advancements.