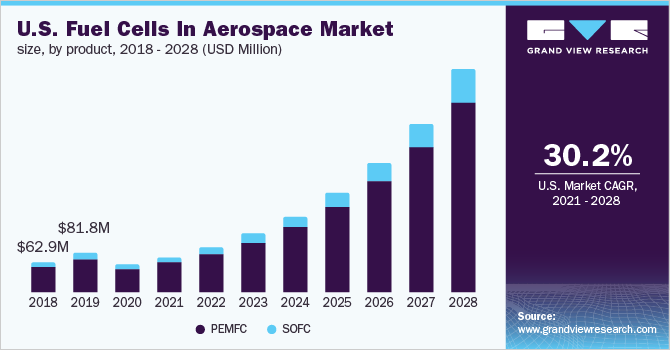 The government of Canada introduced the Canadian Fuel Cell Commercialization Roadmap in 2003. The objective of this roadmap was to accelerate the commercialization of fuel cells and hydrogen technologies in Canada. This roadmap was updated in 2008 and was outlined as a significant tool for Canada to achieve a low carbon transition in the future.

The U.S. Army and U.S. Navy are among the users of fuel cells in North America. Vendors operating in the market are continuously developing components of fuel cells that are used in rotorcrafts.

The PEMFC product segment accounted for the largest revenue share of over 85.0% in 2020. In the aerospace sector, PEMFC is widely used for transportation applications due to its efficiency, compactness, temperature range, and lifetime.

As per Honeywell Aerospace, air-cooled PEMFC is best suited for aerospace applications due to advantages such as better thermal management, the lighter balance of plant, shorter stack service life, and limited integration flexibility.

In the aviation industry, SOFC is more efficient than PEMFC in terms of output power. Boeing has initiated a feasibility study to investigate the SOFC auxiliary power unit (APU) on B737. With this technology, APU is 45% efficient in turning fuel into electricity in contrast to a gas turbine, which is only 15% efficient.

The Department of Defense (DoD), Department of Energy (DOE), and NASA are interested in developing the SOFC technology as it enables efficient power systems for defense applications. The purpose is to develop lightweight logistic fuel compatible systems, power generation for battery charging, range extenders for electric vehicles, and power for unmanned aerial and underwater vehicles.

The commercial aircraft's segment is leading the segment with a share of over 75.0% in 2020. Currently, smaller-sized aircraft with a seating capacity of 20 passengers are equipped with hydrogen-powered fuel cells. However, aircraft manufacturers are conducting feasibility studies for larger commercial aircraft. For instance, in January 2021, Airbus organized the ZEROe program, which consists of six, eight-bladed hydrogen-fuel-cell-powered pods mounted beneath the wing of the large commercial aircraft.

Vendors operating in the market are continuously developing components for fuel cells that are used in rotorcrafts. For instance, in August 2021, HyPoint specializing in air-cooled fuel cells for electric aircraft collaborated with Piasecki Aircraft Corporation (PiAC) to develop fuel cell systems for its crewed H2 helicopter.

The military vehicles application segment accounted for a dominant share of over 50.0% in 2020. Vendors operating in the military vehicles market are partnering with fuel cell technology providers to launch fuel cell-based military ground vehicles. For instance, in September 2021, Kia announced to launch of its first military fuel cell vehicle in 2028, which is likely to include small and light command vehicles and heavy trucks that can be equipped with arms and troops. 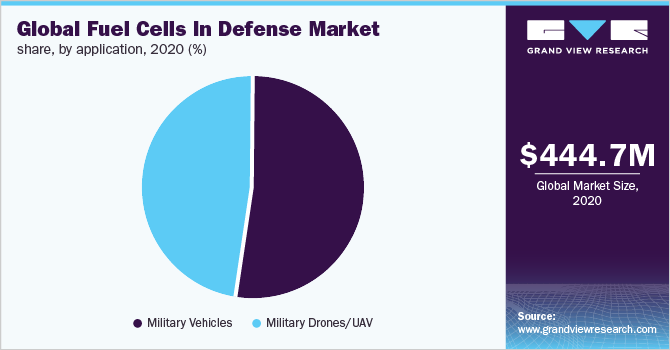 Technological advancement in the field of fuel cells for military drones is expected to drive the market over the forecast period. In August 2021, Honeywell announced to develop of an innovative Beyond Visual Line of Sight (BVLOS) technology suite for light drones, which allows them to fly three times longer and with less human intervention.

North America held the largest revenue share of over 35.0% in 2020 in the aerospace market. The North American fuel cell market is very beneficial for investments in various research projects that are getting commercialized. The U.S. is one of the major markets for fuel cells and is at the forefront of innovation with support from the U.S. Department of Energy (DOE). The U.S. Army and U.S. Navy are among the users of fuel cells in North America. Vendors operating in the market are continuously developing components of fuel cells that are used in rotorcrafts.

The European government has plans to considerably decrease GHG emissions. As a result, several countries in Europe have identified the implementation of innovative technologies, such as fuel cells (primarily PEMFC), as a way to meet these objectives. This, in turn, is expected to provide a significant opportunity for the fuel cell manufacturers in the market over the forecast period.

In January 2021, DLR, Germany’s aerospace center, announced that for the BALIS project, it is developing a 1.5 MW fuel cell powertrain that will be used by aircraft. The initial focus and goal of this project is the use of fuel cells in the aviation sector and emission-free air transport in Germany.

The market is highly competitive owing to continuous technological advancements being introduced by the existing vendors and new entrants. Industry players are focusing on strengthening their relations with system installers and are looking at collaborations and mergers as strategies to help them enhance their presence in the value chain and expand their geographical presence. For instance, in September 2021, SFC Energy AG partnered with Bharat Electronics and FC TecNrgy to investigate energy generation solutions in hydrogen fuel cells in the area of off-grid power supply for use in applications such as homeland security, civil protection, and defense. Some prominent players in the global fuel cells in the aerospace and defense market include:

This report forecasts revenue growth at the global, regional, and country levels and provides an analysis of the latest industry trends and opportunities in each of the sub-segments from 2017 to 2028. For the purpose of this study, Grand View Research has segmented the global fuel cells in aerospace and defense market report on the basis of aerospace (product & application), defense (product & application), and region:

How big is the fuel cells in the aerospace and defense market?

What is the fuel cells in the aerospace and defense market growth?

Which segment accounted for the largest fuel cells in the aerospace and defense market share?

Who are the key players in fuel cells in the aerospace and defense Market?

b. Some of the key players operating in the fuel cells in the aerospace and defense market include Plug Power Inc., Cummins Inc, Advent Technologies, and Honeywell International Inc.

What are the factors driving the fuel cells in the aerospace and defense Market?

b. Key factors driving the growth of the fuel cells in the aerospace and defense market include the increasing focus on decarbonization in the aerospace industry and rising spending on military drones/UAVs.