The global fuel cell market size was estimated at USD 10.48 billion in 2019, registering a CAGR of 15.5% over the forecast period. Increasing demand for unconventional sources of energy is one of the key factors driving the growth. Growing private-public partnerships and reduced environmental impact are other factors anticipated to propel the demand. Governments across the world are expected to supplement the developments by offering support in various forms, such as funding research activities and suitable financing programs. Developing a robust regulatory and policy framework is especially important as government enterprises need to provide an environment which is suitable for investment.

Stationary fuel cell accounted for an overall market share of 70% in terms of volume, in 2019. Factors such as flexibility to use different fuels, high efficiency, and utilization of direct current are the key factors expected to propel the demand for stationary fuel cells over the forecast period. 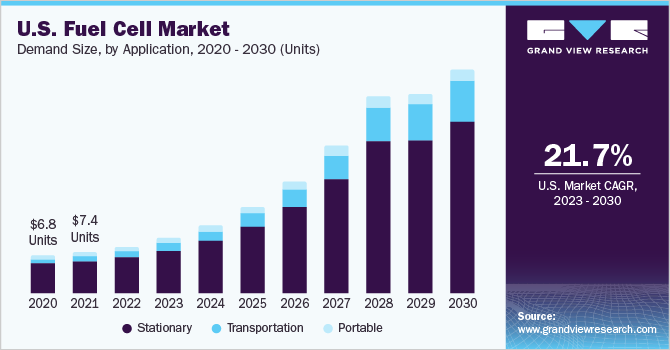 Encouraging regulations by the governing bodies in developed economies and eco-friendly objectives to eliminate emission rates propels the demand for hydrogen power plants during the forecast period. Rising emphasis by governments of developed economies, such as Europe and U.S and technological advancements for the replacement of electric grids are likely to further foster the growth.

Ongoing projects in Europe are anticipated to enable market participants to extend their product portfolio. Deploying cleaner technologies at a higher cost, challenges the innovative streak of most of the market participants. Use of fuel cell technology in various transportation modes is growing rapidly due to an increase in R&D for developing hydrogen powered vehicles.

Fuel cells generate electricity directly from hydrogen and oxygen and hence the power generated does not result in emission of carbon dioxide or any other environmental pollutants. When hydrogen is formed under this method, small amount of harmful substances are released. However, high cost of fuel cell systems resulting in high cost of FCEV may challenge the market growth. Investment risks such as capital and operational costs and under-utilization of various facilities pertaining to FCEV is likely to further hinder the growth.

Stationary fuel cells dominate the fuel cell market in terms of shipped units and accounting for a revenue share of USD 6.9 billion in 2019. Product versatility and high efficiency are anticipated to enable the stationary segment to maintain the leading position. Transportation segment is expected to be the fastest growing segment during the forecast period, due to rising demand for fuel cell powered forklifts and increasing R&D activities in developed economies of Europe. Portable fuel cell find application in personal electronics, portable products, laptops, mobile phones, APU, and consumer products among others.

Proton Exchange Membrane Fuel Cell (PEMFC) accounted for over 67.7% units shipped in 2019. PEMFC is widely used in applications, such as forklifts, automobiles, telecommunications, primary systems, and backup power systems. Versatility is a major factor slated to bolster their demand in the forecast period. 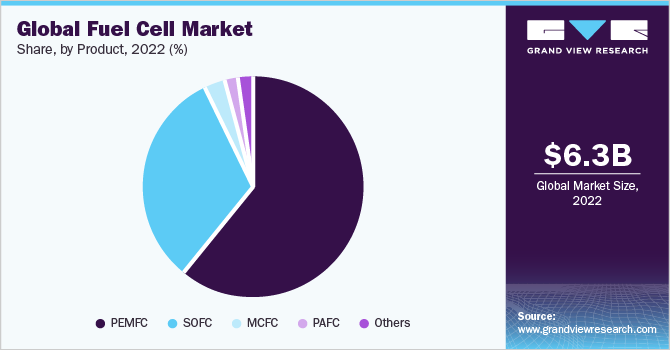 The U.S. Department of Energy (DOE) provides funding to Fuel Cell Technologies Office (FCTO), Solid Oxide Fuel Cell (SOFC), and other such fuel cell development programs. Solid Oxide Fuel Cell (SOFC) is likely to witness significant growth in the near future. Presence of all the solid components negates the need for electrolyte loss in SOFC. Their ability to operate at high temperatures minimizes the need for costly catalysts such as ruthenium.

Molten Carbonate Fuel Cells (MCFC) emerged as the largest product segment in 2019, registered a demand of 380 MW in 2019. Since molten carbonate fuel cells are widely used in large stationary power plants, the segment is expected to witness a steady growth in the forthcoming years.

In Canada, the federal government has provided funds to organizations and fuel cell companies. For instance, in 2017, the Canadian government invested USD 43 million for innovation in clean technology, of which USD 20 million investment was allocated to support clean energy projects in the pre-commercialization stage. Such funding initiatives by the government in the U.S. and Canada have driven the development and deployment of the product in North America. Europe's market will shift focus on public-private partnerships in the near future to accomplish the target of turning a low carbon economy and maintain a higher competitive edge.

The Asia Pacific is projected to continue holding a substantial market share in terms of volume during the forecast period. Japan is the major regional market followed by South Korea. The robust regional growth can be attributed to the high demand for Combined Heat and Power (CHP) systems in Japan and other countries in the region.

In order to deploy hydrogen fuel to the expanding application base and to implement economically viable new technologies, a proactive involvement and co-ordination between public and private companies will be required. In recent years, the market has witnessed a number of public-private partnerships with an aim to synchronize actions between stakeholders to secure funding. Also, several initiatives are undertaken by automobile manufacturers, oil and gas suppliers, and fuel cell producers for the successful introduction of hydrogen-powered vehicles to bear the investment risk.

Companies such as Ballard power systems, Fuel Cell Energy, Hydrogenics Corporation, Plug Power, and Ceres Power have high integration throughout the value chain. These companies have established themselves as the key manufacturers. They focus on R&D activities to develop cost effective fuel cell technology for automobile industry. Mergers and acquisition and product launches are some of the key strategies adopted by the market players. Ceres Power signed a development agreement with Honda R & D Co Ltd to develop solid oxide fuel cell stacks. This initiative helps the company to endorse its steel cell technology.

This report forecasts revenue growth at global, regional, and country levels and provides an analysis on the latest industry trends in each of the sub-segments from 2016 to 2027. For the purpose of this report, Grand View Research has segmented the global fuel cell market report on the basis product, application, and region:

What is the projected growth rate for Fuel Cell Market?

b. Fuel cell market is expected to witness a growth of over 15% from 2020-2027. Increase in demand for unconventional sources of energy drives the growth for Fuel Cell market.

What is the market share of stationary fuel cell in the overall market?

b. Stationary fuel cell accounts for 70% of the overall market in terms of volume in 2019. Biggest factors for the success of stationary fuel cell is its flexibility to use different fuels, high efficiency and usage of direct current, which eventually propel its demand.

What are the growth strategies adopted by key players in the Fuel Cell market?

b. Well established companies in the market are focusing on R&D activities to develop cost effective fuel cell technology for automobile industry. Companies are strategically acquiring and merging to maintain their growth.

Who are the leading companies in the Fuel Cell Market?

Which region will lead the global Fuel Cell market growth?

b. Asia Pacific is expected to lead in market growth during the forecast period. Japan being the largest consumer followed by South Korea.