The global fuel ethanol market size was estimated at USD 64.52 billion in 2016. The rising requirements for minimizing carbon emissions from gasoline in the automotive & transportation industry is likely to boost the usage of ethanol as a bio based additive over the next couple of years.

North America, Europe, and Central & South America have been the major consumers of the product for the past few years. Numerous developing countries in Asia Pacific such as China, India, and South Korea are major crude oil importers. Use of ethyl alcohol as a blending additive can be considered to benefit these countries in terms of improving energy security and efficiency of motor vehicles.

The U.S. accounted for the largest volume share of the global industry in 2016. Technological developments, presence of major market players, and stringent regulations over greenhouse gas emissions are expected to drive the product demand over the years ahead.

Archer Daniels Midland Company, Pacific Ethanol, Inc., and Flint Hills Resources LP are a few of the major players in the U.S. In January 2015, Flint Hills Resources LP purchased an ethyl alcohol manufacturing facility Southwest Georgia Ethanol, LLC, located in Georgia, U.S. The company aims to boost its presence as well as cater to the rising demand in the U.S. market.

Starch-based ethyl alcohol is considerably consumed as a gasoline additive in the U.S. This product type is manufactured by dry milling technology using corn kernel feedstock. In 2015, the country’s automotive producers approved the use of E15 and E85 product blends regulated by the U.S. E.P.A. Some of the key automotive players approving the use of E15 blend include AUDI, FCA Group, and Ford Motor Company.

Ethanol is manufactured by use of renewable or biobased raw material feedstock. Based on the feedstock type the market is classified into three product segments such as Starch-based, sugar-based, and cellulosic.

Starch-based segment held the largest volume share of the global market in 2016. Furthermore, it is estimated to witness growth at a CAGR of 5.8% by 2025. Starch-based product is manufactured by use raw materials such as corn, wheat, barley, and cassava. These products have a high starch content and are capable of reducing greenhouse gas (GHG) emissions to a considerable extent.

Corn based ethyl alcohol has resulted in minimizing the airborne emissions by nearly 20%, as stated by The U.S. Department of Energy. However, use of cassava as a suitable feedstock is expected to gain importance over the years ahead in developing countries including China and Thailand, owing to its rich starch content and ability to produce ethyl alcohol comprising high octane rating and good anti-knocking characteristics.

Automotive & transportation sector widely incorporates the use of ethanol fuel. Conventional fuel vehicles segment was the largest application of the industry 2016. In terms of volume, this segment is likely to expand at a considerable CAGR of 5.7% during the forecast period between 2017 and 2025. 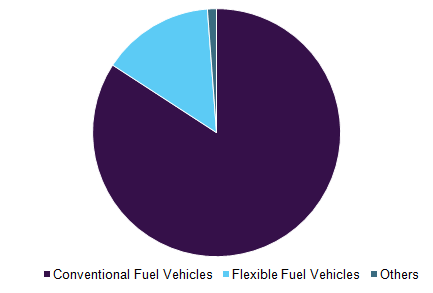 Conventional vehicles can utilize gasoline with low ethanol blends such as E10 and E15. E10 is a blend of 10% ethanol and 90% gasoline, while E15 comprises 10.5 to 15% ethanol respectively. The rising requirements of boosting fuel economy of conventional vehicles in countries including the U.S., China, India, and Brazil is expected to boost the product consumption in the future.

Flexible fuel vehicles (FFVs) segment is projected to illustrate fastest industry growth during the forecast period. These vehicles consist of internal combustion engines that are capable of operating on both gasoline and ethanol-gasoline blends ranging beyond E10 such as E85, also known as flex fuel. E85 comprises 51% to 83% ethanol blended with gasoline.

Rapid production of FFVs in Brazil, the U.S., and countries in European Union is considered to boost the usage of fuel ethanol in the next couple of years. Key automotive manufacturers such a Dacia, Toyota Group, and Volvo have launched cars designed for utilizing E85 blend. Other niche applications of the product include space heating and steam and power generation.

The industry is expected to rise at a robust growth rate especially in developing countries Regulatory policies and mandates imposed in India, China, and Mexico over the use of fuel ethanol in the automotive & transportation sector is expected to improve the long-term energy availability.

North America accounted for the largest share of 59.4% of the total market volume in 2016. This region is likely to be one of the fastest growing consumers of the product, owing to the presence of a well-established automotive industry and strict regulations over particulate emissions. This scenario is likely to reflect in the U.S.

Other countries in North America including Canada and Mexico have been implementing various environmental policies and programs for improving the industry growth. For instance, Canada signed The Paris Agreement in 2016 and announced its futuristic targets of minimizing emissions by nearly 30%, by the end of 2030. This regulatory scenario is considered to boost the use of low carbon intensity fuels and is ultimately to impact the ethyl alcohol consumption in the future.

Central & South America was the second-largest consumer of the industry in 2016, followed by Europe. Strong production of flexible fuel vehicles in Brazil and Argentina is likely to drive the demand for sugar-based ethanol fuel, over the years ahead. Raízen S.A., GranBio-API, and BP Biofuels are a few of the prominent players operating in the market.

Asia Pacific is likely to witness fastest growth during the forecast period. Rising number of foreign investments coupled with government initiatives towards sustainable development is expected to promote the use of biofuels over the next couple of years. This scenario is likely to be reflected in China, India, and some countries in Southeast Asia.

The market depicts high fragmentation. Product consumption and its penetration in regional application industries, the security of raw material feedstock, and high degree of forward integration are the major factors governing the competitiveness of the industry.

This report forecasts volume and revenue growth at global, regional & country levels and provides an analysis of the industry trends for each of the sub-segments from 2014 to 2025. For the purpose of this study, Grand View Research has segmented the global ethanol fuel market on the basis of product, application and region: