The global furfuryl alcohol market size was valued at USD 479.0 million in 2019 and is expected to grow at a compound annual growth rate (CAGR) of 6.2% from 2020 to 2027. The growth in the market can be attributed to increasing product demand for the synthesis of furan resins and in the formulation of thermoset polymer matrix compounds, cement, adhesives, coatings, and casting resins. At present, approximately 85% of the global furfural produced is converted to furfuryl alcohol, accredited to the latter’s demand in the manufacturing of furan resins. It is also widely used in the pharmaceutical, food, and polymer industries. Numerous uses of furfuryl alcohol comprise chemical structure block for drug synthesis, cleaning composites production, paint stripper, wood modification, and viscosity condenser for epoxy resins. It is used as a chemical building block for medical drug synthesis, specifically Ranitidine, which goes into the production of anti-ulcer drugs. 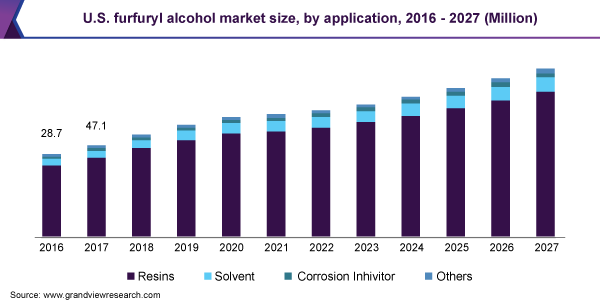 Furfuryl alcohol is used in tanks, containers, valves, and lines to circumvent potential leakage. The product is a prominent biobased chemical, which can also be used as a raw material. It can be used as a virtuous solution of dye and vanish. It can also be utilized in pesticide, rubber, and synthetic fabric applications. Growth of the green chemistry, sustainability programs, and innovative biobased value chains are some of the factors responsible for market growth. Chemical manufacturers are inclined toward the sustainable production of biobased/green chemicals that focus on the 12 principles of green chemistry. A paradigm shift, in terms of the production of green chemicals, has led to the development of various biotechnological routes, such as fermentation, biocatalysis, and enzymatic processes. The aforementioned factors have contributed in a significant way to the growth of the green chemicals market.

Various government initiatives and regulatory support are likely to foster green chemical manufacturing. For instance, in Europe, Registration, Evaluation, Authorization, and Restriction of Chemicals (REACH) supports the manufacturers of biobased/green products by providing them with opportunities to develop and market sustainable biobased/green alternatives. However, manufacturers need to comply with certain registration exemptions implemented by REACH.

Key end users in the developed countries of North America and Europe are inclined toward biobased and environment-friendly products, which has positively influenced the market growth. However, the outbreak of COVID-19 in Wuhan, China, has been disrupting energy supply chains, chemical trade, and altering demand patterns, thus hampering raw material prices. The developed economies in North America and Europe depend on China, South Africa, and the Dominican Republic for furfuryl alcohol. Additionally, restrictions on production and shipping have negatively influenced the furfuryl alcohol supply chain. Furthermore, staffing shortages and logistics issues are compelling manufacturing companies to cut down their production, which is estimated to hamper the market growth in the near future.

Resins led the market and accounted for more than 85.0% share of the global revenue in 2019. Furfuryl alcohol is predominantly used in resinous mortars for joining corrosion inhibiting bricks or tiles in the fabrication of storage tanks, reactors, floors, and fume stacks. The product is used for corrosion-resistant mortars and cement and erosion-resilient fiber-reinforced plastics. Increasing awareness about the effectiveness of the product as a corrosion inhibitor, coupled with its surging demand as an inhibitor in cement, grout, and mortar, is expected to trigger segment growth in the near future.

The solvent segment is expected to witness the fastest growth over the forecast period. The growth can be attributed to extensive usage of the product as an industrial solvent and precursor of chemical products, including furfuryl cyanide, halides, methyl furan, esters, and ethers. The surge in demand for low volatile organic compounds (VOC) and non-toxic solvents in agricultural formulations, petroleum refining, pharmaceuticals, paints and coatings, and several other end-use industries is anticipated to fuel the segment growth over the forecast period.

The foundry sector led the market and accounted for more than 80.0% share of the global revenue in 2019 and is anticipated to maintain its lead over the forecast period. Presently, furfuryl alcohol is utilized in binders for the regular furan no-bake system and in reduced quantities in furan gas-hardened, warm-box, and hot-box processes. In the foundry application, it competes predominantly with phenol, which is the raw material used for phenolic resins. Growth in the foundry industry due to a surge in metal casting production is estimated to boost the demand for furfuryl alcohol. In addition, presence of a large number of foundries in China, India, the U.S., and Japan, along with growing inclusion of products for manufacturing molds, is estimated to trigger the segment growth in the near future. 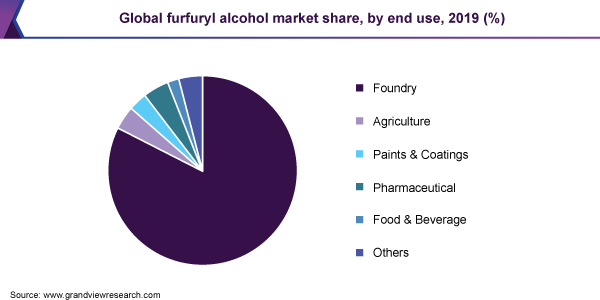 Furfuryl alcohol is used in agricultural applications, especially in pesticide formulations, as a cosolvent for active ingredients, such as gibberellic acid, mefenoxam, and propiconazole. It is also used as an adjuvant to support herbicides to penetrate the leaf structure. Tetrahydro furfuryl alcohol is used in the formulation of plant protection products. In addition, expanding agricultural sector, along with the surge in farm production in countries, such as China, India, U.S., Indonesia, Brazil, Turkey, Russia, France, Mexico, and Germany, is expected to fuel the demand in these economies over the forecast period.

Asia Pacific dominated the market and accounted for 67.1% share of global revenue in 2019 and is expected to maintain its lead over the forecast period. The growth can be attributed to increasing demand from end-use industries, such as paints and coatings, cement, construction, and agriculture. Factors such as stable economic growth, increasing industrial production, and consistent growth in automotive sales in economies, such as China, Japan, and India, are expected to fuel the product demand in the region.

Europe emerged as the second largest regional market for furfuryl alcohol in 2019, both in terms of volume and revenue. TransFurans Chemicals bvba is the only prominent manufacturer in Europe. Other players such as Silvateam S.p.a. do not contribute significantly as compared to high consumption in the region. Majority of the product is imported from China to fulfill the demand from several end-use industries. Dynea AS and ASK Chemicals are the prominent consumers of furfuryl alcohol in Europe. Dynea AS is engaged in providing various engineered wood, interior wood, wood-based panel resins, industrial coating adhesives, specialty adhesives and polymers, and surfacing solutions.

The market in China is moderately fragmented with a large number of small-sized and medium-sized manufacturers, which account for a majority of the market share. Top manufacturers such as TransFurans Chemicals bvba, ILLOVO SUGAR AFRICA (PTY) LTD., Hebeichem, Hongye Holdings Group Corp., Ltd. and Shandong Crownchem Industries Co., Ltd. also account for a prominent share in the market.

Key players in the market are integrated across the value chain and are also focusing on third party agreements for distribution, especially in North America and European markets. For instance, TransFurans Chemicals bvba has signed a distribution agreement with International Furan Chemicals B.V., a European distributor for the undisrupted supply of furfuryl alcohol. Moreover, ILLOVO SUGAR AFRICA (PTY) LTD focuses on backward integration as it is a key manufacturer of furfural in South Africa and uses furfural as a feedstock for furfuryl alcohol.

Manufacturers are inclined toward continuous investment in capacity expansion and process improvement for consistently meeting the growing demand from agriculture, pharmaceuticals, and foundry end-use segments. In addition, market players are constantly focusing on lowering the final operational costs by aiming for low utility consumption, low maintenance downtime, and improved utilization of resources. Some of the prominent players in the global furfuryl alcohol market include:

This report forecasts revenue and volume growth at the global, regional, and country levels, and provides an analysis on the latest industry trends and opportunities in each of the sub-segments from 2016 to 2027. Grand View Research has segmented the global furfuryl alcohol market report on the basis of application, end use, and region:

How big is the furfuryl alcohol market?

What is the furfuryl alcohol market growth?

Which segment accounted for the largest furfuryl alcohol market share?

b. Asia Pacific dominated the furfuryl alcohol market with a share of 67.0% in 2019. This is attributable to abundant production of raw material in China along with increasing demand from foundry industry.

Who are the key players in furfuryl alcohol market?

What are the factors driving the furfuryl alcohol market?

b. Key factors that are driving the market growth include growing demand for foundry binder resins, substantial production capacities in China, and increasing demand for bio-based chemicals.