The global gelatin market size was estimated at USD 2.91 billion in 2018 and is projected to expand at a CAGR of 8.0% over the forecast period. Growing awareness among food & beverage manufacturers regarding the importance of self-stabilization and emulsification properties of gelatin is driving the product demand. Gelatin is gaining prominence in micro encapsulation and pharmaceutical applications due to its control release of active ingredients and drug delivery abilities. Furthermore, rising demand for frozen foods in emerging economies like Turkey, Saudi Arabia, and Brazil is supporting new product launches, thereby boosting industry growth.

Europe was the largest market in 2018, in terms of revenue, and is expected to maintain its dominance during the forecast period. Increasing awareness regarding nutritional food ingredients in developed economies like Germany, U.K., and France is contributing to the market expansion. Presence of a well-established pharmaceutical manufacturing sector and robust healthcare infrastructure in U.K., Germany, and Belgium is supposed to remain a favorable factor. 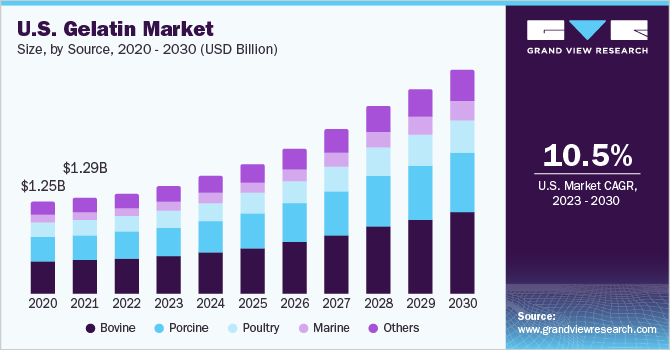 Positive outlook towards the healthcare sector in Thailand and Malaysia in light of increment in sales volume of pharmaceuticals is expected to promote the product demand in Asia Pacific region in the coming years. Also, growing awareness about the consumption of animal protein is expected to boost the demand further.

Growing importance of hydrocolloids for effective weight management in U.K. nutrition sector owing to rising concerns over sugar-related diseases is expected to promote the usage of gelatin as thickeners over the next eight years. Flourishing U.K. biotechnology sector owing to advancements in DNA visualization and increasing roles in photography applications will support further expansion.

In terms of volume, the bones raw material segment is expected to register the highest CAGR of 5.5% over the forecast period. Pig skin segment held the largest revenue share in 2018 and is likely to maintain its dominance over the forecast years. Europe was the largest market to use pig skin as a raw material for the manufacturing of gelatin and is anticipated to retain its position during the estimated period.

Asia Pacific is expected to be the fastest-growing market for pig skin as a raw material on account of increasing animal meat protein consumption in the region coupled with ban imposed on export of cattle by the government of China. Changing food habits, rising demand for pork, and increasing per capita income levels in the country is fueling market growth in this region.

However, stringent halal and kosher standards in Middle East is estimated to restrict the use of pig skin-based gelatin in food and beverages. Growing vegan and vegetarian population in U.S., Brazil, and other major cattle-producing countries is expected to affect the supply of bovine hides to use as a raw material in gelatin manufacturing, thereby hampering market development.

Europe stabilizer market held the highest revenue owing to growing demand for food products like pasta, salads, yogurt, ice creams, jams, and jellies. Thickeners is the second-largest function segment. Thickeners are used to increase the viscosity of a liquid without changing the properties. Growth of the food industry in Asia Pacific, owing to the growing population and per capita income levels in countries like India and China, is expected to drive the demand for gelatins as thickeners. Furthermore, usage of thickeners in cosmetics products is likely to fuel the segment growth over the coming years.

Gelling agent will emerge as the fastest-growing segment over the forecast period. Europe pharmaceutical industry has been a key contributor to the segment expansion over the past few years. Moreover, gelling agents are used across various industries, such as food, cosmetics, and photography sectors.

In addition, regulatory support in emerging economies like China and India will further increase the demand for gelling agents. 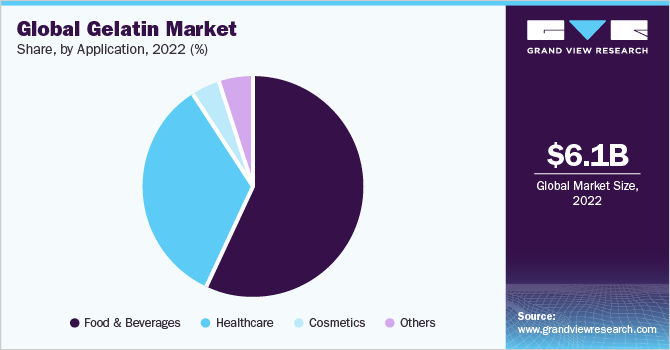 The product is widely utilized as gelling, stabilizing, foaming, and emulsifying agent in meat and dairy products, ice creams, jellies, cakes and pastries, aerated confectionaries, encapsulated foods, dietetic foods, and drinks. The personal care segment is estimated to experience a setback due to the existing hydrocolloid substitutes like xanthan gum and CMC in the cosmetics sector. Nutraceuticals was the second-largest application segment and is projected to expand further at a CAGR of 8.2% from 2019 to 2025.

Europe led the global market in 2018 and is expected to grow further at a CAGR of 7.8% during the projected period. Asia Pacific is projected to witness the fastest growth from 2019 to 2025. Growing emphasis on promoting healthcare in Thailand and Malaysia will support sales volume of pharmaceutical drugs and thus boosting the product demand. Growing number of fish farming activities in India and China is expected to facilitate many gelatin manufacturers in Asia Pacific to use fish as a raw material for the manufacturing of gelatin.

Ban on cattle-derived food products in India is expected to boost the usage of fish-based gelatins in sausages, ice creams, etc. over the forecast period. Rising demand for convenience foods in U.S. will drive the regional market in North America. Canada and Mexico are expected to remain the key regions in food & beverage, personal care, and pharma sectors in the regional market over the coming years.

Some of the key companies include Rousselot; Capsugel, Inc.; Catalent Pharma Solutions; Gelita AG; PB Gelatin; and Sterling. Approval by regulatory bodies like the U.S. FDA and Scientific Steering Committee (SSC) of Europe for the use of gelatin is positively impacting the market growth. The U.S. has conferred GRAS status on gelatin as it does not cause any deteriorating harm to human health. The European Union Regulation 575/2011 states that “the Catalogue of feed materials” lists gelatin as permitted feed material. M&A and product development are the key strategies adopted by market participants. For example, in January 2016, Capsugel acquired Powdersize and Xcelience, which helped improve its supply and manufacturing capabilities for a variety of solid dosage formulations.

This report forecasts revenue and volume growth at global, regional, and country levels and provides an analysis of the latest industry trends in each of the sub-segments from 2014 to 2025. For the purpose of this study, Grand View Research has segmented the global gelatin market report on the basis of raw material, function, application, and region: