The global genetic toxicology testing market size was valued at USD 1.16 billion in 2021 and is expected to expand at a compound annual growth rate (CAGR) of 12.7% from 2022 to 2030. Genetic toxicology testing finds various applications in sectors including food, cosmetics, pharmaceutical, and biotech. The increasing drug development and discovery, along with the rising use of pharmacogenomics, is anticipated to boost the demand for genetic toxicology data. Since it can assess the compounds that can induce genetic mutations or chromosomal damages. Additionally, the expansion of facilities and accessibility of funding across the globe is also a considerable growth determinant in the genetic toxicology testing industry. 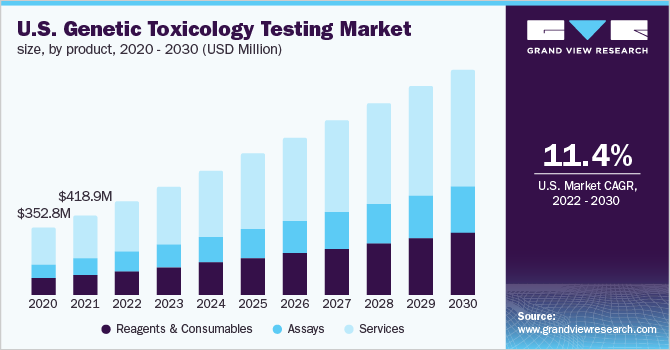 The COVID-19 pandemic is considered to have a devastating impact on society, the public healthcare system, and economies across the globe. However, the roles of genetic toxicology testing were neutral in the development of vaccines for COVID-19. Since it wasn't a mandatory requirement by the regulatory bodies from the companies. However, toxicity studies were being done to understand the mutation of the virus. Similarly, numerous researchers employed genotoxic to assess the effects of drugs against the COVID-19 virus. For instance, in September 2020, a team of researchers evaluated the impact of Chloroquine (CQ) and Hydroxychloroquine (HCQ) as prophylactic drugs against the virus.

The global genetic toxicology testing market is booming as a result of the rising demand for imports of novel food. Increasing imports of foods are compelling regulatory bodies to tighten the testing and other safety evaluation. According to the European Food Safety Authority (EFSA), ethnic diversity, rising globalization, and innovative sources of nutrients are the contributing factors to novel food imports. Novel foods include food that is produced with the assistance of technology, food with the addition of new ingredients/substances, and food through new sources. The list of novel food applications increased from four in 2010 to 39 in 2019. As a result, the requirement for genetics toxicology is anticipated to grow in the coming years.

The genetic toxicology testing market is witnessing increasing investments by key players for the expansion of lab facilities. This strategy accelerates the accessibility and availability of the service in the market. For instance, in November 2021, Gentronix, a UK-based contract research organization, announced to raise funding of USD 854,000 (£700 thousand) for the expansion of its lab facilities by enhancing its capacity for ocular, genetic, and skin toxicology testing.

An increasing focus on the reduction of animal employment for evaluation of the genotoxic potential of substances is anticipated to impact the costs and time required for genetic toxicology testing. Such changes in market dynamics are expected to open new opportunities for in-vitro testing and can expect a significant boost in market actions. One such development is, in July 2022 Inotiv Inc. announced to continue its expansion of capacity to conduct genetic toxicology studies for in vitro cytogenetics and bacterial assays to support the growing requirement for novel therapeutics.

However, the average cost of genetic testing ranges from under USD 100 to over USD 2,000, depending on the complexity and nature of the test. The cost accelerates with the number of testing or requires a sample from multiple family members to draw a meaningful test result. The results could take weeks to receive. In some cases, health insurance plans cover the genetic testing cost, when recommended by professionals. However, health insurance providers have different policies and coverage. Hence, genetic toxicology testing lacks uniformity in terms of insurance coverage and payout.

The in vitro segment held the highest revenue share in 2021 and is estimated to have similar momentum during the forecasted period. Ethical, scientific, and financial concerns about the use of animals in toxicology testing, have accelerated the interest in the mechanistic in vitro testing approach. For instance, in November 2021, a group of researchers assessed testing strategy with in vitro technique for genotoxicity. Employing in vitro approach resulted in low cost and was less time-consuming.

Similarly, the U.S. FDA released guidelines for the safety evaluation of food ingredients. The recommended genetic toxicity test by the agency includes, and a test employed in bacteria for gene mutations, and an in-vivo test using mammalian hematopoietic cells for chromosomal damage.

While the agency provides alternative options between in vitro mouse lymphoma thymidine kinase+/- gene mutation assay or an in vitro test along with the cytogenetic assessment of chromosomal damage via mammalian cells. The agency stated that there are compounds, wherein in vivo tests do not offer relevant insights. In such cases, in vitro testing is considered to be appropriate. Hence, the limitations of in vivo tests increase the preference for in vitro tests amongst researchers.

The service segment has captured the largest revenue share of 52.40% in 2021. The increasing strategic initiatives by Contract Research Organizations (CRO) through investment in this segment thereby propelling the market growth. For instance, in January 2022, Inotiv Inc. announced to scale up the study of toxicology by buying out Integrated Laboratory System (ILS) for USD 56 million. ILS is expected to offer additional capacity coupled with growth opportunities for Inotiv and expansion of in vitro and in vivo toxicology services.

The growth of the service segment is also propelled by the expanding range of services in skin and genetic toxicology testing. For instance, in December 2020, Gentronix announced the growth of its scope of services in the area of dermal toxicology to support the rising global demand. The company has projected an increase of 20% in revenue from new services throughout the year.

On the other hand, the reagents & consumables segment is expected to showcase the fastest growth during the forecasted period. The growth of the segment can be attributed to the expanding scope of applications followed by increasing requirements by regulatory agencies.

The pharmaceutical and biotechnology segment held the largest revenue share in 2021. The widespread use of genotoxicity testing in drug discovery and development is anticipated to be a contributing factor to the growth. As of May 2022, over 20,000 drugs are under active development, which is approximately an 8.22% increase from 2021.

Novartis AG reports for 213 products, while Takeda, Pfizer, Roche, and BMS, accumulatively account for around 1,000 products. Genetic toxicology testing is employed during the preclinical stage. According to the report of Pharma Intelligence UK Limited, several drugs in the preclinical stage experienced exceptional growth of 11%, that is from 10,223 in 2021 to 11,351 in 2022. 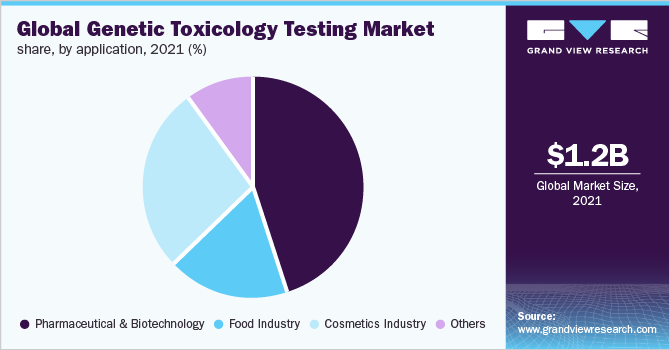 Furthermore, the pharmaceutical and biotechnology segment is reported to witness the fastest growth duringthe forecast period. Since the testing is a requirement for all levels of drugs and chemicals. Also, the strategy of testing is needed to be customized based on the applicable regulatory guidelines and outcomes observed in vitro.

The North America region led the industry with a revenue share of 40.90% in 2021. The regional dominance can be attributed to increasing drug development with strong investments in pipelines. Along with that, the existence of key players in the regions eases the accessibility of genotoxicology testing for pharma and biotech companies in the region. 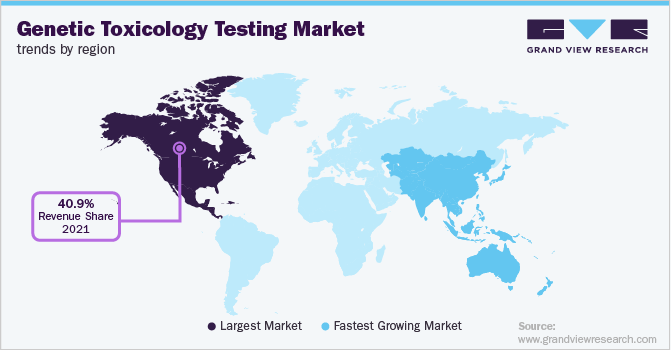 Asia Pacific is projected to expand at a CAGR of 14.6% over the forecast period, due to considerable developments by India and Japan in tightening the regulations on drug development and testing of novel food. Moreover, the development of laboratory facilities, coupled with increasing government funding for R&D and clinical development frameworks of emerging economies such as Australia and India have been the key growth determinants for regional growth.

Major players are designing and executing several strategies including increasing geographical footprint through mergers and acquisitions, leveraging economies of scale for developing products, and strategic collaborations to inflate their market presence. For instance, in July 2021, Inotiv Inc. announced the acquisition completion of MilliporeSigma’s BioReliance’s important genetic toxicology assets, including historic control data, standard operating procedures, client lists, and stock cultures. The contract research organization believes that this acquisition will assist in offering comprehensive solutions in human clinical trials to their clients. Some prominent players in the global genetic toxicology testing market include:

This report forecasts revenue growth at the global, regional, and country levels and provides an analysis of the latest industry trends in each of the sub-segments from 2018 to 2030. For this report, Grand View Research has segmented the global genetic toxicology testing market report based on type, product, application, and region: 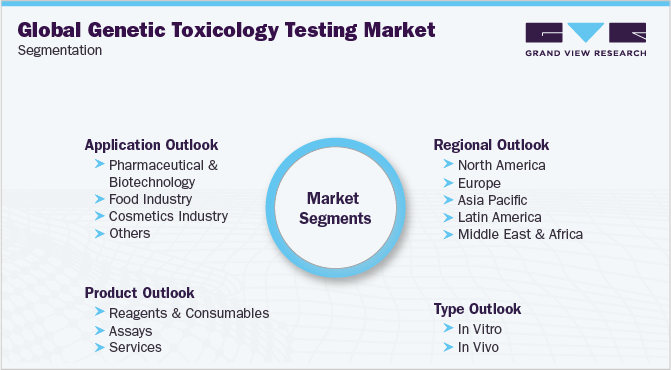 How big is the genetic toxicology testing market?

b. The global genetic toxicology testing market size was estimated at USD 1.16 billion in 2021 and is expected to reach USD 1.37 billion in 2022.

What is the genetic toxicology testing market growth?

b. North America dominated the genetic toxicology testing market with a share of 40.90% in 2021. This is attributable to increasing drug development with strong investment in the pipelines

Who are the key players in the genetic toxicology testing market?

What are the factors driving the genetic toxicology testing market?

b. Key factors that are driving the market growth include increasing drug development and discovery, along with the rising use of pharmacogenomics in the market, is anticipated to boost the demand for genetic toxicology market