The global geotextiles market size was estimated at USD 6.72 billion in 2021 and is expected to register a CAGR of 6.5% in the forecast period. Increased usage of geotextiles in a wide range of construction applications including roads, landfills, drainage structures, and harbors to enhance soil stabilization is anticipated to drive market growth over the forecast period. The extended lifespan and cost-effectiveness of geotextiles, coupled with growing environmental concerns regarding soil erosion, are projected to drive the demand for geotextiles. Promotional policies and initiatives by regulatory bodies have helped increase awareness regarding the benefits of geotextiles, thereby positively impacting the market growth. 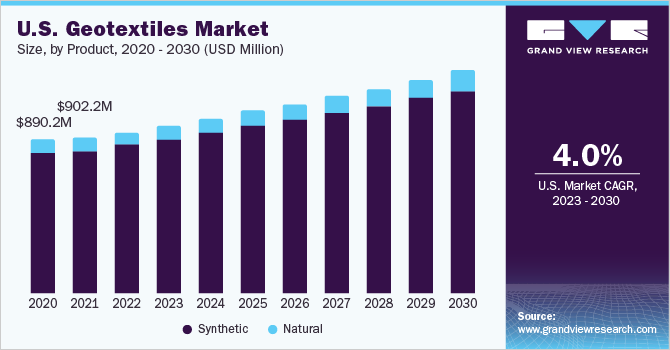 The increase in the usage of geotextiles in a wide range of construction applications in the U.S. such as drainage structures, harbors roads, and landfills with the purpose of enhancing the soil stabilization. In addition, the rise in adoption of the product owning to the extended lifespan and cost-effectiveness accelerate the market growth.

Woven geotextiles are manufactured from individual threads including fibrillated yarns, monofilaments, or slit films that are woven together to provide high load capacity for road construction applications. The long lifespan of these fabrics, coupled with their resistance to corrosion, drives their use for long-term applications.

In European economies such as Germany and U.K., manufacturers are required to comply with the stringent regulations established by governing bodies, which state the specific characteristics of the types of geotextiles and the applications they are most suitable for. The favorable regulatory framework for the application of these products, especially in erosion prevention applications, is likely to drive market growth.

Nonwoven geotextiles led the market and accounted for about 65% share of the revenue in 2021. The segment dominated the market on account of their high adoption in a wide range of applications such as construction, furniture, hygiene products, automobiles, medical products, agriculture, and packaging.

Woven geotextiles are anticipated to witness a CAGR of over 6.2% from 2022 to 2030 in terms of revenue. Increasing product penetration in erosion prevention applications owing to their favorable characteristics such as excellent filtration and high tensile strength is expected to fuel their demand over the forecast period.

Polypropylene geotextiles led the market and accounted for 57% share in 2021, as these geotextiles have excellent resistance against chemicals and inorganic salts. The rising demand for polypropylene from emerging economies in the Asia Pacific, primarily China, is anticipated to impact the raw material price trends over the forecast period.

The high heat resistance offered by polyethylene fibers is likely to fuel their demand for polyethylene-based geotextiles in construction industry in areas with high heat applications. The demand for high-density polyethylene (HDPE) in a wide range of industrial applications is expected to its availability as fiber for the textile industry, thereby impacting industry trends.

Non-woven geotextiles are increasingly being employed in the construction of roads, and drainages, and for the prevention of erosion on account of their function to provide an avenue for water flow. Furthermore, increasing product demand for infrastructure developments including roadways, railways, and bridges is expected to drive the market over the forecast period. 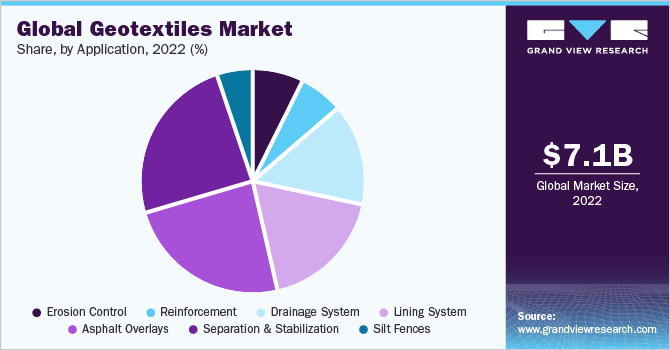 Geotextiles help prevent soil erosion as they are used for reinforcing soil. The product helps hold soil particles together and promote vegetation growth, which reduces erosion in the long run. In addition, clogging due to the washing away of soil is one of the major problems in drainage systems. The use of geotextiles in drainage systems helps create a channel for the consistent flow of water.

Asia Pacific dominated the market and accounted for about of 54% share of the revenue share in 2021. The increased foreign investments in the emerging economies of the region including China and India are anticipated to have a positive impact on the economic growth.Furthermore, the rising megacities in China and India is expected to drive the demand for geotextiles.

In the Middle East and Africa, geotextiles are widely used in road construction to increase tensile strength in the earth's mass, which aids in improved water permeability of constructed infrastructures. Increasing product demand for improving groundwater levels and reducing the risk of road damage is expected to drive market growth.

Increasing foreign investments in the industrial sector of Asian economies such as China, India, Thailand, and Indonesia are expected to impact the market positively. Furthermore, increasing megacities in China and India, coupled with robust infrastructure development, are expected to drive the product demand over the forecast period.

Major players in the market are entering into agreements with emerging and small-scale players to expand their distribution capacities and increase the market reach of their products. Furthermore, manufacturers are focusing on other efficient and effective distribution channels, to ensure that buyers have timely access to such products.

Prominent market players have been benchmarked based on their geographical reach, distribution networks, product portfolio, innovation, strategic developments, operational capabilities, and the market presence of their brands. Some prominent players in the geotextiles market include:

This report forecasts market share and revenue growth at global, regional, and country levels and provides an analysis of industry trends in each of the sub-segments from 2017 to 2030. For this study, Grand View Research has segmented the global geotextiles market report based on product, material, application, and region:

The shortage in supply of raw materials from Chinese manufacturers has resulted in a severe demand-supply gap. The manufacturers are further expected to be stranded on raw material orders owing to the logistics industry being significantly impacted due to lockdown amid COVID-19. However, the producers are expected to move away from China aiming to reduce the future risks that would affect the business and to reduce the manufacturers' cluster in a single country in order to smoothen the supply chain. The report will account for COVID-19 as a key market contributor.