The Germany and Netherlands medical marijuana market size was valued at USD 977.7 million in 2019 and is expected to grow at a compound annual growth rate (CAGR) of 13.0% from 2020 to 2027. Increasing the legalization and use of medical marijuana and its growing adoption for the treatment of chronic diseases are the key factors driving the growth of this market. In addition, the rising preference for prescribing marijuana for medical purposes is further increasing its adoption. Furthermore, affirmative legal advancements in the countries and increasing its use for varied health-related conditions are the other factors driving the market for medical marijuana. For instance, according to a 2019 report published by the Bank of Montreal, the number of medical marijuana patients post-legalization of medical cannabis in Germany has increased from 1,000 to around 30,000- 50,000. Hence, the rising demand for utilization of medical marijuana for therapeutic purposes is further propelling the growth of the market. 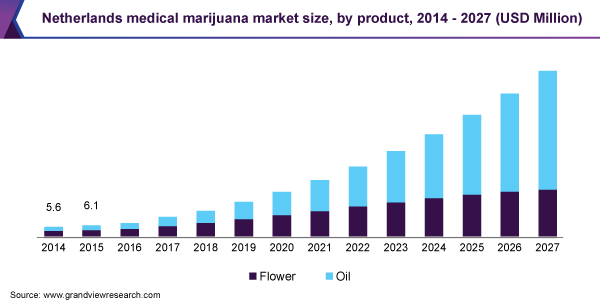 In addition, the presence of sophisticated healthcare infrastructure, technological advancements, increasing patient awareness, and acceptance regarding medical marijuana treatment is further propelling the growth. Moreover, increasing clinical trials and researches for the proclamation of its therapeutic benefits for various health conditions is anticipated to boost the market growth.

Furthermore, the rising prevalence of cancer is one of the major factors responsible for the increasing demand for medical marijuana treatment in Germany and the Netherlands. For instance, according to WHO, cancer is the second leading cause of death in the world and was responsible for about 8.8 million deaths in 2015. Hence, such a rising prevalence of cancer, coupled with allied health conditions due to heavy treatment (Chemotherapy or Radiotherapy)is anticipated to fuel the demand in the coming years.

Another factor that positively impacts the demand is the increasing preference towards marijuana extracts such as oils and tinctures. For instance, according to the data published by World’s Top Exports, in 2019, Germany accounted for the second-largest amount of cannabis oil imports. Cannabis oil imported by the country was worth around USD 240.0 million and thus, rising preference towards oils and tinctures is expected to propel the market growth during the forecast period.

Moreover, the sanctioning of medical marijuana for selected indications is likely to hamper the growth of the market. For instance, in the Netherlands, usage of marijuana is legal for patients suffering from AIDS, cancer, chemotherapy-induced nausea and vomiting, multiple sclerosis, neuropathic pain, and tics related to Tourette’s syndrome. However, other chronic conditions such as rheumatism and Crohn’s disease are not included in the list, despite the numerous positive clinical researches published. Therefore, if a larger number of health-related conditions can be cured using medical marijuana, the demand is likely to increase during the forecast period.

Based on product type, the flower dominated the market with a share of 63.9% in 2019. This high share is attributable to the increasing preference for the utilization of smoking flowers for therapeutic purposes. Furthermore, rapid onset of action with respect to the smoking of flower and its applications in alleviating chronic pain, reducing cancer, stopping the progression of Alzheimer’s disease, is further anticipated to propel segment growth.

In addition, the oil segment is expected to witness the fastest growth rate over the forecast period. This growth can be attributed to its advantages over the smoking of flowers. Moreover, physicians prescribing it to patients need to track the accurate consumption of CBD, THC, and other cannabinoids that are part of the dosage. Quantifying this information from smoked marijuana is difficult, therefore, a large number of physicians are prescribing oil and extracts to patients to keep a track of the quantity ingested in the body. Therefore, increasing preference towards the utilization of oils is expected to fuel the Germany and Netherlands medical marijuana market in the coming years.

Based on application, the chronic pain segment accounted for the highest revenue share of 40.0% in the market owing to the presence of legal medical marijuana programs in both the countries and increasing acceptance of medical marijuana to treat various chronic conditions. Furthermore, scientific literature supporting its benefits in the treatment of various diseases, including chronic pain is expected to propel the growth of the market during the forecast period. 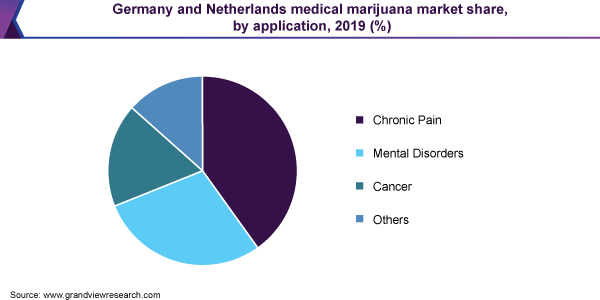 In addition, the mental disorders segment is expected to witness the highest CAGR over the forecast period owing to the increasing prevalence of varied mental disorders in the countries. For instance, as per a report published by DAK, in 2019, around 1 in 4 children in Germany suffers from some form of mental disorders. Furthermore, rising healthcare expenditures for mental disorders is anticipated to fuel the growth of the market.

Germany dominated the market with a revenue share of 98.0% in 2019. The increasing population of the country along with the high demand for medical use and liberal government regulations are some of the key factors fueling market growth. In addition, in 2019, three companies-Aurora Produktions GmbH, Aphria Deutschland GmbH, and Demecan GmbH-received license from BfArMto produce marijuana in the country. Hence, the sanctioning of cultivation licenses is further anticipated to boost the market growth.

In addition, in the Netherlands, the market is expected to exhibit lucrative growth over the forecast period owing to constantly improving provisions to supply high-quality strains of marijuana in the country and rising number of patients opting for the treatment. For instance, according to the NCBI report published in 2018, the number of Dutch patients using herbal marijuana on prescription increased from 5,601 in 2003–2010 to 10,826 in 2011–2016. Furthermore, a reduction in illicit sourcing of marijuana due to affirmative government reforms, coupled with rising demand from authorized marijuana dispensaries is likely to propel the growth during the forecast period.

Competition is intense among existing players attributing to the rise in demand for medical marijuana coupled with technological advancements. The rising demand in the market is expected to support the entry of new players in the future, fueled by increasing awareness and acceptance of marijuana for medical purposes. Furthermore, strategic expansions by companies in the form of mergers and acquisitions are expected to boost the competition and propel the growth of the market. For instance, in August 2019, Tilray entered into an agreement with a Germany-based company, Cannamedical Pharma GmbH, through its German subsidiary-Tilray Portugal-to export USD 3.3 million worth medical cannabis from Portugal to Germany. This partnership will help in the increasing foothold of Tilray in Germany. Some of the prominent players in the Germany and Netherlands medical marijuana market include:

This report forecasts revenue growth at country levels and provides an analysis of the latest industry trends in each of the sub-segments from 2014 to 2027. For the purpose of this study, Grand View Research, Inc. has segmented Germany and Netherlands medical marijuana market report on the basis of product, application, and country:

b. The Germany & Netherlands medical marijuana market size was estimated at USD 977.7 million in 2019 and is expected to reach USD 1.3 billion in 2020.

b. Chronic pain dominated the Germany & Netherlands medical marijuana market with a share of 40.4% in 2019. This is attributable to a rise in the acceptance of medical marijuana for pain management owing to the presence of a large number of active compounds, especially THC and CBD.

Who are the key players in Germany & Netherlands medical marijuana market?

What are the factors driving the Germany & Netherlands medical marijuana market?