The global commercial drone market size was valued at USD 5.80 billion, with an estimated 274.6 thousand units sold, in 2018. The market is anticipated to register a CAGR of 56.5% during the forecast period. These Unmanned Aerial Vehicles (UAVs) are finding increasing application across the entertainment, agriculture, and energy sectors, which is ultimately expected to impact the market growth positively. Initially viewed as a military device, UAVs have established a significant presence in the commercial world over the past few years.

One of the key factors driving their demand in commercial sectors is the fact that UAVs have the ability to perform hazardous tasks, such as inspecting utility pipelines, with higher precision and cost-effectiveness as compared to the conventional methods. Newer drone-supportive regulations by government bodies worldwide are expected to lower the entry barriers for new startups and innovators providing commercial operations of UAVs. Leading technology giants have demonstrated the utilization of UAVs in delivering goods from the warehouse to the customer. The introduction of commercial drone delivery services is expected to foster various innovative forms of cargo transportation capabilities such as transport of temperature sensitive commodities and emergency medicines. 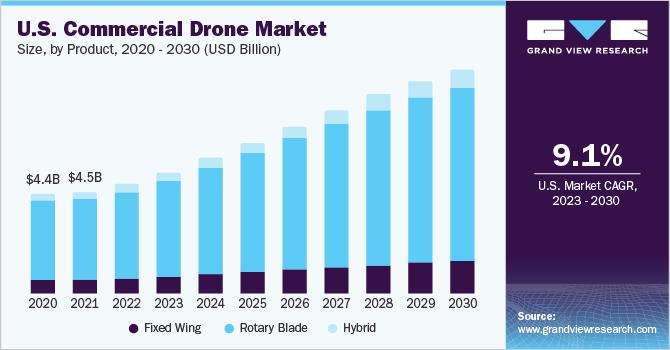 Drone manufacturers and Unmanned Aerial System (UAS) providers across the globe are developing custom-made industry-specific solutions to effectively address the business needs of their customers. Advancements in UAV technologies have made it possible for the manufacturers to produce a wide range of models in different sizes, weights, and shapes, which are capable of carrying different sensor payloads, making them useful across a broad application base.

Factors such as the upsurge in UAV venture funding; technological developments; and rising application in commercial sectors, including 3D mapping and drone delivery; are expected to contribute to market growth. However, several security and safety concerns, scarcity of trained pilots, and UAS traffic management issues are some of the factors that are anticipated to challenge the growth of the commercial drone market to some extent.

There has been an increasing demand for drones in the commercial sector as they provide enhanced productivity through improvement in graphics visualization and an overall reduction in the cost of the project. The use of UAVs has demonstrated a notable improvement in surveying accuracy, primarily in the real estate and construction sector. The reduction in cost and time associated with such activities is leading to the increasing utilization of UAVs in these sectors. This trend is expected to create new job opportunities and add value to overall economies.

Filming and photography is expected to emerge as the maximum revenue generating segment over the forecast period. It was valued at around USD 1.86 billion in 2018 and is expected to witness profound growth over the next six years. Drones are increasingly being used to film movies, record events and functions, and to carry out aerial photography. The advent of UAVs is set to transform the media industry as it allows the journalism sector to cover news in areas where human entry is prohibited. Such devices also find applications in efficiently shooting action sequences in movies from an aerial view and photographing inaccessible places.

The inspection and maintenance segment exhibits substantial growth potential and is projected to gain traction over the forecast period. The introduction of new guidelines (Part 107) by the Federal Aviation Administration (FAA) has opened up various opportunities for the energy and oil and gas companies to use UAVs for their day-to-day business operations. Rising adoption by utility companies is expected to change the way these companies conduct maintenance and inspection operations.

The precision agriculture segment is expected to witness considerable growth as drones have now become one of the most critical aspects of managing vital operations of farms. These devices help farmers in a wide variety of tasks, which include analysis and planning of crop plantation and field monitoring to determine the growth and health of crops.

Rising adoption of drones in the real estate and construction sector has led to a significant transformation of conventional business processes within the industry. The real estate and construction end-use segment is expected to witness substantial growth over the forecast period on account of the increasing need for UAVs in surveying lands, providing constant and reliable project updates, improving safety, and preventing hazardous situations on construction sites.

Increasing demand for the development of advanced farming techniques is expected to drive the commercial drones market in the agriculture segment over the forecast period. Growing awareness regarding the implementation and benefits of these devices in several agricultural activities among farmers is poised to support the growth of the end-use segment.

The use of UAVs for transferring surveillance data, such as high-resolution images and videos, in real-time, to base locations is expected to drive the market for drones in the security and law enforcement vertical. These devices produce minimal noise, can move in narrow and confined spaces, and possess the ability to be equipped with thermal sensors and night vision cameras, which allows them to provide necessary imagery for surveillance operations.

Delivery and logistics is anticipated to emerge as the fastest growing segment over the next six years. This can be attributed to the fact that UAVs offer relatively cheaper and quicker delivery of goods from warehouses to customers as compared to the conventional delivery methods. The use of drones in this sector is expected to increase the online retail sales as fast, and free shipping drives customers to shop online.

The global demand for fixed-wing drones is poised to expand at a CAGR of over 60% in terms of volume from 2019 to 2025. They are generally preferred in larger areas for activities such as topographic surveys, aerial mapping, and terrain modeling, due to their ability to fly at high altitudes for long periods. The hybrid drones segment is anticipated to experience the highest CAGR over the forecast period, attributed to the fact that they can provide increased range, power, and payload size as compared to their battery-powered counterparts. 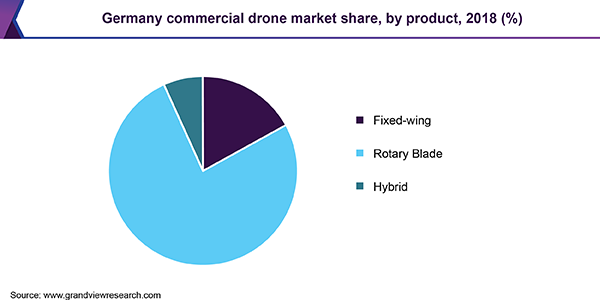 The rotary blade/multirotor segment led the market in 2018 and is projected to maintain its dominance over the forecast period. These products can be used in small and confined spaces with no special requirement for take-off and landing as such devices possess the ability of vertical takeoff and landing. Increasing demand for such UAVs in specific applications that require precise maneuvering and the ability to maintain a visual on a single target for long durations is anticipated to drive the segment growth over the forecast period.

North America accounted for the largest market share in terms of revenue in 2018 and is anticipated to continue leading over the next six years owing to favorable government initiatives regarding the advancement in drone technology coupled with the growing demand from businesses for drone-acquired data. Moreover, the Federal Aviation Administration (FAA) in the U.S. has released new regulations to provide more coherent and consistent guidelines concerning the legal and safe operation of UAVs in commercial spaces. Such rules and regulations are expected to reduce entry barriers and increase regional product adoption.

Asia Pacific is expected to witness the fastest CAGR over the next six years. Countries such as China and Japan are increasingly adopting automation and advanced technologies across a wide range of industries to counter rising labor costs. The higher efficiency of UAVs as compared to manual labor for certain tasks, particularly in the agricultural sector, is expected to drive their adoption across the region. The sales of drones in Europe is steadily rising due to several favorable regulations. Companies operating in the regional market are exploring new ways to transform their conventional business processes by leveraging the benefits offered by drones.

The demand for UAVs in the Middle East and Africa is expected to rise, particularly in inventory management and monitoring applications across the well-established oil and gas industry and utility sector of the region. Moreover, the regional oil and gas sector is increasingly adopting UAVs for pipeline inspection and maintenance applications. The adoption of drones is gaining momentum in the African countries majorly within the medicine and agriculture industries. Governmental bodies across the key African countries, such as Tanzania, have partnered with delivery companies, such as Zipline, to carry out deliveries of medical supplies and blood to inaccessible and rural areas.

Some of the prominent companies operating in the market are DJI; Parrot Drones SAS; Xiaomi; AeroVironment Inc.; 3D Robotics; INSITU; and EHANG.Increasing funding by Venture Capitals (VCs) and collaborations with government agencies and technology giants are expected to create several growth opportunities for market players. Technology licensing, mergers and acquisitions, new product launches, and strategic partnerships are some of the key strategies adopted by the companies to gain a competitive edge.

This report forecasts revenue and shipment growth at the global, regional, and country levels and provides an analysis of the latest industry trends in each of the sub-segments from 2014 to 2025. For the purpose of this study, Grand View Research has segmented the global commercial drone market report on the basis of application, product, end use and region:

How big is the commercial drone market?

What is the commercial drone market growth?

Which segment accounted for the largest commercial drone market share?

b. North America dominated the commercial drone market with a share of 34.9% in 2019. This is attributable to favorable government initiatives regarding the advancement in drone technology coupled with the growing demand from businesses for drone-acquired data.

Who are the key players in commercial drone market?

What are the factors driving the commercial drone market?

b. Key factors that are driving the commercial drone market growth include increasing application of UAVs across the entertainment, agriculture, and energy sectors and implementation of newer drone-supportive regulations by government bodies worldwide.