The global agar agar gum market size was estimated at USD 214.98 million in 2015 and is anticipated to grow at a CAGR of 4.9% from 2016 to 2025. Growing demand for dairy products in line with the westernization of diets has aided industry growth in recent years. The product is widely used in dairy products such as milk, cheese, yogurts, creams, custard, curd, spreads, mousses, puddings, infant-formula, confectioneries, beverages, and smoothies.

Dairy products that require more or less firm gel structure use the additive to stabilize their shape and consistency and thus preserve their optical freshness during shelf life They provide an added advantage to food manufacturers as the gels are not affected during the manufacturing process and display high thermal stability. It can thicken, jellify, and stabilize the food items at a low concentration level of 0.04% without any technical support.

Agar-agar is a unique natural hydrocolloid obtained from the red seaweeds of Gelidium and Gracilaria. These gels are considered more compact and resistant as compared to other gelatin or carrageenan gels. The product’s gel strength is also considerably higher as compared to gelatin. The product also eliminates the need for the addition of any foreign substance such as acids, sugar, proteins, and cations for optimizing food texture or flavor.

However, the agar agar gum market is expected to face challenges since the yield from the base raw material, seaweed, is extremely limited, while its supply is also constrained. Major companies such as Thermo-Fischer Scientific have also halted supply of two agar products, namely bacteriological LP0011, and technical LP0013 on a temporary basis to maintain the supply of manufactured dehydrated culture media(DCM) to customers.

The production and supply of this product are also geographically limited and there have been several shortages in the recent past. Major factors hampering its production include meagre quality and availability of its raw materials.

Powdered products accounted for over 90% of the overall volume share in 2015 and is expected to grow at 3.7% CAGR from 2016 to 2025. Clear colored powders are widely utilized in industrial & scientific applications including bacteriological culture and plant tissue culture media.

PT. Agarindo Bogatama, a Jakarta-based company is a major manufacturer of such powders, catering to bakeries, confectioneries, meat, dairy, and liquid desserts among other applications in the food industry. 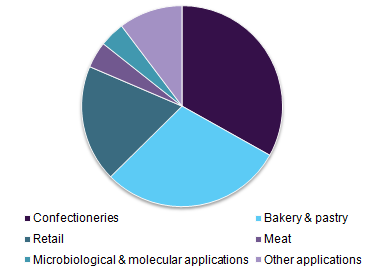 Other products such as strips and squares are also increasingly being used in household consumer applications, including the preparation of traditional dishes. These segments are expected to witness growth in relation to transitioning consumption patterns as more consumers opt for Halal & Kosher-certified products in place of conventional gelatin.

The confectionery segment is likely to remain the dominant application, with over 33% of the volume share in 2015. The gum is used as an archetypal gelling agent in aerated confectionery products such as marshmallows. Conducive gelling properties have also made the product a favorable option for preparing fruit confectionary which is highly popular in Asian countries.

Excellent heat resistance and stabilizing properties of the product have also spurred its demand in ice creams, pie fillings, meringues, and other desserts in the pastry & bakery industries. Rising consumer awareness regarding the benefits of baked foods in terms of lower fat content and healthier digestion is promoting segment growth as well.

Microbiological & molecular applications are anticipated to emerge as one of the fast-growing segments at 4.2% CAGR from 2016 to 2025. The product is widely used to stimulate bacterial growth in Petri-dishes for laboratories across the globe.

Europe emerged as the dominant regional market owing to high demand from consumers & food processors alike. Companies are actively attempting to invest in the European market by participating in food ingredient shows to introduce greater product variety and lower-cost alternatives to gelatin and conventional products.

The proliferation of healthier foods in an attempt to keep up with transitioning consumer preferences and growing diet consciousness is also conducive to industry growth. European companies are attempting to collaborate with development partners in Indonesia and other emerging economies to expand their presence and reach a wider audience.

The State Secretariat for Economic Affairs (SECO) had set the Swiss Import Promotion Programme (SIPPO) that connects the European importers with high-quality suppliers from partner countries. Other regions such as Asia Pacific are anticipated to grow at about 4.1% CAGR, which is much higher than Europe, owing to expanding food processing sector & rising consumer disposable income.

Indoalgas, a major manufacturer based in Indonesia, has also announced capacity expansion of 350 to 450 tons in order to fulfill burgeoning market requirements. Other companies are also attempting to do the same and streamline their operations, introduce new products, or boosting existing capacities for a competitive edge.

This report forecasts volume and revenue growth and provides an analysis of the latest trends in each of the sub-segments from 2014 to 2025. For the purpose of this report, Grand View Research has segmented the global agar-agar gum market on the basis of product, application, and region