The global glycol market size was estimated at USD 30.41 billion in 2018. It is expected to expand at a CAGR of 6.7% from 2019 to 2025. Derivatives of glycol are used across a wide range of sectors that include automotive & transportation, food & beverage processing, heating, ventilation and air conditioning (HVAC), and polyester fibers. The recent turnaround in the economic outlook of western markets, as a result of recovering manufacturing activities, has led to a positive impact on the growth of the market.

During the time of increased regulatory oversight, glycols have come under the intense scrutiny of agencies, such as the U.S. EPA and FDA, regarding their detrimental effects on human health. Though propylene glycol is classified as generally recognized as safe (GRAS) by FDA, the agency has stipulated acceptable daily intake levels to protect human health. Similarly, studies have been conducted by EPA regarding the toxicology profile of glycols and prescribed recommendations for handling and usage of these chemicals. 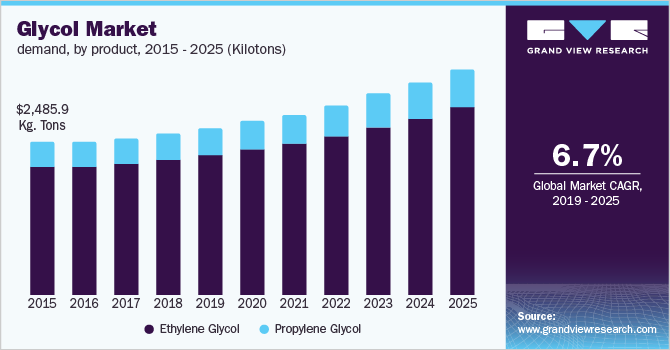 Regulations, as stated above, cast a critical role in the industry’s dynamics, wherein compliance procedures, inventory protocols, and manufacturing standards evolve based on changes to existing policies. Such intervention at state-levels also gives rise to a greater emphasis on the development expenditures of companies, which are generally dominated by changing customer preferences and product standards.

Across the chemicals industry, there is an evident effort by companies to improve the efficiency of supply channels and reduce uncertainties associated with cost components. As the world opened-up to virtual marketplaces, the chemical sector has also caught up with the trend. Various online platforms, these days, sell chemicals (including glycols) to end-users through such portals.

From a consumer’s perspective, a virtual marketplace provides ease of procurement. Whereas, from a vendor’s perspective, costs associated with physical infrastructure can be reduced by marketing their products online. For the market, this trend has been instrumental in improving the profit margins of companies and also broadens their customer base without vying for a physical presence in foreign markets.

The market, based on the product, has been classified into propylene glycol (1,2-propanediol) and ethylene glycol (1,2-ethanediol). These products cater to a diverse range of application sectors. Propanediol is widely used in the manufacturing of polyester compounds and as a solvent, the chemical is used for food coloring, flavoring, paint dispersions, and plastic resin manufacturing.

Ethylene glycol is widely used as an antifreeze, coolant, and heat-transferring agent. In addition to its ability to bring down the freezing point of fluids, the chemical also functions as a reagent in the production of polyesters, alkyd resins, synthetic waxes, and explosives. Furthermore, the ethylene-based glycols also find usage as an ingredient in printing inks, paint solvents, and hydraulic fluids.

As of 2018, the global GDP expanded by nearly 3.7%, as industrial activities recovered across developed nations and evolved considerably across developing parts. This growth in the global economy shaped a promising future for glycol manufacturers. Automotive will be the fastest-growing application segment during the forecast period. 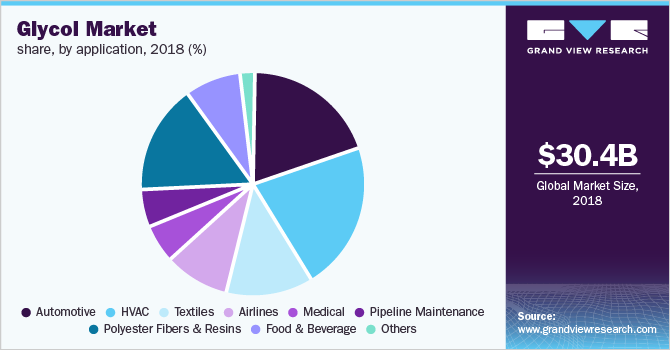 Globally, automotive production grew by 2.4% and reached 97.3 million units in 2017, with a few European countries, including Netherlands, Finland, Portugal, Slovenia, Russia, and Ukraine, registering double-digit growth rates. Europe maintains a dominant role in glycol demand, positive macro indicators, as stated above, should be a source of optimizing the glycol industry’s growth forecast.

North America and Europe have traditionally been the powerhouse of manufacturing technologies and innovative approaches to build industry ecosystem. Although these regions collectively accounted for nearly 50.0% of the global demand, the market has witnessed a large shift in production landscape towards Asian markets with China positioning itself as a regional as well as a global hub for manufacturing.

There exists a high level of competition among players as a result of surging demand for glycols across various industries. High opportunities present in developing nations have led to the establishment of regional small-scale players, while numerous glycol recovery companies have surfaced across North America.

This report forecasts volume and revenue growth at global, regional, and country levels and provides an analysis of industry trends in each of the sub-segments from 2014 to 2025. For the purpose of this study, Grand View Research has segmented the global glycol market report on the basis of product, application, and region: