The global green & bio-based solvents market size was valued at USD 5.4 billion in 2015 and is expected to witness significant growth over the forecast period. The market is primarily driven by rising demand from key application segments such as paints and coatings, adhesives, and pharmaceuticals. Growth of the paints and coatings, as well as adhesives industries, can be attributed to increasing population and resultant growth in industries such as real estate, public works, and building and construction.

These products find significant demand in applications such as paints and coatings, industrial and domestic cleaners, adhesives, printing inks, pharmaceuticals, and cosmetics. Increasing R&D capabilities of the manufacturers for the development of additional feedstock and manufacturing technologies to facilitate large-scale production is another key factor driving the market. 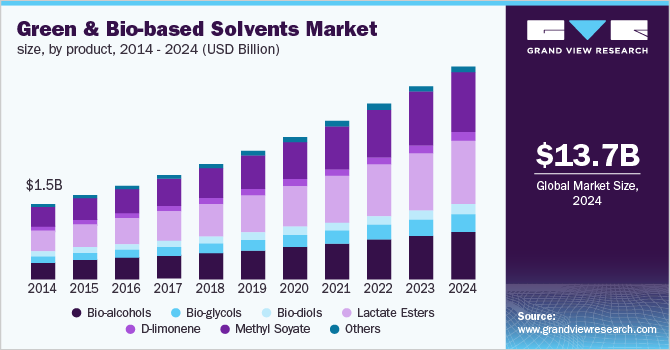 Asia Pacific is estimated to witness the highest growth during the forecast period, owing to availability of raw materials, low cost of production, presence of a large number of manufacturers, and high demand for environmental-friendly solvent solutions for several end-use verticals. Growing middle-class population and rising disposable income in the region have led to rising consumer awareness regarding environmental impacts of paints, coatings, and adhesive products with high-VOC content.

Based on the product, the green and bio-based solvents market is categorized as bio-alcohols, bio-glycols, bio-diols, methyl soyate, and lactate esters. Globally, lactate esters dominated the overall industry with a revenue of over USD 1.5 billion in 2015. This segment is also expected to witness the highest growth during the forecast period due to increasing applications, easy availability of the raw materials such as lactic acid, and low production cost.

Methyl soyate is one of the major product segments in the overall market. The segment is projected to register a CAGR of over 11.0% during the forecast period. This growth can be attributed to rising demand for methyl soyate in automotive, industrial equipment, and engine applications. 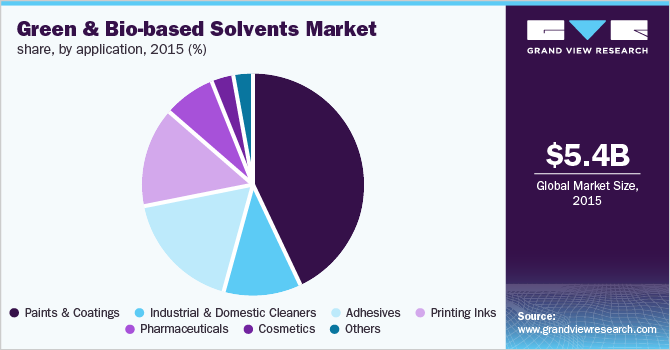 The adhesives segment is expected to register the highest CAGR of over 12.0% in terms of revenue during the forecast period. This rapid growth can be attributed to increasing demand from the automotive industry, which is witnessing significant growth in Asia Pacific and North America.

Awareness regarding effects of chemical-grade industrial solvents on environmental and human health is increasing across the globe. This, in turn, is driving the demand for bio-based alternatives in core applications such as paints and coatings as well as adhesives in the end-use industries, including construction and automotive.

Asia Pacific and Latin America are likely to offer significant growth potential for the market over the coming years. The growth is attributed to technological advancements, industrial and economic growth, and low production cost in countries such as Brazil, China, and Japan. Moreover, in recent years, end-use industries such as building and construction as well as automotive have been witnessing significant growth in these countries.Asia Pacific is expected to witness the highest growth during the forecast period primarily due to rapidly growing construction and automotive industries in the region.

The industry in Europe is currently witnessing moderate growth, mainly driven by changing political and economic dynamics of major countries such as U.K. and Germany. The recovery of the automotive and construction sectors in these countries will enable market growth in Europe.

Key players in the global market include BASF SE, Huntsman Corporation, Archer Daniels Midland Co., The Dow Chemical Co., and DuPont. These players are focusing on new product developments and partnerships as key strategies for strengthening and sustaining their positions in the global market, amidst the intense competition from suppliers and manufacturers in Asia Pacific.