The global heavy construction equipment market size to be valued at USD 90.4 billion by 2025 and is expected to grow at a compound annual growth rate (CAGR) of 5.4% during the forecast period. Increased investment in the infrastructure sector is expected to drive growth over the forecast period. Heavy-duty construction equipment is likely to witness high demand from the infrastructure sector owing to a rise in construction activities. The U.S. construction sector has witnessed sluggish demand in the last few years. Despite this slowdown, spending on non-residential private construction increased from USD 267 billion in 2010 to USD 400 billion in 2016. Steady investment in the industry is expected to be a key catalyst in market growth. 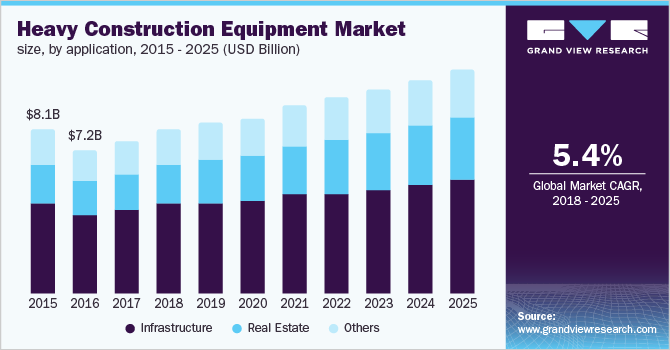 The construction sector in the country has seen steady growth in 2017 owing to high demand from the residential segment and this has boosted the demand for heavy-duty equipment. Unit sales increased by nearly 9,675 in 2017 from that in 2016. Positive dynamics of the real estate sector across cities such as Seattle, Austin, Dallas, and Fort Lauderdale is likely to spur infrastructure development activities, thereby fueling the market growth over the forecast period.

A steady rise in the price of residential properties, coupled with an increase in demand for residential homes, is driving demand for new investments in the sector. Seattle posted the highest growth in housing prices in 2016, clocking in a 10.7% increase. New housing units witnessed a year-on-year growth of nearly 6.2% in February 2017, according to the U.S. Census Bureau.

The market is highly concentrated in nature, with the majority held by Caterpillar in 2016. Other industry players include Volvo and Komatsu. Market players have also started selling refurbished equipment backed by warranty certificates to increase their industry share.

However, a major concern for this industry was a drop in the export of several kinds of machinery across the globe. The Association of Equipment Manufacturers revealed that the U.S. export of construction machinery witnessed a decline of nearly 17% in 2014 in comparison to figures in 2013. This trend continued in 2015 and total export declined by nearly 25% from 2011 to 2015. Exports in the Asia Pacific declined by nearly 38% from 2011 to 2015. Even at such a time, Chinese manufacturers stayed strong, with XCMG and SANY among the leading manufacturers of construction machinery.

The increased focus on infrastructure as well as the advancement of automation in manufacturing and construction processes has a positive impact on industry growth. The road construction machinery market has grown significantly in recent years as a result of increased road development programs conducted by various central and state governments. The rising incidence of such initiatives in the Asia-Pacific region is driving the market growth in the forecast period.

Renting or leasing construction equipment is becoming more popular due to the increase in the price of the machinery and the maintenance process. In addition to the low cost, there are several other advantages to renting construction equipment. Leasing companies provide machinery as well as required professional workers and drivers. Owing to such benefits and a shift in consumer preference towards rental, the market is expected to expand in the forecast period.

Region-specific government regulations are one of the major challenges that heavy construction equipment companies face. To begin heavy construction, a company must go through a lengthy and strict method of getting a permit after passing various required checkpoints. For instance, the construction industry makes use of diesel engines than any other industry and due to this factor proper benchmark information is collected to adequately characterize the environmental condition of the area to meet the EU emission regulations. This is expected to hamper the market growth in the forecast period.

Earthmoving machinery is likely to dominate the market over the forecast period. Product demand is largely catered to by developing countries such as India, Malaysia, and Indonesia. These countries have invested in the development of transport infrastructure, which majorly uses earthmoving machinery, to support economic growth. For instance, the East Coast Rail Link project to link Malaysia’s eastern and western region commenced in August 2017. This project is valued at nearly USD 13.0 billion and is a part of China’s ambitious “One Belt and One Road” infrastructure program.

Concrete and road construction equipment constituted 18.9% of the market by revenue in 2016. Concrete and road machinery include equipment such as asphalt pavers, rollers, and transit mixers, which are used in the development of roads and handling or transporting concrete material. Road construction projects are anticipated to be a key driver for the growth of this product segment. For instance, in the U.S., investment in roadways construction is expected to increase from nearly USD 91.0 billion in 2016 to USD 99.0 billion by 2020.

Heavy-duty construction equipment is majorly used in the infrastructure sector and thus 49.9% of the market was held by this sector in 2016. Increased urbanization has created a global demand for better transportation systems. As countries develop plans to meet this demand, the infrastructure sector is expected to grow significantly over the forecast period, with the majority of the demand stemming from countries like India and China.

Demand for affordable housing has increased along with a rise in demand for social, transport, and utility infrastructure. Governments across the world have launched various plans to provide affordable housing at lucrative interest rates. Initiatives to provide affordable housing to the middle- and the low-income group is expected to further boost residential development. Also, the limitation of horizontal expansion due to limited availability of land has forced developers to adopt construction practices for high-rise buildings. This, in turn, is likely to fuel the demand for heavy-duty construction equipment over the forecast period.

APAC is likely to dominate the global market over the forecast period. This region is expected to enhance its market share from 39.4% in 2016 to 43.9% by 2025. Currently, APAC is experiencing significant demand for heavy-duty construction equipment, thanks to the rising potential for expansion of the construction sector. 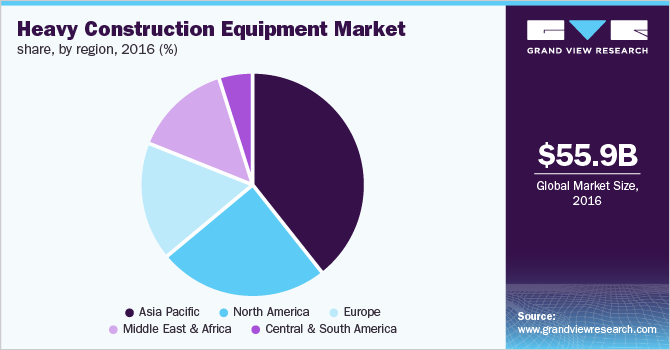 The Chinese government has planned to upgrade the country’s transportation infrastructure through projects such as the national high-speed railway and the 7918 Network (also known as the National Trunk Highway System). As a result, rail infrastructure is expected to be the fastest-growing sector in the country. China has a very distinct market comprising various regions, each with its economic growth trajectory and climate change. Northwest China is expected to grow at the fastest rate due to the government’s “Western Development Strategy” initiative, which is likely to result in sizeable infrastructure spending. 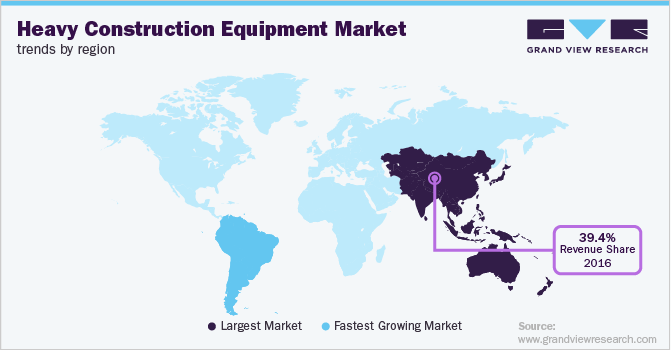 Central and South America are likely to record a high growth rate in the market for heavy-duty construction equipment. This can be largely attributed to investments in the development of roadway infrastructure. For instance, the government of Argentina has planned a major road development project across the country. To be completed by 2025, the project has identified 16 key road plans with a total length of nearly 7,000 kilometers. The total cost of the project is estimated to be around USD 16.7 billion.

Global vendors such as Caterpillar, Komatsu Ltd., and AB Volvo are some of the leading market players. These vendors dominate the market in terms of technology, experience, and quality. Local vendors are forming joint ventures with international players to move up the value chain by acquiring various technologies. For instance, in 2016, India-based SRB Group entered into a joint venture with Russia-based Uralmash Machine-Building Corporation to manufacture heavy-duty construction equipment.

The rise in the prominence of Chinese vendors in the industry has been observed in the last few years. Manufacturers in China have capitalized on government-funded infrastructure projects and are continuously evolving by acquiring European vendors. For instance, Liugong Machinery Co. Ltd., a leading manufacturer of wheeled loaders in China, acquired bulldozer manufacturer Dressta in 2012. Manufacturers in China are growing at an exponential rate and investing in the expansion of their facilities.

Some of the key manufacturers include:

This report forecasts revenue growth and provides an analysis of the latest industry trends in each of the sub-segments from 2014 to 2025. For this report, Grand View Research has segmented the global heavy construction equipment market report based on product, application, and region: 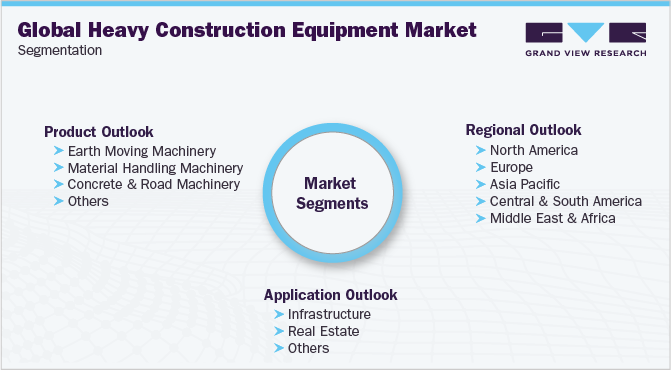