The global helicobacter pylori diagnostics market size was estimated at USD 476.2 million in 2018 and is anticipated to expand at a CAGR of 6.0% over the forecast period. Increasing demand for personalized antibiotic therapy and improved cost-effectiveness of diagnosis of helicobacter pylori infection are some of the factors driving the growth.

Helicobacter pylori (H. pylori) is an aerobic gram-negative bacteria generally found in the stomach. While it balances the stomach ecology, it can also cause infections to the inner stomach lining. The bacteria can act as one of the causative agents for stomach cancer, duodenal ulcers, gastritis, infection in the small intestine, and gastric ulcers. This has led to an increased demand for diagnostic methods for H. pylori infection. The patients are subject to antibiotic therapy for 10 to 14 days, in case of a positive diagnosis of ulcers caused by Helicobacter pylori. 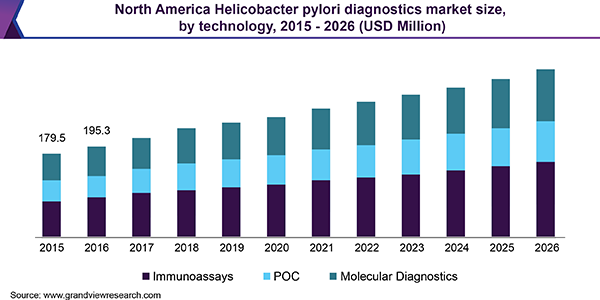 Helicobacter pylori was categorized as a carcinogen in 1994 by the International Agency for Research on Cancer. Although the exact mode of transmission of H. pylori is uncertain, it is suggested that the bacteria infect one individual from another individual through the fecal-oral route. Majority of the patients with H. pylori infection do not demonstrate any specific symptoms, while most of the cases occur in childhood.

Helicobacter pylori infections are particularly prevalent in developing nations. Some of the key factors including the lack of proper water supply, poor sanitation, dense population, and poor personal hygiene can be attributed to the spread of these infections. Rising awareness regarding H. pylori infections in the cohort is one of the factors propelling growth of the Helicobacter pylori diagnostics market.

Easy accessibility and affordability of antibiotics along with short treatment durations will further boost the adoption antibiotics as well as the demand for pre and post monitoring tests. Furthermore, rising incidence of H. pylori infections, need for early detection of symptoms, and technological advancements in the diagnostic techniques are some of the factors driving the market growth.

Immunoassay segment held the largest market share in 2018 and is anticipated to lead the market throughout the forecast period. Several advanced technologies such as the enzyme immunoassays are used for the detection of antibodies. Some of the indirect tests include urea breath tests, serology, and rapid urease tests. Although POC tests are also some of the most commonly used techniques, molecular diagnostics held the second largest market share in 2018. However, molecular diagnostics such as PCR generally offer minimal improvements when carried out through biopsy material. Nevertheless, these tests are particularly beneficial for precise identification of H. pylori in areas outside the stomach where cultures frequently fail.

The hospitals segment accounted for the largest market share in 2018 due to ease of disease presentation, accessibility of doctors, and the rising prevalence of diseases such as duodenal ulcers, stomach cancer, gastritis and gastric ulcers, and infections to small intestine. 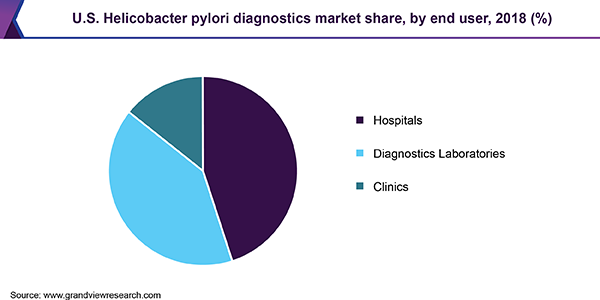 The diagnostic laboratories segment is expected to demonstrate the fastest CAGR during the forecast period. More specialized and efficient infection detection along with rising awareness regarding infectious diseases are the key factors responsible for the favorable growth. In terms of revenue, thehospitals and diagnostics laboratories segments collectively accounted for more than 80% of the market share in 2018.

North America dominated the market in 2018 due to development of healthcare infrastructure and a better economy. However, Asia Pacific is expected to register the fastest CAGR during the forecast period primarily due to a high rate of population growth and increasing prevalence of H. pylori infections.

High prevalence of infectious diseases is a major concern in the Asia Pacific region, which is driving the regional demand for helicobacter pylori diagnostics. Poor sanitary conditions and healthcare infrastructure in countries such as India is projected to further fuel the adoption of these tests. Furthermore, new product launches and establishment of new manufacturing units by the key market players is projected to significantly drive the regional market in the forthcoming years.

Although the global market is moderately concentrated due to the presence of numerous multinational as well as local players, it is highly competitive in nature as it is in its growing stage. The key market players include Thermo Fisher Scientific, Biohit, Quest Diagnostics, Meridian Bioscience, Bio-Rad Laboratories, Alpha Laboratories, F. Hoffmann-La Roche, Coris BioConcept, Certest Biotec, and Epitope Diagnostics.

Thermo Fisher Scientific, Bio-Rad Laboratories, and Quest Diagnostics held the largest market share in 2018 due to their broad product portfolio and extensive geographical presence. Additionally, these companies are adopting various strategies such as new product development, mergers and acquisitions, strategic partnerships, and regional expansions to gain a competitive advantage.

This report forecasts revenue growth at global, regional, and country levels, and provides an analysis of the latest industry trends in each of the sub-segments from 2015 to 2026. For the purpose of this study, Grand View Research has segmented the global Helicobacter pylori diagnostics market report size on the basis of technology, end-user, and region: