The global histology and cytology market size was valued at USD 14.1 billion in 2020 and is expected to expand at a compound annual growth rate (CAGR) of 13.1% from 2021 to 2028. The market is collectively driven by extending applications of digital pathology, an increase in the adoption of liquid-based cytology, and advancements in the form of virtual microscopy. 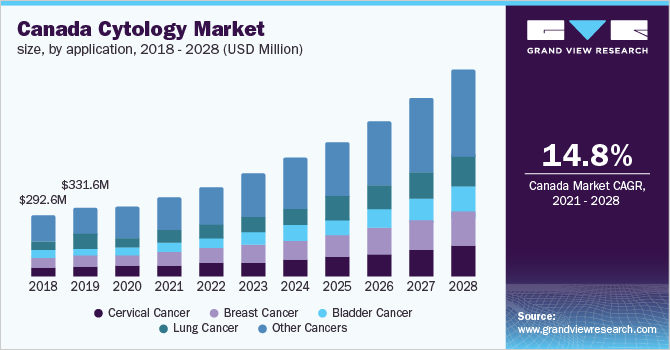 The integration of digital solutions to cytology offers the advantage of the rapid interpretation of primary diagnostic data. In addition, companies are launching new and advanced digital cytology systems for assisting in the rapid on-site evaluation of cytology samples. For instance, in January 2020, OptraSCAN introduced a Digital Cytology Imaging solution for analyzing the cytology slides through their next-generation smart scanner - OS-SiA. The system is based on AI and ML technologies, which facilitates reducing the examination time for assessing a large number of samples.

The rise in the popularity of immunohistochemistry for visualizing cellular components to diagnose a wide range of diseases such as cancers and other infectious diseases is contributing to the growth of the market for histology and cytology. Several companies are developing innovative immunohistochemistry instruments and reagents. For instance, in January 2021, Biocare Medical, LLC released ONCORE Pro, a completely automated staining platform for Immunohistochemistry (IHC) and In Situ Hybridization (ISH) applications.

The In Vitro Diagnostic (IVD) labeled system will enable the diagnostic laboratories to maximize their sample throughput processing with an ideal turn-around time. COVID-19 pandemic is acting as a positive catalyst for the growth of the market for histology and cytology. The strategic collaboration is being observed between companies for developing antibodies specific for validation with immunohistochemistry. For instance, in September 2020, GeneTex, Inc. entered in a partnership with HistoWiz, Inc., for establishing various validated antibodies for immunohistochemistry in human COVID-19 infected tissues.

The companies will also put collaborative efforts into developing automated immunohistochemistry assays with GeneTex for detecting SARS-CoV-2 viral infection in different types of tissues. They also emphasized that IHC helps in the identification of the virus replication by detection of viral proteins in infected tissues, unlike RT-PCR that only amplifies viral RNA fragments in the sample specimen.

The cytology segment dominated the market for histology and cytology and held the largest revenue share of 67.8% in 2020 and is expected to continue the trend during the forecast period. The integration of Artificial Intelligence (AI) for developing advanced cytology systems can be attributed to segment growth. For instance, in November 2020, Hologic, Inc. launched CE marked received Genius Digital Diagnostics System that combines artificial intelligence (AI) algorithm for offering digital imaging solutions to pathologists and cytotechnologists.

The system consists of an AI algorithm for efficient analysis of images, a digital imager system that helps in image acquisition, an image management server, and a reviewing station for a case review. Cervical cancer accounted for the largest share of 36.4% of the cytology segment revenue in 2020. According to WHO, the annual number of cervical cancer new cases is expected to rise from around 570,000 to 700,000 from 2018 to 2030.

Low- and middle-income countries particularly create a favorable environment for the emerging industry participants keen on establishing market presence; this is attributed to a comparatively high incidence of cancer. Hence, for reducing the mortality rate effective screening methods and early detection of Human Papillomavirus (HPV) are essential.

The WHO has recommended Papanicolaou cytology (Pap smear) for cervical cytology screening as it has the ability to detect precursor lesions of cervical cancer at low cost, with flexibility, and at high rates. Hence, an increase in the employment of innovative cytology solutions in cervical cancer screening is set to contribute to the growth of the market for histology and cytology.

Advanced histology technologies have improved the workflow by speeding up the diagnostic capabilities of clinical laboratories. Moreover, companies are focusing on integrating AI platforms in histology. For instance, in September 2020, Cernostics in collaboration with Deciphex evaluated the use of AI technology-based image analysis tools for facilitating early detection of cancer in patients with Barrett's esophagus.

In addition, companies are developing cost-effective kits and reagents, further driving the market for histology and cytology. For instance, in August 2020, Biocare Medical LLC in collaboration with Bethyl Laboratories released the TIGIT [BLR047F] antibody, a new rabbit monoclonal antibody, for qualitative identification of the TIGIT protein by using Immunohistochemistry (IHC). The antibody will be a cost-effective immunohistochemistry solution for pharmaceutical and biotech research institutions.

Instruments and analysis software system is expected to grow through 2021 to 2028 owing to increasing application of technologically advanced instruments such as multimodal nonlinear microscopy, photoacoustic microscopy and stimulated Raman spectroscopy for histopathology. However, the significant infrastructure costs, along with technical and practical limitations in the pathology industry have affected the adoption of such large-scale digital transformative solutions. Hence, the reduction in the cost of the digitization process will improve the rate of digital adoption in pathology.

The drug discovery and designing segment dominated the market for histology and cytology and accounted for the largest revenue share of 44.9% in 2020. The segment is expected to continue its dominance over the forecast period. The growth in the segment can be attributed to the wide use of histomorphometry and IHC staining in pharmaceutical and biotechnology companies for drug development. The image analysis is applied across several steps of drug discovery and development such as drug efficacy and safety studies, target validation, drug repositioning, patient stratification, and biomarker expression studies. 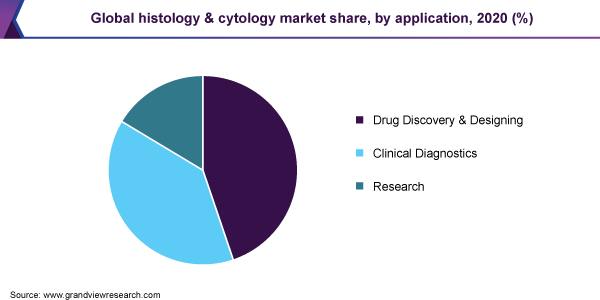 The clinical diagnostics segment is expected to witness a CAGR of 12.6% over the forecast period owing to the increasing application of histopathology studies for the diagnosis of different types of cancer. The cells and tissues are removed from suspicious lump sites for identifying abnormalities and malignancy. They are widely used for screening various types of cancers such as breast, bowel, and cervical cancer.

North America dominated the histology and cytology market and accounted for the largest revenue share of 41.4% in 2020. This growth in the region can be attributed to several factors such as high incidence of cancer, extensive R&D activities, presence of key players, and established research infrastructure for pathology services. In addition, the high rate of product approval and commercialization in the region is further contributing to the growth of the market for histology and cytology.

In the Asia Pacific, the market for histology and cytology is expected to witness the fastest growth rate of 14.5% from 2021 to 2028. The growth in the region is due to several factors such as rising cancer awareness, a large target population, and improving healthcare infrastructure. In addition, researchers are increasingly evaluating new cytology which is further fueling the growth of the market for histology and cytology in the region.

Rapid introduction and approvals attained by different cancer screening pathology solutions have been witnessed in recent years. For instance, in September 2020, Roche received U.S. FDA approval for the expanded use of CINtec PLUS Cytology for cervical cancer screening. This expanded indication for the system gives laboratories to deliver accurate & reliable results for HPV infections.

The biomarker information will help in the detection of a woman’s risk of developing cervical cancer. The company offers a vast portfolio of products for cancer testing and automated testing platforms for cervical cancer. Some of the prominent players in the histology and cytology market include:

This report forecasts revenue growth at global, regional, and country levels and provides an analysis of the latest industry trends in each of the sub-segments from 2017 to 2028. For the purpose of this report, Grand View Research has segmented the global histology and cytology market report on the basis of type of examination, product, application, and region:

How big is the histology and cytology market?

What is the histology and cytology market growth?

Which type of examination led the histology and cytology market?

b. The cytology segment dominated the global histology & cytology market and held the largest revenue share of 67.8% in 2020.

Which product segment dominated the histology and cytology market?

b. The consumables and reagents segment dominated the global histology & cytology market and held the largest revenue share of 58.9% in 2020.

Which application held the largest share in the histology and cytology market?

b. The drug discovery and designing segment dominated the global histology & cytology market and accounted for the largest revenue share of 44.9% in 2020.

Which region accounted for the largest histology and cytology market share?

b. North America dominated the histology & cytology market with a share of 41.38% in 2020. The U.S. exhibits a large pool of local manufacturers offering a vast portfolio of reagents developed specifically for cytology and histology applications, contributing to the dominance of this region.

Who are the key players in the histology and cytology market?

What are the factors driving the histology and cytology market?

b. Key factors that are driving the histology & cytology market growth include rapid advancements in microscopy & immunohistochemistry, the advent of liquid-based cytology, and the increasing demand for virtual microscopy.