The global Hunter syndrome treatment market size was valued at USD 864.9 million in 2018 and is expected to witness attractive growth over the forecast period. Introduction of novel therapies, robust product pipeline, rising government initiatives, and increasing awareness regarding Hunter syndrome and its available therapeutic options are expected to significantly fuel the market growth over the forecast period. 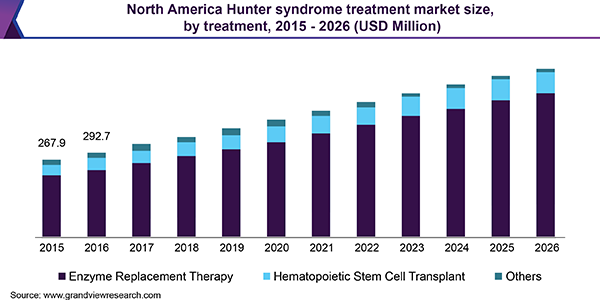 According to the data published by the National Institute of Health (NIH) in 2018, Hunter syndrome affects around 1 in 160,000 males globally. The risk of developing this disease is far less among women because they inherit two X chromosomes and one of them can provide a functioning gene if the other X chromosome is defective. However, in men, there is no other X chromosome to compensate for the defective one.

Expected approval of novel therapies in late-phase clinical trials and increasing R&D activities by key players for the development of such novel therapies are anticipated to be two major factors driving the market growth in the near future. For instance, in June 2019, Denali Therapeutics Inc. received FDA’s Orphan Drug Designation (“ODD”) and Rare Pediatric Disease Designation for its pipeline drug candidate DNL310, which is being evaluated for the treatment of the disease.

Initiatives undertaken by various organizations for creating awareness regarding the disease diagnosis and its treatment is expected to support market growth over the forecast timeframe. For instance, in May 2018, Shire Plc. in collaboration with the National MPS Society and International MPS Network launched its third #FlyforMPS digital campaign aimed to increase awareness about.

Based on treatment type, the market is categorized into enzyme replacement therapy (ERT), hematopoietic stem cell transplant (HSCT), and others. In 2018, the ERT segment accounted for the largest market share and is anticipated to hold onto its dominance over the forecast period. This is attributed to improved sales of Shire Plc’s ELAPRASE and potential for worldwide approval of GC Pharma’s product called Hunterase. 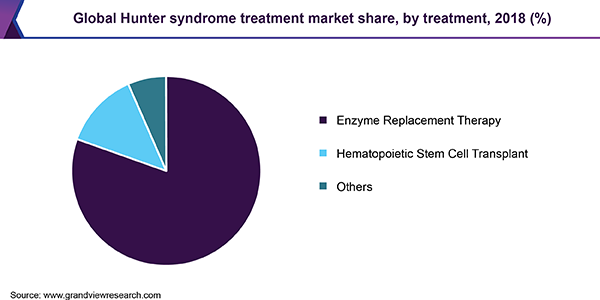 Shire Plc’s Elaprase (idursulfase) is the single major drug used for the treatment of Hunter syndrome, with GC Pharma’s Hunterase (idursulfase beta) being approved only in South Korea as of now. These drugs have addressed a significant unmet need. However, the high cost of these drugs is expected to be a major factor hindering their market growth. For instance, Idursulfase (Elaprase) drug costs around USD 3,100 per 6mg/3ml vial.

In 2018, North America dominated the market owing to favorable regulations for orphan drug development, rising awareness among people concerning rare diseases, increased funding for research activities and improved healthcare facilities. Furthermore, the favorable reimbursement policies for expensive drugs such as ELAPRASE in the U.S. have supported its adoption and fueled the regional growth.

Asia Pacific region is projected to exhibit a lucrative growth rate over the forecast period. Japan, China, and India are expected to emerge as potential countries for growth, owing to their high unmet needs in the market. Major players are focused on gaining approval for their novel therapies and are penetrating these markets to attain a major share. For instance, in July 2019, CANbridge Pharmaceuticals Inc. filed a New Drug Application (NDA) with the National Medical Products Administration (NMPA) for its novel treatment drug called Hunterase in China. Hunterase (idursulfase beta) is a patented therapy of GC Pharma indicated for the treatment of Hunter syndrome.

Currently, Shire Plc. (acquired by Takeda Pharmaceutical Company Limited in April 2019) is a prominent market player, with strong sales of its drug ELAPRASE, indicated for the treatment of Hunter syndrome. However, Shire plc is expected to face stiff competition from Green Cross (GC) Pharma over the forecast period. GC Pharma is emerging as a global player in the Hunter syndrome treatment market with its orphan drug, Hunterase.

GC Pharma is undertaking inorganic growth strategies such as partnerships and collaborations for the commercialization and geographical expansion of Hunterase. For instance, in April 2019, Clinigen Group plc and GC Pharma entered into an exclusive licensing agreement under which Clinigen gained the rights to commercialize Hunterase in Japan.

This report forecasts revenue growth at global, regional, and country levels and provides an analysis of the latest trends and opportunities in each of the sub-segments from 2015 to 2026. For the purpose of this study, Grand View Research has segmented the global Hunter syndrome treatment market report on the basis of treatment and region: