The global hyperbaric oxygen therapy devices market size was estimated at USD 2.21 billion in 2016. The introduction of hyperbaric oxygen therapy (HBOT) technique enhances the effectiveness of leukocytes, especially in the wound site, and hinders the toxic effect of carbon monoxide (CO) and cyanide. Growing acceptance of this technology globally is one of the key factors expected to boost the market during the forecast period.

The growing investment by private players such as OxyHealth and SOS Group Global Ltd. to develop technologically advanced HBOT systems is also among the few factors anticipated to propel growth. The development of portable HBOT systems and growing number of clinical trials that are sponsored by various universities & players indicate ongoing advancement and are contributing to growth of the market. The presence of technology assessment organizations, such as Cochrane Collaboration, Alberta Heritage Foundation for Medical Research, and Agency for Healthcare Research & Quality (AHRQ), that review evidence backing the use of hyperbaric oxygen for various conditions is also one of the factors indicating the ongoing R&D activities in this field. Technological advancement in the field of hyperbaric oxygen therapy devices is anticipated to drive the demand over the coming few years.

The growing usage of hyperbaric oxygen therapy in wound healing and cosmetic procedures is one of the factors anticipated to boost the demand over the coming few years. An increasing number of athletes resulting in surge in demand for this technology. However, the rift between FDA-approved uses and off-level uses is one of the factors that is impacting the growth negatively. Currently, the FDA has approved use of these devices for thirteen conditions, such as gas embolism, carbon monoxide poisoning, diabetic foot ulcers, decompression sickness, necrotizing infections, and wound healing.

Some of the other uses of this device that have not been cleared by the U.S. FDA are stroke, Parkinson's disease, multiple sclerosis, depression, Alzheimer's disease, AIDS/HIV, and others. Both approved and unapproved uses are extensive and include a similar number of physiological and neurological conditions. In spite of the abovementioned restraining factor, HBOT continues to witness a surge in its adoption rate in hospitals and clinics. Based on a research paper, nearly 90% (1,800 out of 2,000) hospitals and 71% (500 out of 700) clinics are now offering hyperbaric oxygen therapies, due to its noninvasive nature. This is expected to further impel the growth over the coming few years.

Monoplace HBOT devices emerged as the leading product category and accounted for over 76% of the total revenue in 2016. The commercial availability of monoplace systems and the high adoption of such devices, due to ease of handling and less requirement of hospital gas supply are some of the key factors that can be accounted for its revenue share in 2016. The market is majorly dominated by few products such as BARA-MEDXD, BARA-MED, BARA-MED Select by ETC Hyperbaric Chambers (Environmental Tectonics Corporation); PAH-S1 Hyperbaric Chamber & PAH-S1-3800 Hyperbaric Chamber by Pan-America Hyperbarics, Inc.

Moreover, the monoplace HBOT devices segment is anticipated to exhibit the highest growth rate. The growing demand for monoplace systems in hospitals & clinics due to its higher availability in the market and ease in installation is also one of the pivotal factors, which is expected to further drive the market. The technological advancement related to monoplace systems such as portability and some other features such as user-friendly operability and low maintenance costs are a few of the factors that are expected to propel the HBOT Equipment market growth over the coming few years.

In addition, these devices can accommodate huge number of patients with various conditions and also facilitate monitoring by medical staff for every patient’s signs and symptoms. Thus, the overall cost of the services for patients is low as compared to monoplace devices, which also raises the adoption rate of such devices. One of the key Unique Selling Propositions (USPs) of multiplace chambers is that they allow extended patient treatment time. The increasing awareness among the hospital professionals regarding the benefits of this system is anticipated to boost the HBOT Equipment market.

Within application segments, wound healing was the largest segment in 2016 owing to the growing global prevalence of chronic & acute wounds and wound site infection. In the U.S., chronic wounds affect approximately 6.5 million patients and they spend over USD 25.00 billion annually for the treatment of chronic wounds. The rising healthcare costs, increasing prevalence of obesity & diabetes, and growing aging population are some of the key factors that result in surging demand for treatment of chronic and acute wounds. These factors can be accounted for majority of the revenue share held by the wound healing segment. 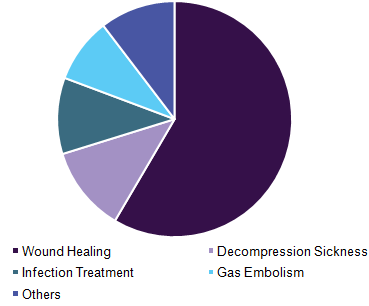 According to the estimates reported in the NCBI, about 1 to 2% of the total population of developed nations will experience a chronic wound in their lifetime. In emerging economies, the share is expected to be higher. Moreover, the rising threat of chronic wounds due to increasing prevalence of diabetes and obesity is also among some of the contributing factors.

The increasing popularity of adventure activities and leisure sports amongst majority of the global population is also responsible for driving the need for HBOT systems in wound healing applications. In addition, the commercially available products such as BARA-MEDXD, BARA-MED, BARA-MED Select, BARA-PRESS Software Control System, and PAH-S1 Hyperbaric Chamber are majorly used for wound healing and decompression sickness. The presence of such a huge product portfolio for the treatment of chronic wounds is also among few factors that can be accounted for the largest market share.

However, the others segment witnessed the highest growth rate with a CAGR of 8.2% from 2017 to 2025. The increasing number of clinical trials with hyperbaric oxygen therapy equipment for conditions such as periodontitis, diabetes mellitus, aging, hypoxic-ischemic encephalopathy, and diabetic foot ulcer outcome is one of the key determinants that indicates the lucrative growth of the other segment. Some of the sponsors of these clinical trials are Loma Linda University and Nanfang Hospital of Southern Medical University.

North America was the leading segment and accounted for around 32% of the total revenue in 2016. Emerging economies such as India, China, Philippines, Vietnam, and Brazil have been experiencing strong economic growth. Increasing population and rising need for wound healing treatment have spurred the demand for HBOT in the region. Growing disposable income has triggered consumers to avail of technologically advanced medical treatment and therapies.

The U.S. was the leading market in 2016 and is also anticipated to hold largest revenue share over the forecast period. According to the American Venous Forum, advanced venous diseases characterized by skin changes and leg ulceration affect over 2.5 million people annually in the U.S. The increasing prevalence of chronic & acute wounds and simultaneously growing treatment rate due to the presence of developed healthcare technology, growing healthcare expenditure by the government, and huge disposable income is some of the factors that are expected to boost the market over the coming years.

However, Asia Pacific is expected to be the fastest growing region over the coming few years. This region is anticipated to deliver enormous growth due to increasing per capita income, growing medical tourism industry, and rising public awareness regarding benefits of HBOT devices. As compared to the growth rate of Japan, China is anticipated to witness faster growth in the Asia Pacific region.

Various other trends that are further expected to propel growth include strategic alliances between some of key players who majorly focus on product expansions and establishment of market in the emerging regions through increased investment. Moreover, geographic expansion activities in developing countries and focus on the introduction of cost-effective medical devices by market players are expected to strengthen the market and establish their position in the global market.

This report forecasts revenue growth at global, regional, & country levels and provides an analysis on the industry trends in each of the sub segments from 2014 to 2025. For the purpose of this study, Grand View Research has segmented the global hyperbaric oxygen therapy devices market on the basis of product, application, and region: