The global ICT investment in government market size was estimated at USD 431.15 billion in 2015. IoT investments are gaining prominence as several regions are making an effort towards transforming into digital economies.

Government agencies are increasingly spending to maintain the current system infrastructure while simultaneously investing in modernization, development, and enhancement projects. The investments have been gaining momentum, which has led the ICT suppliers to budget their annual spending for the development of the digital marketplace. Government agencies are striving to deliver quality services in complex environments by adopting connected platforms for streamlining processes.

Organizations are utilizing the cost-saving opportunities and long-term benefits offered by mobility and cloud technologies. The regional governments are placing their information and communication strategies within their service transformation roadmap to deploy IoT and cloud-based solutions. For instance, the state governments in Australia are taking major steps in driving cloud investments within their overall ICT stack by rolling out cloud-first policies.

Application developers are becoming an integral part of the ICT ecosystem and are working closely with vendors and partner communities for providing solutions to government agencies. Chief Information Officers (CIOs) are focusing on optimizing their businesses, and IT costs while leading digital innovation in the public sector. They are also facing cultural and organizational challenges that are limiting the potentials of data analytics, IoT, cloud, and mobile to drive transformational changes.

The investment in the IT services segment constituted over 20% of the overall government ICT investment in 2015. The growing trends for Software-as-a-Service (SaaS) and Telecommunication-as-a-Service (TaaS) applications are driving the spending in the IT and communication services segments. The increasing need for outsourcing services is expected to positively impact the service investments carried out in the Asia Pacific region.

Moreover, the impact of regulatory issues in the European region is expected to be overshadowed by areas including rationalization of business process automation and digital operations management. This is expected to affect the overall IT outsourcing spending, enabling it to shift to the operating expenditure model from the capital expenditure model.

Increased demand for cost efficiencies and business benefits are driving the growth of the software segment. For instance, software investments in India are gaining momentum due to increased spending carried out for projects including Make In India, Digital India, and Pradhan Mantri Jan Dhan Yojana. Increasing demand for virtualization infrastructure, business analytics, and enterprise application software, such as customer relationship management (CRM) and Enterprise Resource Planning (ERP), is expected to accelerate the spending in software.

Investment in the IoT segment dominated government spending on ICT in 2015. The IoT expenditure in developing regions is expected to accelerate further as governments are building an infrastructure that supports the Internet of Everything (IoE) technology. Similarly, governments in developed regions of Europe and North America are focusing on replacing old infrastructures in the wake of modernization. 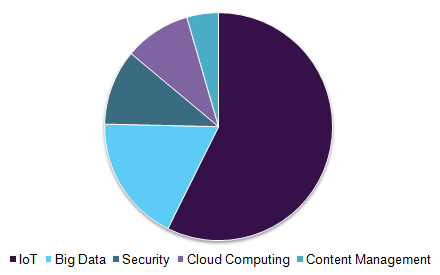 The federal government spends significantly on IoT due to the increased adoption of IoT devices and systems in several sectors. For instance, the Department of Defense (DoD) is the major contributor that spends a substantial amount on IoT-based sensors. Additionally, the National Aeronautics and Space Administration (NASA) utilizes connected networks of devices and sensors to observe earth and space patterns. The Homeland Security Department uses connected networks for U.S. border surveillance.

The big data segment has contributed significantly to the industry growth, thereby garnering an investment share of over 15% in 2015. The spending on big data is expected to grow significantly as the conventional database tools and devices are not capable of handling a large amount of unstructured data. This has given rise to the need for investing in programs that help in developing new technologies and tools to manage the highly complex unstructured data.

North America dominated the overall spending in ICT in 2015. The need for better management of IT assets is expected to propel investments over the next nine years. Additionally, the region saw a slight decline in 2016 as a major portion of the ICT spending was allocated to improve cybersecurity measures. As organizations are continuing to retool their environments with mobility, cloud, IoT, and infrastructure solutions, the need for addressing information security gaps with advanced products and services is gaining prominence in the region.

The Asia Pacific region’s spending accounted for close to 20% of the total ICT investments in 2015. The growing focus on cross-functional initiatives to propel the long-term domestic innovation is expected to boost regional ICT spending. The regional governments are acting as catalysts for local organization internationalization and Foreign Direct Investments (FDI). Large ICT domestic markets such as India and China and leading economies including South Korea and Australia are dominating the regional spending.

The development of the e-Japan strategy has emphasized the growth of local e-governance projects, including citizens’ participation and feedback and self-evaluation of online government services. The government of India has initiated the Smart Cities project, which plans to turn 100 cities into smart cities equipped with facilities including smart water management, smart transportation, and smart energy management.

This report forecasts revenue growths at global, regional, and country levels and provides an analysis of the industry trends in each of the sub-segments from 2014 to 2025. For the purpose of this study, Grand View Research has segmented the global ICT investment in government market study based on solution, technology, and region.