The global image-guided therapy systems market size was valued at USD 2.2 billion in 2020 and is expected to expand at a compound annual growth rate (CAGR) of 6.0% from 2021 to 2028. The rise in the geriatric population and shifting preference for minimally invasive surgeries, along with technological advancements in imaging systems, are the key factors driving the market. The increased burden of chronic diseases, coupled with a rise in the number of initiatives for cancer radiotherapy, is also positively impacting the market growth. The market players are focused on developing remote solutions, such as cloud-based training on virtual machines, amid the COVID crisis to provide remote guidance and support to the patients. In November 2020, Royal Philips partnered with LeQuest to enable healthcare providers to gain online training for the Philips Ultrasound Affiniti system. Postponing non-urgent surgical procedures has negatively impacted image-guided therapy procedures. 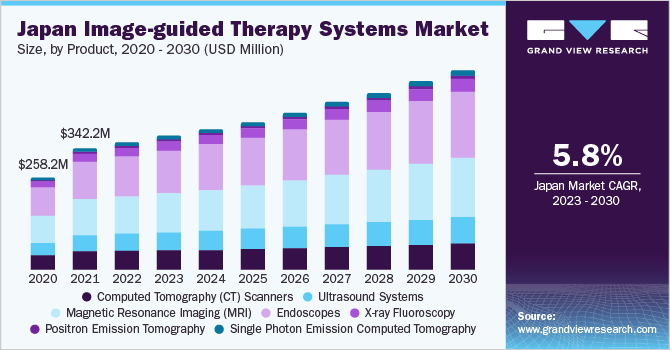 According to the United Nations-World Population Prospects, 2019, about 16% of the global population or one in six people will be aged above 65 by 2050, up from 9% in 2019. According to the WHO, the global cause of death is shifting from infections to chronic conditions, including high cholesterol, hypertension, cancer, and cognitive heart diseases. Thus, the demand for image-guided therapy systems for treating these conditions is expected to rise in the coming years.

According to the Institute of Cancer Research, more than 120,000 people in the U.K. are treated with radiotherapy annually. Image-guided therapy systems have significantly improved, resulting in more precise and safer interventions. An example of such advancements is the launch of a new therapy suite, Nexaris, by Siemens Healthineers. In November 2017, the company launched this system to integrate multimodal imaging in interventional radiology and surgery.

COVID19 impact: Ambulatory surgery centers to boost the market. The segment growth is expected to reach 7.0% from 2021 to 2028

The endoscopes segment accounted for the largest share of 32.2% in 2020. Increased adoption of robot-assisted endoscopic surgeries and the high cost of the systems are the key factors behind its largest revenue share. The high volume of endoscope-guided surgeries for various interventions has also contributed to its expansion. The growing incidences of cancer and gastrointestinal diseases have increased the demand for interventional endoscopic systems, thereby driving the segment.

This segment is also projected to expand at the fastest CAGR during the forecast period owing to technological advancements in endoscopy and subsequent product launches. In November 2017, Apollo Endosurgery received FDA approval for its endoscopic suturing system, OverStitch Sx, for soft tissue approximation and endoscopic placement of sutures.

Magnetic Resonance Imaging (MRI) emerged as the second-largest product segment in 2020. MRI-guided therapy system holds promising growth opportunities. Technological advancements and the wide application range of these therapies in treatment planning, localization and delivery, and treatment response assessment are the key factors responsible for the segment growth. These systems have major applications in areas, such as radiation oncology, neurology, and trauma care. Thus, the rising burden of such diseases is expected to boost product demand further.

The hospital segment accounted for the largest revenue share of 41.1% in 2020. The increased number of various surgeries and high adoption of image-guided therapy systems in hospitals are the primary factors driving the segment. Hospitals are adopting these systems owing to the increasing need for cost-effectively optimizing clinical workflows.

The ambulatory surgery centers (ASCs) segment is anticipated to exhibit the fastest CAGR over the forecast period. This growth is attributed to the advantages offered by these healthcare settings such as reduced waiting time and significant cost savings. High preference for minimally invasive surgeries and reduced hospital stays in the ASCs are also driving the segment. The growing trend of same-day surgery in developed economies due to significant cost savings and optimum care delivery also contributes to the segment growth.

The cardiac surgery segment accounted for the largest share of 32.3% in 2020. Cardiovascular diseases (CVDs) are the leading cause of death globally. The rise in the geriatric population, coupled with the increasing burden of such diseases, is the major factor contributing to the segment growth. Various research initiatives undertaken for the development of real-time cardiac interventions are also positively impacting the segment growth.

The neurosurgery segment is likely to expand at the fastest CAGR of 6.7% over the forecast period. The growing incidences of accidents and trauma cases and the high prevalence of neurological disorders are the major factors driving this segment. Increasing collaborations among key companies for developing new image-guided therapy systems are also fueling the segment growth. 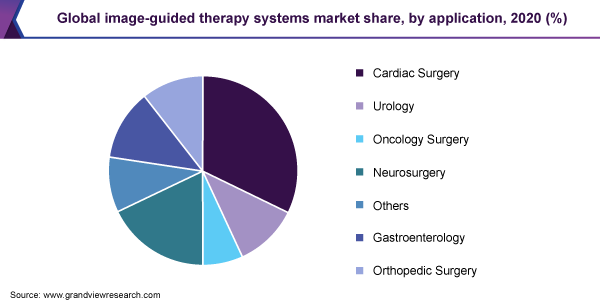 The urology segment accounted for the second-largest revenue share in 2020. Image-guided therapy systems for urological applications are primarily used for diagnosis, treatment planning, and treatment assessment. Increasing research for the development of innovative systems using 3D and 4D imaging, robot-assisted image-guided therapies, and molecular imaging is expected to drive the segment.

North America captured the largest share of 36.3% in 2020 and is expected to maintain its lead over the forecast period. Improved healthcare infrastructure, technological advancements, and quick adoption of advanced radiation therapies are the factors fueling the growth of this market. The growing geriatric population base, coupled with the rising cases of chronic diseases, is also contributing to the regional market growth. The U.S. emerged as the largest market in North America in 2020 and accounted for 86.0% share.

Favorable initiatives undertaken by private companies in the field of minimally invasive interventional and surgical techniques are expected to boost market expansion in the coming years.

Asia Pacific is projected to exhibit the fastest CAGR over the forecast period. The growing geriatric population, increasing cases of target diseases, and improving healthcare infrastructure are the factors responsible for its rapid growth. An increasing number of research centers in countries, such as India and China, are positively affecting the regional market growth.

The market is consolidated with the presence of Koninklijke Philips N.V., Siemens Healthineers, GE Healthcare, and Fujifilm Holdings Corporation accounting for the majority of the market share. Product launches, strategic acquisitions, and innovation are the major strategies adopted by the players to retain their market share.

In December 2020, Royal Philips announced a collaboration with InSightec to develop MR-guided focused ultrasound that would help in non-invasive neurosurgery. In September 2020, Philips announced the launch of its next-generation image-guided therapy platform- Philips Azurion. The platform enables clinicians to handle multiple tasks with the help of a single touch screen. Some prominent players in the global image-guided therapy systems market include:

This report forecasts revenue growth at the global, regional, and country levels as well as provides an analysis of the latest industry trends and opportunities in each of the sub-segments from 2016 to 2028. For the purpose of this study, Grand View Research has segmented the global image-guided therapy systems market report based on product, application, end-use, and region:

How big is the image-guided therapy systems market?

b. The global image-guided therapy systems market size was estimated at USD 2.2 billion in 2020 and is expected to reach USD 3.9 billion in 2021.

What is the image-guided therapy systems market growth?

b. North America dominated the image-guided therapy systems market with a share of 36.5% in 2019. This is attributable to improved healthcare infrastructure, technological advancements, and quick adoption of advanced radiation therapies.

Who are the key players in the image-guided therapy systems market?

What are the factors driving the image-guided therapy systems market?