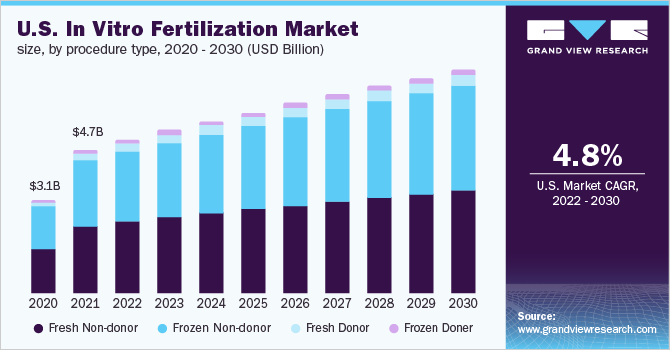 According to the American Society for Reproductive Medicine (ASRM), the inability to have a child affects around 6.7 million women in the U.S, which accounts for around 11.0% of the reproductive population. Moreover, 25% of couples have more than one factor leading to infertility.

Asia Pacific accounted for the largest share in terms of the number of IVF cycles performed in 2019 due to the large target population, low cost of treatment as compared to developed regions, and availability of advanced technology. Japan, China, and India were the major contributors to the region.

In December 2016, the Ontario government announced a USD 50 million fertility program to cover IVF treatment for 5,000 people. Furthermore, the Singapore government offers around 75% co-funding for various ART procedures such as in-vitro fertilization (IVF), gamete intrafallopian transfer (GIFT), and intracytoplasmic sperm injection (ICSI). In January 2015, the Centers for Disease Control and Prevention (CDC) reported that the use of ICSI has increased from 36.4% in 1996 to around 76.2% in 2012.

To increase the success rate of the in-vitro fertilization, researchers have introduced techniques that are used prior to the IVF procedure. Presently, advanced techniques, such as assisted hatching, vitrification, egg/sperm freezing, Percutaneous Epidydimal Sperm Aspiration and Testicular Sperm Extraction (PESA and TESE), mini IVF, three-parent IVF and genetic diagnosis, are used.

The in-vitro fertilization instrument consists of culture media, capital equipment, and IVF disposable devices. In 2019, culture media accounted for the largest revenue share in the IVF market. This can be attributed to high government funding, increase in research activities to improve the culture media, and the ability to preserve sperm without reducing their quality.

With the need for high standards of sterile conditions and strict regulatory mandates, industry players are introducing disposable devices such as needles, slides, and chambers. Hence, the disposable devices segment is likely to grow at the fastest rate in the coming years.

The frozen non-donor segment is likely to witness the fastest growth in the coming years as the procedure can be performed even in complicated cases. For instance, a patient suffering from ovarian hyperstimulation syndrome (OHSS) can opt for this type of IVF procedure. Additionally, benefits like better implantation rates, higher live birth rates, more birth weight, lower miscarriage rates, and lower ectopic pregnancy are expected to increase the demand for the procedure.

The fertility clinics segment held the largest revenue share in the IVF market in 2019 and is likely to dominate throughout the forecast period. With rise in demand for ART treatments, the number of fertility clinics and ART centers are increasing considerably. 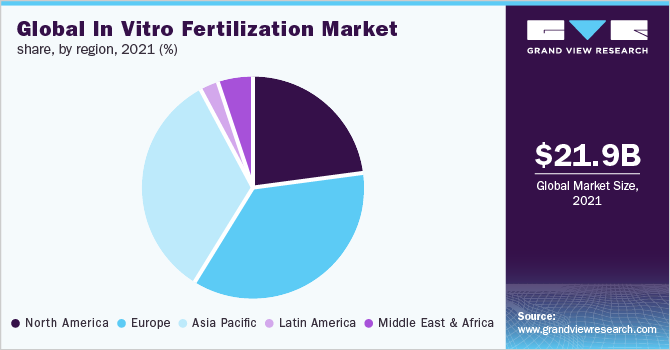 Licensed fertility clinics offer counseling to couples having problems in conceiving. Based on the severity of their problems, doctors and specialists plan out IVF treatments for couples. Fertility clinics are providing state-of-the-art equipment such as micromanipulation, and non-invasive Radio Frequency Identification (RFID) tags, which are further expected to propel the growth of the market for in-vitro fertilization over the forecast period.

In 2019, Europe dominated the market, as it is the first one to come up with the in-vitro fertilization procedure, to remove the title experimental from cryopreservation of eggs, and the first one to legally approve the three parent’s IVF or the mitochondrial transfer technique. Germany, France, and the U.K. are the major contributing countries in the region. In France every year, about 19,000 ART births take place. Furthermore, in July 2015, France legislation allowed legal recognition to surrogate children in order to enable them to have French nationality and enjoy the same rights as other French children.

North America is also expected to witness increasing demand for fertility treatment in the coming years. In April 2016, Reprogenetics published its research, which validated the use of High-Resolution Next Generation Sequencing (HR-NGS) techniques. The company is the largest genetic laboratory in the U.S. that is providing Pre-Implantation Genetic Diagnosis for Aneuploidy (PGD-A). The new test detects the mosaic embryos, which can help in selecting healthy embryo during IVF.

The demand for IVF treatment is expected to boom in the Asia Pacific region due to fertility tourism, increasing foreign investment to penetrate in the economically developing countries and the changing regulatory landscape. In November 2017, Warburg Pincus, a private equity firm, was in the last stage of negotiations to procure minority stake in Indira IVF Hospital Pvt. Ltd., which is one of the leading fertility hospital chains in India.

The market for in-vitro fertilization has a huge opportunity in Japan owing to the introduction of newer techniques such as AUGMENT and defined regulatory framework. In August 2016, OvaScience announced the finalization of its commercial agreement with IVF Japan Group, through which AUGMENT treatment would be made available to women.

The Asia Pacific Initiative on Reproduction (ASPIRE), a task force of clinicians and scientists is involved in the monitoring and management of fertility and Assisted Reproductive Technology (ART). It promotes awareness of ART and infertility and enhances the infertility-related services in the region.

In January 2018, it was announced that Singapore Medical Group (SMG) took the stake in City Fertility Centre or CFC Global, which is one of the leading IVF specialists in Australia. The partnership is expected to increase referrals in Vietnam and other nations due to increasing demand for fertility and women’s health.

Technological advancements are expected to drive the market for in-vitro fertilization in Australia over the forecast period. In March 2018, it was reported that smart TV app is used by the Monash IVF to consult fertility patients in China after the clinic entered into an agreement with AC International Medical Tourism (Melbourne), which targets the market for IVF in China. Monash IVF, a fertility clinic in Melbourne, entered into a partnership with BabySmart, a platform which enables the patients in China to have face to face consultation with the clinicians in Australia.

Development of innovative product and their commercialization, mergers and geographical expansion are the key strategies of the market players operating in in-vitro fertilization. In August 2015, OvaScience announced the results of its first published analysis, comparing AUGMENT fertility treatment with a standard IVF. The results showed a significantly higher rate of selection and transfer of embryos as compared to the standard treatment. In January 2018, NMC Health, a UAE based healthcare provider, acquired a 100% share in Fakih IVF, a major player in the IVF services market.

In April 2019, Vitrolife acquired Virtus Health, an Australian technology company specializing in development of AI-based software for healthcare applications. Vitrolife plans on using AI technology to predict the likelihood of an embryo viable for pregnancy.

In August 2018, Irvine Scientific announced a new agreement with Corning Incorporated, which would provide Irvine Scientific the rights for distribution for Corning’s line of Falcon IVF dishes and plates in the U.S.

This report forecasts revenue growth at global, regional, and country levels and provides an analysis of the latest industry trends in each of the sub-segments from 2016 to 2027. For the purpose of this study, Grand View Research has segmented the global in-vitro fertilization market report based on instrument, procedure type, end use, and region:

How big is the in vitro fertilization market?

What is the in vitro fertilization market growth?

Which segment accounted for the largest in vitro fertilization market share?

Who are the key players in in vitro fertilization market?

What are the factors driving the in vitro fertilization market?

b. Key factors that are driving the market growth include an increase in cases of infertility and development of advanced technologies such as lensless imaging of the sperms.