The global industrial alcohol market size was valued at USD 131.8 billion in 2019 and is expected to grow at a compound annual growth rate (CAGR) of 8.3% from 2020 to 2027. Rising demand for the product as an octane enhancer is projected to remain the key driving factor for the market growth. The overall growth is driven by the individual contribution of various applications in end-use industries, such as pharmaceutical, personal care, transportation, food & beverages, and others. The demand for ethanol, the largest product used in transportation applications as a fuel, is primarily driven by the ethanol mandates made by several countries across the globe. The transportation sector is estimated to be the largest application segment while the personal care segment is estimated to record the fastest CAGR from 2020 to 2207. 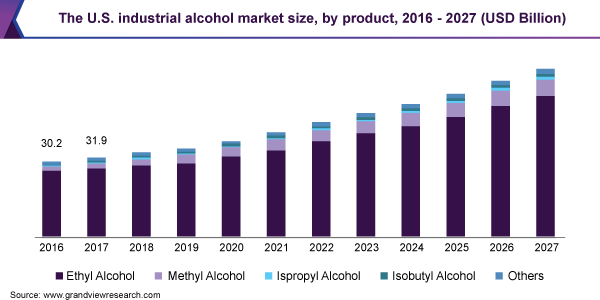 Industrial alcohol is primarily ethanol, which is also known as ethyl alcohol, which is a volatile, colorless, flammable liquid, and a widely used biofuel in the world. It is derived from various sources, such as corn, molasses, and grains. One of the oldest technologies for the production of ethanol is the fermentation of sugarcane. The time of fermentation may vary from 42 to 74 hours. Owing to its low emissions and less intoxicating effects, it can be used in gasoline-operated vehicles as a blend with gasoline. It can be blended with gasoline to any percentage. It is also used as a solvent, fuel, reagent alcohol, and as a food supplement.

Furthermore, the implementation of the Clean Air Act has imposed reduced exhaust gas emissions from conventional gasoline. As cited by the U.S. Environmental Protection Agency, ethanol plays a key role as an additive in reducing fuel emissions and subside engine knocking. Additionally, conventional gasoline formulated by refiners has a high value of octane, which is demanded by the U.S. gasoline sector. As ethanol has a high octane number of 113, it is increasingly utilized by gasoline formulators to enhance engine performance.

Moreover, the market is characterized by the presence of a large number of regional and global players serving various markets and also having a presence in the industrial alcohol market competing to capture the vast potential present across the globe. The primary factor encouraging the new entrants in the vast range of applications of these alcohols as well as ethanol mandates by the governments across various geographies.

The U.S. and Brazil are the dominant countries in the production and trade of ethanol. Globally, the production of ethanol is expected to increase during the outlook period from 2017 to 2025. The usage of ethanol at the global level is driven by the fall in gasoline use and the ethanol mandates in various regions, which stand at 27% in Brazil, 5% in Canada, 10% in the U.S., and 6% in European Union, 3% in Australia, 10% in China and 5% in India.

In terms of volume, ethyl alcohol manufacturing applications dominated the market with a share of more than 50% in 2019. This is attributable to the high demand for the product, which is easily obtained from biomass, corn, wheat, barley, and other sources. It is a renewable fuel and blended with gasoline because of its high octane content. Irrespective of the source, ethanol produced has the same chemical properties and is available in various variants.

The U.S. is the leading producer of corn-based ethanol. About 97% of the gasoline used in the U.S. contains at least 10% of ethanol. The use of ethanol as clean and alternate fuel has gained worldwide acceptance and resulting in ethanol and gasoline blend mandates. Japan and many European countries, particularly the U.K., are the top importers of ethanol from Brazil and the U.S.

Methanol is also known as wood alcohol as it was produced as a byproduct in the destructive distillation of wood. It is most commonly produced using natural gas as the principal source. Methanol is used to produce other chemicals, which are further converted to thousands of products, such as resins, plastics, building materials, paints, foams, polyester, and a wide variety of pharmaceutical and health care products.

Methanol is an organic chemical and also a biodegradable and clean-burning fuel. Methanol is cheaper when compared to other fossil fuels and has a positive impact on the environment. Owing to its economic and environmental advantage, methanol is increasingly used as an alternate fuel for food production, powering vehicles, and marine vessels.

In terms of volume, corn source led the market with a share of over 30% in 2019. This is attributed to the widespread demand for the product as a renewable source for the production of energy. Globally, the growth of the ethanol industry has led to the surge in corn distiller oil, which is used as biodiesel feedstock or as an animal feed. Approximately, 85% of the corn-based ethanol producers have produced corn distillers oil. Ethanol production from corn is also thriving in the byproducts industry.

Furthermore, sugar is largely produced in Brazil and in several countries in the Asia Pacific, such as India and Indonesia. Sugar molasses is used as a biomass source, which is converted into energy in many of the countries across the globe. The fermentation ability of sugar molasses makes them suitable for ethanol production. Globally, sugarcane and its derivatives are the second-largest feedstock used after corn for the production of ethanol. Brazil is estimated to be the largest producer of sugarcane-based ethanol over the forecast period.

In terms of volume, transportation fuels & fuel additives application led the market with a share of 41.2% in 2019. It is projected to continue its dominance over the coming years due to the rapidly growing global automotive sector. The demand for gasoline-operated vehicles has significantly increased in the Europe and the Asia Pacific regions. The use of bioethanol in the existing gasoline vehicles has environmental benefits as it releases lesser toxic materials as compared to other fossil fuels, such as diesel and gasoline derived from fossil fuels. Furthermore, bioethanol also increases the lifespan of the engines. Bioethanol producers have the opportunity to penetrate the product market in the regions owing to the increasing sales of flexible fuel vehicles.

Furthermore, the industrial alcohol used in chemicals offers various benefits, which include health, versatility, and sustainability as it is derived from the natural sources i.e. plants. The rapid growth of the manufacturing sector in the region is expected to propel the demand. A large number of manufacturers are focusing on replacing crude chemicals by bio-derived products, which is expected to propel the demand for industrial in the aforementioned application industries over the projected period. 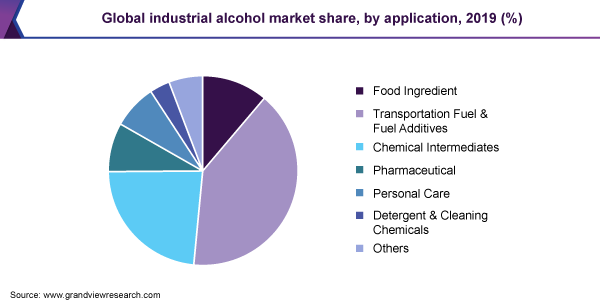 The demand for various products is increasing, as a large number of pharmaceutical companies are collaborating with industrial alcohol providers to source required technical expertise in the production of pharmaceutical products. To meet the rising demand, manufacturers are focusing on increasing their production capacities, which provide attractive opportunities for market growth. Various pharmaceutical applications of the product include tableting, antibiotics, powders, plasma fractionation, and chemical intermediates.

Asia Pacific led the market and accounted for over 35% of the global revenue in 2019. This is attributed to the high consumption and production of methyl alcohol in China and ethanol in India. The demand for ethanol is set to grow significantly in India owing to the initiatives made by the government of India to use ethanol as an automotive fuel. The global methanol industry is dominated by China accounting to the demand for methanol for blending in gasoline and the production of olefins from methanol resulting in new pricing, economic, and market dynamics.

Ethyl alcohol and methyl alcohol dominated the Asia Pacific with the consumption targets set by the governments in China and India. Ethanol usage is low in this region and the growth in fuel consumption is growing rapidly accompanied by increasing concerns regarding air quality, particularly in China and India. With the increase in GDP coupled with a rise in the population, the fuel needed for transportation is set to increase extensively by 2030 demanding more biofuels. China is the world’s fourth-largest producer of biofuels, whereas India has the most favorable conditions for bioethanol demand.

Additionally, the European Commission (EC) announced a 7% cap over food-based biofuels to limit the production of first-generation or conventional biofuels to the most efficient plants. The same is expected to restrain new producers from entering the market. The consumption in the region was more than the quantity produced and the surplus demand was met by importing more than approximately 10% of the quantity produced. Germany, in particular, accounts for the highest share in feedstock production. The low-interest rate on raw materials is expected to lead to an increase in consumption, thereby propelling the overall market growth in the region over the forecast period.

The competitive rivalry among key companies is high as the sector is characterized by the presence of a large number of global players making their entry in the market. However, the government mandates to blend ethanol with gasoline is increasing the demand for fuel-grade ethanol. This is expected to provide lucrative opportunities for biofuel producers. The internal competition can be attributed to the demand for an increase in the proportion of ethanol in the gasoline and ethanol blend mandates, which varies across regions. Global market space is dominated by the key players in the North America region, such as Cargill Inc. Owing to the wide use of ethanol and other industrial alcohols, such as isobutanol and isopropanol, manufacturers in the market compete with the predominant market players by formulating ethanol with various chemicals where the final product can be used in a wide range of industrial, food & beverage, personal care applications. Some of the prominent players in the industrial alcohol market include:

This report forecasts volume and revenue growth at a global, regional, and country levels and provides an analysis of the latest industry trends in each of the sub-segments from 2016 to 2027. For the purpose of this study, Grand View Research has segmented the global industrial alcohol market report on the basis of product, source, application, and region:

How big is the industrial alcohol market?

What is the industrial alcohol market growth?

Which segment accounted for the largest industrial alcohol market share?

b. Asia Pacific dominated the industrial alcohol market with a share of 35.6% in 2019. This is attributable to the utilization of other industrial alcohols such as methanol, isobutanol, and isopropanol in various applications including automobile, personal care, and pharmaceutical applications.

Who are the key players in industrial alcohol market?

What are the factors driving the industrial alcohol market?

b. Key factors that are driving the market growth include the implementation of regulatory changes by different governments across the globe, which mandates the use of ethyl alcohol (ethanol) gasoline blend as fuel.

The recent outbreak of COVID-19 has resulted in a significant increase in the demand for alcohol-based sanitizers and household cleaning products. As per the guidelines issued by the CDC, disinfectants with an alcohol content of over 70% and hand sanitizers with an alcohol content of over 60% are suitable to prevent the viral infection. With relaxation in the FDA guidelines for hand sanitizers, the utilization of alcohol including ethanol and isopropyl alcohol has witnessed a considerable increase in the production of hand sanitizers and disinfectant products. The updated report will account for COVID-19 as a key market contributor.