The global methanol market size was estimated at USD 31.81 billion in 2018 and is projected to accelerate at a CAGR of 2.9% from 2019 to 2025. Increasing consumption of methanol for the production of dimethyl ether and Methyl tert-butyl ether (MTBE), utilized as the alternatives for gasoline, is expected to propel the growth. DME is used as a fuel (diesel) in the passenger vehicle and aerosol propellant and is also blended in Liquefied Natural Gas (LNG).

Methanol is widely used to manufacture biodiesel, which is biodegradable, safe, and produces fewer air pollutants than other fuels. Government initiatives to reduce global carbon footprint is anticipated to augment the market in the future. Methanol is also used as feedstock for the production of chemicals, such as formaldehyde, dimethyl ether, methyl tert-butyl ether, and acetic acid, used for producing foams, solvents, adhesives, plywood subfloors, and windshield washer fluid. 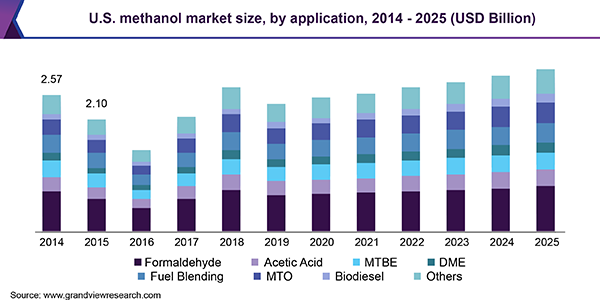 In North America and Europe, over 85% of methanol is produced from natural gas. Natural gas is obtained by drilling shale and other sedimentary rocks under high pressure using hydraulic fracturing technology. The uncertain demand and supply of raw materials coupled with limited alternatives for the product have resulted in significant price changes over the past years.

Methanol is one of the major components for the production of olefins (Methanol-to-Olefins or MTO), such as ethylene and propylene. These olefins are widely utilized for manufacturing synthetic rubber, synthetic plastic, pharmaceuticals, and textile dyes. Some derivatives of ethylene are also used for producing ethylene glycol, vinyl chloride monomer, and vinyl acetate monomer that find application in paints and coatings, adhesives, and other end-use industries. In China, MTO technology has enabled the country to facilitate its plastic manufacturing processes using alternatives, such as natural gas and coal.

Formaldehyde dominated the application segment with 24.3% of the overall volume share in 2018. Formaldehyde resins are used on a large scale to manufacture interior molded components of vehicles to reduce weight and increase fuel efficiency. In the personal care segment, formaldehyde-releasing agents are used as preservatives to eliminate the growth of bacteria or pathogens.

Methanol is widely used for the esterification of acetic acid. The most common production process with regards to acetic acid includes the rhodium-catalyzed carbonylation process. This process involves the reaction of carbon monoxide and methanol. It also facilitates the production of methyl acetate, which is broadly utilized as a solvent forester, cellulose, and nitrates.

Methanol is considered as a feasible alternative to fossil fuel as it is cleaner and less expensive. This factor has led to its increasing consumption in emerging economies, most notably in the Asia Pacific and the Middle East. The countries in these regions principally import methanol for blending with non-renewable fossil fuel. Blending it to petrol increases vehicle acceleration and power and is known to reduce fuel costs. Governments across the emerging economies have been focusing on increasing the blending percentage of methanol in petrol by 3% to 85% depending on the desired vehicle performance and functional efficiency.

The Asia Pacific emerged as the leading regional market in 2018, claiming 61.6% of overall revenue share. China accounted for around 75% of the total methanol production in the region. Northeast Asian countries cumulatively accounted for more than 54% of the global capacity during the same year. China is also the largest consumer of methanol fuel and has numerous provinces developing fuel standards ranging from M5 (95% gasoline and 5% methanol) to M100.

European Union initiation of waste-to-methanol projects starting from 2019, is an attempt to reduce environmental degradation. For instance, the Netherlands has a total capital investment of USD 246 million to convert 360,000 tons of waste into 270 million liters of green methanol. This, in turn, is estimated to drive the growth of the market for methanol in allied European countries. 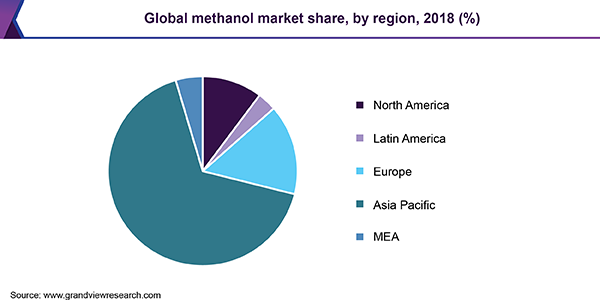 Furthermore, in Central and South American, Brazil is observed to be the key contributor to the consumption of methanol. Brazil is also recognized as one of the key exporters of the product, supported by the presence of key multinationals, such as Group Peixoto de Castro. Approximately 90% of MTBE is typically utilized in the formulation of gasoline as an oxygenate or octane booster. Methyl tert-butyl ether is usually preferred over ethanol due to its ease of transportation as well as enhanced performance in reducing formaldehyde in gasoline. These factors have positively influenced the production of MTBE in the region.

The market participants majorly focus on establishing long term contracts (partnerships) with raw material suppliers. Most manufacturers, being multinational companies, have been investing considerably in R&D activities to develop sustainable production methods. These companies are also setting up methanol manufacturing units in developing countries to capitalize on future opportunities.

This report forecasts revenue growth at global, regional, and country levels and provides an analysis of the latest industry trends in each of the sub-segments from 2014 to 2025. For this study, Grand View Research has segmented the global methanol market report based on application and region: