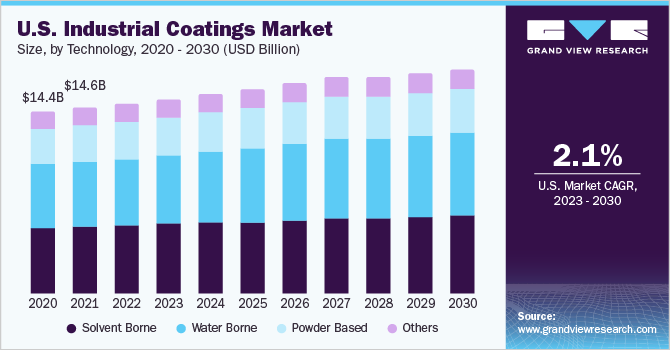 Moreover, the growing need for customized designs and paints in vehicles is likely to support the market growth. The U.S. is a leading manufacturer of aerospace and related components and one of the major aerospace markets in the world. The availability of well-trained aerospace engineers, machinists & other skilled laborers, and increasing air commute are driving investments in the U.S. aerospace industry. The presence of prominent aircraft manufacturers, such as The Boeing Company, Gulfstream Aerospace, and Textron Aviation, Inc., is expected to significantly fuel the growth of the aerospace industry in the country. This, in turn, is anticipated to create ample growth opportunities for the market during the forecast period.

Increasing awareness about vehicle paints protection by healing damages and scratches on vehicle surfaces has boosted the market growth. Moreover, expanding consumer base in the Middle East and the Asia Pacific regions on account of rising disposable income is expected to boost the product demand in the automotive and other end-use industries during the forecast period. Increasing demand for industrial coatings from packaging applications, such as caps & closures, and cans, is projected to positively influence the market growth in the coming years. Excellent CO2 retention properties to preserve freshness and high flexibility & adhesion of industrial coatings are increasing their demand in the packaging industry.

Furthermore, increasing construction activities are driving the demand for industrial coatings in the wood industry. However, environmental and health hazards associated with Volatile Organic Compounds (VOCs) are majorly affecting the market growth. Various environmental and safety regulations, such as The Occupational Safety and Health Administration (OSHA), The Environmental Protection Agency (EPA), and California Air Resource Board (CARB), are being implemented by governments globally to limit the harmful effects of these compounds on human health and environment.

The acrylic segment led the market and accounted for a revenue share of more than 35.0% in 2021. Acrylic industrial coating is widely used in general industries, automotive and auto refinish, aerospace, and other end-use industries owing to its corrosion resistance, good adhesion, barrier & inhibiting ability, and fast-drying properties. New construction and refurbishment, machinery equipment, intermodal containers, and automobiles are some of the applications of acrylic industrial coatings. Alkyd industrial coatings are used in an industrial environment for metal coatings. These coatings have good gloss & color retention and corrosion resistance. They increase the durability of metal, thus, finding application in the coating of various structures, such as oil & gas plants, automotive parts, and marine vessels.

The alkyd industrial coatings segment is expected to witness a significant CAGR during the forecast period. Rising product demand is attributed to its expanding application scope in the automotive, oil & gas, and general industries. Epoxy industrial coatings are widely used in construction, shipbuilding, and wastewater treatment plants owing to their properties, such as resistance to stains, cracking, extreme temperatures, and blistering. The product is used in home appliances, such as refrigerators and washing machines, to protect them from food acids, corrosive gases, and humidity, extend the service life, and improve the aesthetics of the appliances. The demand for epoxy industrial coatings is attributed to their low VOC content and excellent anti-corrosion performance, along with the growing requirement from the aerospace and automotive industries.

The solvent-borne technology segment led the market and accounted for the largest revenue share of more than 36.0% in 2021. Solvent-borne industrial coatings are widely used in general industrial applications and in the oil and gas, marine, automotive, and other sectors. Properties, such as lower drying times and better functionality in open & humid conditions, are expected to fuel the segment growth during the forecast period. Solvent-borne coatings are expected to witness growth in demand in emerging countries, such as China, India, and Brazil, owing to the growth of the industrial sector. However, stringent regulations regarding VOC emissions, particularly in North America and Europe, are expected to challenge the segment growth.

Water-based industrial coatings dry quicker than solvent-based coatings due to the rapid evaporation of water from the coating layer, which results in faster drying without surface skin formation. Water-based industrial coatings are primarily used where solvent-based coatings are expected to react with the substrate. In addition, they are flame-resistant and have low toxicity owing to their low VOC content and low hazardous air pollutant emissions. The use of water-based coatings is projected to increase due to the stringent legislation regarding the solvents present in coatings in the U.S. and several European countries.

Powder-based coatings are more durable and eco-friendlier compared to their counterparts. They have negligible VOC content due to the absence of solvent and thus, they comply efficiently and economically with the environmental protection regulations. Powder-based coatings are widely used in agricultural equipment, automotive, machine components, mechanical parts & building facades, and others to prevent corrosion, abrasion protection, and provide a uniform surface finish. There is a growing demand for zero-emission or low-VOC coatings in the U.S., India, China, and European countries, which is expected to propel the demand for powder-based industrial coatings during the forecast period.

The general industrial end-use segment led the market in 2021 and accounted for the largest share of more than 44.0% of the global revenue. The general industry segment includes the consumption of industrial coatings in coil, packaging, construction, agriculture, and wood applications. Increasing demand for coil coatings from metal roofing, wall panel, HVAC equipment, automotive, appliances, and other applications owing to properties, such as excellent corrosion protection, long-lasting color, and scratch resistance, is anticipated to positively influence the overall market growth during the forecast period. 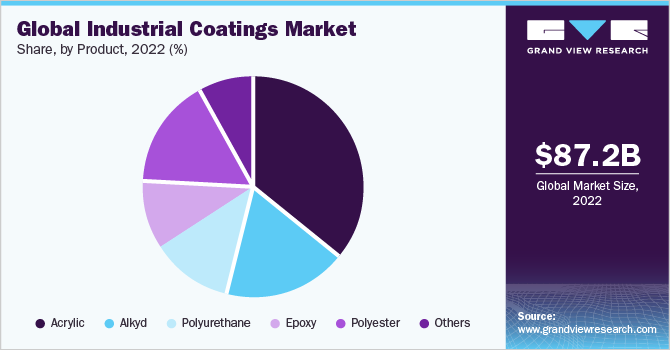 Industrial coating is widely used in various wood applications, such as joinery, kitchen cabinets, furniture, millwork, and musical instruments. It is used in the protection and refinement of wood or wood-made structures. The coating helps increase the product life and enhance the visual cues of the wooden products. Increasing disposable income of consumers and improved living standards in developing economies, such as India and China, are the key factors fueling the demand for modern furniture, which, in turn, is expected to drive the demand for industrial coatings in the wood industry. Industrial coatings are used in the oil & gas industry due to their superior corrosion resistance.

Thus, these coatings find application in water ballast tanks, oil tanks, on the external surface of the hull, general structural steel, and decks for offshore assets. Epoxy industrial coatings are widely used in the aforementioned applications, which can be attributed to their superior resistance to corrosive chemicals. Increasing shale gas production in the U.S. and Canada is also anticipated to drive the oil & gas industry in North America, which, in turn, is estimated to fuel the demand for industrial coatings. The growing investments in shale gas production and rising focus on reducing the dependency on oil imports from other countries are boosting the production of shale gas in the U.S. and Canada.

The Asia Pacific dominated the market in 2021 and accounted for the largest share of over 45.0% of the global revenue. Rapid industrialization and growing product demand from the automotive and vehicle refinish sectors in countries, such as India, Japan, and South Korea, are expected to drive the market during the forecast period. Factors, such as the less stringent laws regarding VOC emissions, in the Asia Pacific compared to Europe and North America and the easy availability of raw materials, are expected to create large-scale opportunities for the use of industrial coatings in various end-use sectors, such as the marine, automotive, vehicle refinish, and general industry.

Low labor cost in the emerging nations of Asia Pacific has attracted many foreign investors to set up their manufacturing facilities in the region. Thus, the growing number of manufacturing facilities is boosting construction activities in the region, which, in turn, is anticipated to propel the demand for industrial coatings during the forecast period. However, the outbreak of COVID-19 negatively impacted the product demand in various applications including general industry, automotive, and electronics owing to the stalled manufacturing activities, restriction in supply & transportation, and economic slowdown across the globe in 2020.

Moreover, the recommencing of industrial operation is projected to positively influence the product demand in the coming years. Europe is the second-largest regional market after the Asia Pacific. The increasing product demand from various end-use industries is expected to drive the regional market during the forecast period. However, the presence of strict governmental regulations regarding VOC emissions in the region owing to rising environmental concerns is projected to impact the growth of solvent-based industrial coatings.

The market is fragmented with the presence of various key players, along with some small- and medium-scale global and regional players. The global players face intense competition from each other as well as from regional players who have well-established supply chain networks and are well aware of the regulations and suppliers in the market. Major players are involved in the expansion of their manufacturing facilities, R&D investments, mergers & acquisitions, and new product development to cater to the increasing global demand, ensure competitive effectiveness, enhance sales & operations planning, and expand customer base. For instance, in November 2019, Akzo Nobel N.V. acquired Mapaero, a French aerospace coatings manufacturer, to strengthen its global position in aerospace coatings. Moreover, in February 2020, the company acquired Industria ChimicaReggiana (ICR) S.p.A., a manufacturer of paints and coatings for automotive refinish and light industrial coatings industries.Some prominent players in the global industrial coatings market include:

This report forecasts revenue growth at global, regional, and country levels and provides an analysis of the latest industry trends in each of the sub-segments from 2019 to 2030. For this study, Grand View Research has segmented the global industrial coatings market report based on product, technology, end-use, and region:

How big is the industrial coatings market?

What is industrial coatings market growth?

Which segment accounted for the largest industrial coatings market share?

b. Acrylic product segment dominated the industrial coating market with a share of 35.4% in 2021. This is attributable to product demand from various end-use industries such as general industries, automotive, oil & gas, and others.

Who are the key players in industrial coatings market?

What are the factors driving the industrial coatings market?

The prevailing pandemic situation has led to weakened demand for paints and coatings in automotive, construction, electronics, and white goods. The path to recovery of growth for the industry is highly dependent on the duration of restrictions imposed and their influence on economic activity across the globe. Contrary to the trend prevalent in the industry in general, certain segments of the market such as antimicrobial coatings are witnessing a surge in demand in healthcare and food industries. The report will account for COVID-19 as a key market contributor.