The global infant formula ingredients market size was estimated at USD 20.4 billion in 2018, and is projected to exhibit a CAGR of 9.6% during the forecast period from 2019 to 2025. The industry growth is majorly driven by the growing number of working women population in middle-class families across various regions including North America, Asia Pacific, and Central and South America. 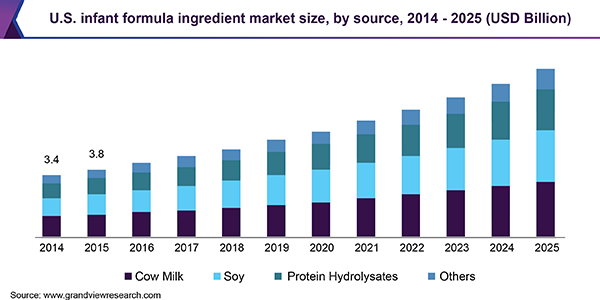 The market incorporates a wide range of products ranging from various baby food products to infant formula. The demand for these products is majorly witnessed in mature markets such as U.S., U.K., and Japan. The industry growth is benefited by growing consumer affluence and increasing working population among women.

Moreover, protein ingredient in infant formula is usually manufactured for bottle-feeding or cup-feeding from powder or liquid solutions. They are solely manufactured for infants owing to their simulation of human milk or their suitability as a complete or partial substitute for human milk. Infant formulations contains protein, carbohydrates, and fat ingredients, which are necessary to provide macronutrients and energy needed by the infant.

Protein as an ingredient segment are available in distinguished forms including powder, ready-to-use formulations, or concentrated liquid, which are then mixed with other liquids such as milk. Various animal protein ingredients including whey or casein proteins are utilized to design infant nutrition products to match the metabolic and intestinal needs of infants.

However, growing usage of plant-based protein such as soy for manufacturing products specifically designed for an infant with hereditary lactase deficiency and galactosemia is expected to benefit the overall market growth over the next few years.

Based on source, the industry is segmented into cow milk, soy, protein hydrolysates, and others. The cow milk-segment find wide scale usage across North America and Europe regions owing to its acceptance as a cost-effective production process, and cow milk-based ingredients that are accessible in bulk. Moreover, most of the infant formula producers use such ingredients, including Mead Johnson and Company, LLC, Abbott Laboratories, and Nestlé S.A.

The protein hydrolysate segment is anticipated to witness the fastest growth over the forecast period. The use of the product in the market to improve the absorption of amino acids and gain optimum nutrient value of protein hydrolysate is expected to have a positive impact on market growth.

Based on ingredient, the market is segmented into oils and fats, carbohydrates, proteins, prebiotics, vitamins, minerals, and others. The probiotics infant formula ingredient segment comes in different forms such as concentrated liquid and powder and can be mixed with other liquids such as milk. The customized product offering is specifically designed to match the metabolic and intestinal needs of infants, which, in turn, is expected to benefit segment growth over the next seven years.

The growing importance of infant formula fortified with nutritional content on account of new product launches by baby food manufacturers including FrieslandCampina and Arla Foods is expected to limit the usage of vitamin ingredients. Furthermore, hazardous effects associated with fluoride owing to toxicity are expected to restrict its demand as an ingredient in infant formulas over the forecast period.

The growing middle class is creating increasing demand for the consumption of probiotic ingredients in the form of infant formula, forcing retailers and convenience store owners to continuously strive to achieve relevance in pricing and product offerings. Much of the growth in retail sector is expected to come from consolidation and mergers and acquisitions from international players.

The infant formula ingredients market is dominated by local players adopting new formats and using multi-channel approaches. In addition, these outlets are also focusing on providing easy payment options by incorporating various technologies in order to provide comfort to their consumers and increase their sales.

Based on application, the market is segmented into standard infant formula, growing-up milk, specialty formula, and follow-on formula. The growing-up milk segment is expected to exhibit the fastest growth over the forecast period. The said application includes vitamin D, iron, and calcium. Growing-up milk application functions as a part of a balanced diet for babies of 12 months and above age group.

During the transition phase from infant nutrition to family food, producers providing infant formula for this specific age group are anticipated to witness high growth prospects. Moreover, sales of growing-up milk application is expected to witness strong gains owing to augmented product awareness, particularly in emerging markets such as Japan.

Sales is anticipated to rise in the emerging markets on account of consumers' hold for novel, convenient, nutrient-rich products, and increasing consumer incomes will boost affordability. Furthermore, the standard infant formula accounted for the largest segment of the market. Besides, high birth rates in emerging countries, standard infant formula acts as a perfectly acceptable substitute for breastfeeding.

On the basis of region, North America accounted for a significant share in the market and is expected to grow considerably over the forecast period. The said region is considered to be an eminent regional market that fulfills its increasing demand. 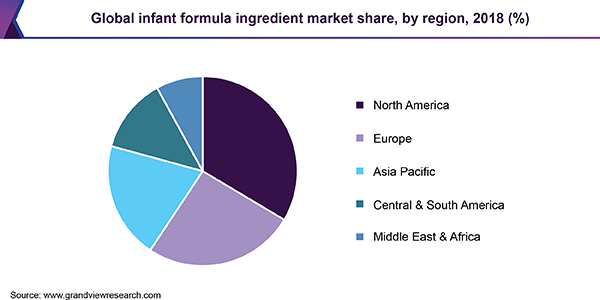 The demand for infant formula is most prominent in regions such as Middle East and Africa and Asia Pacific, is rapidly expanding the retail sector in the country. Increasing exposure to foreign or western lifestyles has been contributing significantly to the market in the Middle East countries such as Saudi Arabia. However, the infant formula segment is yet to realize its full potential in Middle East.

Furthermore, manufacturers are shifting production base from developed countries to countries in the Asia Pacific region particularly Japan and Australia in light of low manufacturing cost coupled with abundant availability of raw materials. This in turn is likely to boost the market growth over the next few years.

Industry is extremely aggressive with companies undertaking some activities including strategic alliances, capital extension, regular mergers, and acquisitions. Major players are concentrating on expanding their share of the total industry coupled with productivity through technological innovation.

This report forecasts revenue growth at global, regional, and country levels and provides an analysis of the latest industry trends in each of the sub-segments from 2014 to 2025. For the purpose of this study, Grand View Research has segmented the global infant formula ingredients market report on the basis of source, ingredient, application, and region: