The global insufflation devices market size was valued at USD 2.31 billion in 2020 and is expected to expand at a compound annual growth rate (CAGR) of 6.3% from 2021 to 2028. The demand for insufflation devices is increasing owing to the technological advancements in surgery, the increasing number of surgical cases, and the rising prevalence of uterine fibroids, obesity, and heart disorders across the globe. The increasing incidence of obesity due to a sedentary lifestyle and an increase in the intake of energy-dense foods that are high in fat and sugar is one of the leading factors contributing to the market growth. For instance, according to the CDC, obesity prevalence in the U.S. has increased from 30.5% in 2000 to 42.4% in 2018. 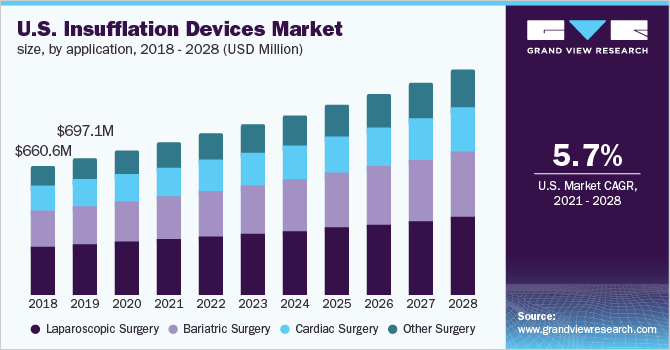 The use of insufflation devices helps to maintain the pneumoperitoneum during bariatric surgery and lower the risk of clinical complications. Furthermore, they help to maintain favorable abdominal pressure conditions, thereby reducing the operating time and the undesirable effects of CO2 pneumoperitoneum. Thus, healthcare professionals prefer to use insufflation devices during laparoscopic, bariatric, cardiac, and other surgeries. These factors are anticipated to propel the market growth over the forecast period. The increasing number of laparoscopic surgeries performed across the globe due to the benefits offered by them is expected to increase the use of insufflation devices. For instance, according to a report published by AHA journals in 2017, more than 2 million laparoscopic surgical procedures are performed per year in the U.S. The overall mortality of laparoscopic surgery is low, ranging from 0.3% to 1.8%, as compared to traditional surgeries. Laparoscopic surgery is frequently utilized in higher-risk patient groups, including the elderly, obese patients, and those with preexisting conditions, including cardiovascular and pulmonary diseases. According to the CDC, around 600,000 hysterectomies are performed every year in the U.S., and around 20 million U.S. women have had a hysterectomy. Such cases are expected to increase the demand for insufflation devices.

The increasing prevalence of obese people having a BMI of 35-39 with specific significant health problems, such as type 2 diabetes, sleep apnea, and high blood pressure, is a high-impact driver for the market as insufflation devices are utilized in bariatric surgery. For instance, according to the American Society for Metabolic and Bariatric Surgery (ASMBS), the number of bariatric surgeries increased from 158,000 in 2011 to 256,000 in 2018. Furthermore, growing awareness about bariatric surgery has increased the demand for insufflation devices as an effective therapy.

The use of insufflation devices in cardiac surgery to reduce postoperative complications, such as cerebral injury, myocardial dysfunction, and dysrhythmias, is expected to drive the market during the forecast period. As per the estimates by the CDC, around 655,000 Americans die from heart disease every year. Cardiac surgery reduces the risk of dying of heart disease, which indirectly amplifies the demand for insufflation devices.

The other surgeries segment is expected to expand at the highest CAGR of 7.1% from the forecast period. The increasing number of surgeries such as carotid artery surgery, cataract surgery, and tonsillectomy is expected to drive the segment. For instance, as per the American Academy of Ophthalmology, around 24.4 million people aged 40 years are affected by cataracts. Furthermore, the increasing prevalence of stroke has led to an increase in carotid artery surgery. According to the AHA journals, The North American Symptomatic Carotid Endarterectomy Trial (NASCET) and the Asymptomatic Carotid Atherosclerosis Study (ACAS) said that carotid artery surgery is better than medical therapy alone, thus fueling the market growth.

The hospitals segment held the largest share of more than 60.0% in 2020. The growth of this segment can be attributed to the upsurge in surgical procedures globally because of a sedentary lifestyle, bad dietary habits, and rising cancer cases, which require the use of insufflation devices. Furthermore, the availability of technologically advanced insufflation devices, such aspersufflator, which is designed mainly for laparoscopy and carbon dioxide laser endoscopic surgery, will further enhance the market growth during the forecast period. In addition, hospital institutions are considered to be the large buyers of insufflation devices having long-term contracts with suppliers, which enhances the negotiating power of suppliers and creates a market for after-sales services. 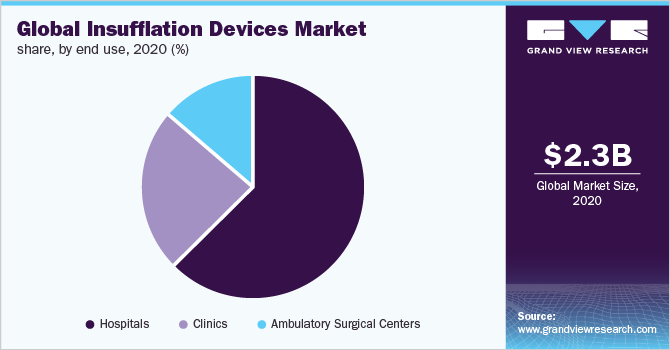 The ambulatory surgical centers segment is anticipated to register the fastest growth rate of 7.4% over the forecast period. An increase in the demand for minimally invasive surgeries, such as laparoscopic surgery, and increasing adoption of technologically advanced medical products by ambulatory surgical centers are a few factors fueling the market growth. Moreover, the cost-effective and speedier treatment, along with high-quality surgery care, might increase the number of outpatients’ admission owing to which the demand for insufflation devices is expected to increase.

North America dominated the market with as hare of over 35.0% in 2020 and is expected to witness considerable growth over the forecast period. The growth of this regional market is attributed to the increase in the prevalence of laparoscopic surgeries, such as hysterectomy and cholecystectomy, and a rise in the demand for minimally invasive procedures. Technological advancements are also contributing to the growth of the market in North America. Therefore, North America is expected to dominate the market over the forecast period.

The Asia Pacific market is anticipated to witness the fastest growth over the forecast period. The increasing prevalence of obesity and heart disorders, along with unmet demand for effective and long-term treatment solutions, is expected to present significant growth opportunities for insufflation devices in this region. Moreover, the rising preference for clinical trials and high R&D investments by global market players owing to their low-cost structure is high-impact rendering drivers for the market in the Asia Pacific region. Rising awareness regarding minimally invasive surgeries and patient compliance with outpatient surgery are expected to fuel the market growth in this region.

Key players are involved in adopting strategies such as mergers & acquisitions, partnerships, and the launch of new technologically advanced products and services to strengthen their foothold in the market. Key players are significantly investing in research and development to manufacture technologically advanced products. Some prominent players in the global insufflation devices market include:

This report forecasts revenue growth at the global, regional, and country levels and provides an analysis of the latest industry trends and opportunities in each of the sub-segments from 2016 to 2028. For the purpose of this study, Grand View Research has segmented the global insufflation devices market report on the basis of application, end use, and region:

How big is the insufflation devices market?

What is the insufflation devices market growth?

Which segment accounted for the largest insufflation devices market share?

b. Hospital segment dominated the global insufflation devices market with a share of 62.78% in 2020. This is attributable to upsurge in surgical procedures globally because of sedentary lifestyle, bad dietary habits, rising cancer cases.

Who are the key players in insufflation devices market?

What are the factors driving the insufflation devices market?

b. Key factors that are driving the market growth include technological advancements in surgery, increasing number of surgical cases, and rising prevalence of uterine fibroids, obesity and heart disorders across the globe are among the major factors driving this marketâ€™s growth.