The global internal combustion engine market size was estimated at 169,603.7 thousand units in 2021 and is projected to register a compound annual growth rate (CAGR) of 9.3% from 2022 to 2030. The market witnessed tremendous growth and is expected to increase owing to a rise in demand for passenger and commercial vehicles in developed and emerging countries. Electric power trains are increasingly being combined with internal combustion engines (ICE) to improve vehicle fuel economy, which is a key factor driving the market's growth. Demand for the product is increasing across the industry such as agriculture, construction, mining, and power generation. The lack of EV infrastructure availability worldwide is also responsible for the uptake of the ICE market. Also, the growing popularity of vehicles using gasoline and growing shale gas production are other factors driving the market growth. 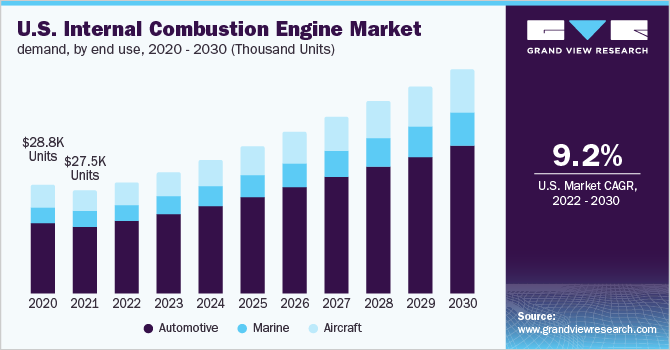 Various strict laws and criteria relating to efficient technologies by the government are expected to boost the ICE market. For instance, the Indian government has made flex-fuel engine manufacturing mandatory for vehicle manufacturers. Thus, prompting manufacturers to increase the manufacturing of ICE. However, the absence of EV infrastructure and charging stations might lead to the industry's rise in the forecast period.

The emergence of COVID-19 had a negative impact on the manufacturing of industrial engines and other equipment. As the virus spread throughout the world, several countries went into lockdown, leading to the closure of the industry. This also led to supply chain disruption of raw materials, and essentials for the engine manufacturing. The engine manufacturer reported a revenue and demand decline throughout the COVID- 19.

From 2020 through mid-2021, the crisis causes disruption. As governments worldwide gradually withdrew different containment measures to stimulate the economy, the energy and power industry started to pick up speed sooner. Internal combustion engines took a lift in the second half of 2021, positively impacting industrial equipment manufacture, including internal combustion engines. On the other hand, the strict government mandates regarding CO2 emissions have provided a solution to the manufacturers and are expected to offer lucrative opportunity for worldwide market advancement during the forecast period.

IC engines have traditionally gained traction throughout many years. Although, the increasing price of crude oil, stringent emission norms, fuel supply security, and noise pollution have compelled OEM to shift their focus toward natural gas and hydrogen-based engines. For instance, In April 2021, Toyota announced that it is developing a hydrogen-fueled combustion engine that will be used in sports vehicles and seeks to create a thriving and sustainable mobility society.

Technological advancements bring evolution to the internal combustion engine, allowing them to provide more power while using less fuel. Meanwhile, engines will continue to play an essential role in the automotive industry's evolution. Also, they have the potential to improve in areas like thermal efficiency, emissions, and electrification. The introduction of the new concept of Low-temperature combustion (LTC) is a cutting-edge combustion idea for internal combustion engines that has recently gotten a lot of attention.

LTC technology has significant advantages in decreasing nitrogen oxides (NOx) and particulate matter (PM) and reducing specific fuel usage. However, controlling ignition time and heat release rate (HRR) are major obstacles to overcome before LTC technology can be widely adopted in vehicle engines. Internal combustion engines are no longer the only choice for vehicle power trains due to the development of alternative energy and hybrid vehicle technologies. Also, the rising adoption rate of EVs (electric vehicles) and the increasing shortage of fossil fuel reserves resulting in higher petroleum product costs are among the major factors restraining market growth.

Based on end-use type, the ICE market is segmented into automotive, marine, and aircraft. The automotive segment held the highest market share of more than 60.0% in 2021. This expansion is linked to rising consumer disposable income, which has resulted in increased car usage throughout the world. The automotive manufacturers are focused on developing efficient internal combustion engines which provide high returns on the manufacturing investments. Furthermore, technological advancements that increase IC engine fuel economy, emissions, and performance are expected to propel the market's growth during the forecast period.

The aircraft segment is expected to witness a moderate CAGR of around 8.6% throughout the forecast period. This segment is primarily driven by the commercial aviation industry's favorable market dynamics. The application of ICE in aircraft used for tourism, logistics, and defense requires high-performing ICE, which has higher torque. This internal combustion engine application in various industries is expected to encourage market growth. Furthermore, technical developments like multi-fuel capability, which increases fuel mileage, will boost demand for the segment.

Based on fuel type, the ICE market is segmented into petroleum and natural gas. The petroleum segment dominates the market with the highest market share of more than 80.0% in 2021, due to the advantages offered by the petroleum internal combustion engine, such as less vibration and noise. Moreover, technological advancement in the automotive industry is expected to increase revenue flow for the segment. This growth can be attributed to the benefits offered by gasoline engines, such as they are efficient, cheaper, lightweight, and reducing emissions. 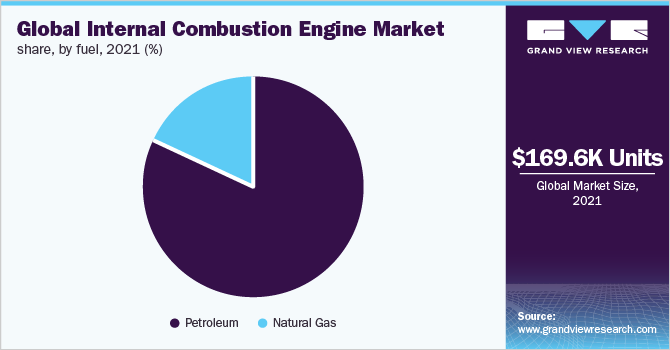 Although abundant availability and cost advantages, the natural gas segment has a lower market share. In comparison to petroleum, the fuel type will take years to gain broad adoption because diesel and gasoline are used in the majority of cars. Meanwhile, natural gas is expected to rise steadily in the foreseeable future as the gas is the cleanest burning-hydrocarbons that produce less emission, helping in reducing carbon emission. Additionally, LNG is used as an alternative to diesel and heavy fuel oil in transport due to its low carbon emission levels.

Asia- Pacific market is anticipated to account for a significant revenue share in the global internal combustion engine market. The presence of several automotive manufacturers, as well as increased demand for the passenger automobiles in some of the region’s major countries, such as India and China, are the primary factors driving growth of the market. Furthermore, the lack of electric vehicle charging infrastructure and the expensive cost of electric motors support market growth. The use of natural gas in ICE due to low emission is also aimed at making ICE an alternative to EV. The aviation industry in the Asia Pacific is also booming, giving the aviation engines segment opportunities to expand during the forecast period. 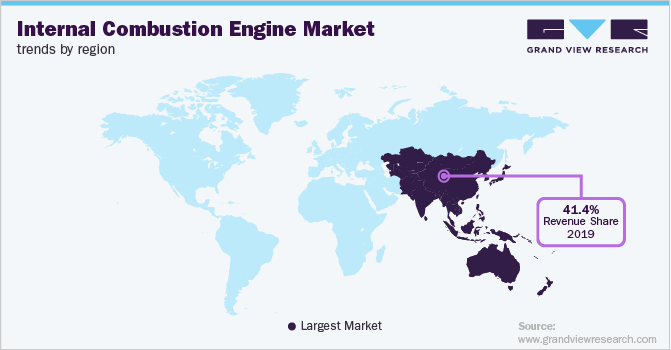 North America is projected for growth in the internal combustion engine (ICE) industry due to the high rate of automobile adoption within the area. North America is a home for the major automobile manufacturers such as General Motors Company and Ford Motor Corporation; the car makers are constantly redefining the design and size of the ICE to make it lightweight and smaller in size and are more efficient in performance. Such technological iterations are making a positive impact on the market growth. Europe is expected to grow in the market for internal combustion engines due to stringent government laws relating to CO2 emissions, as well as an increasing emphasis on the usage of electric cars within the area.

The primary competitive factors of the manufacturing companies include the launch of new products, regional presence, and pricing. For instance, Renault has introduced a new concept SUV with a hydrogen-powered power train. This SUV design includes an internal combustion engine that runs on hydrogen rather than fossil fuels like gasoline and diesel.

These market suppliers have used innovative strategic strategies such as acquisitions, collaborations, and partnerships to gain a competitive edge in the global market sector. For instance, Audi has recently publicized its plans to unveil a final car equipped with an IC engine in 2026. Some of the prominent players in the global internal combustion engine market include:

This report forecasts revenue and Revenue growth at global, regional, and country levels and provides an analysis of the industry trends in each of the sub-segments from 2018 to 2030. For this study, Grand View Research has segmented the global Internal Combustion Engine Market report based on fuel, end-use, and region: 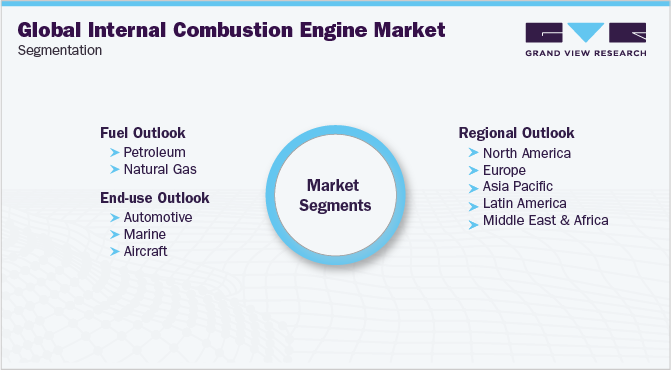 How big is the internal combustion engine market?

What is the internal combustion engine market growth?

b. Automotive segment dominated the internal combustion engine market with a share of 67.9% in 2021. This is attributable to rising consumer disposable income, resulting in increased sales of vehicles worldwide.

Who are the key players in internal combustion engine market?

What are the factors driving the internal combustion engine market?

b. Key factors that are driving the internal combustion engine market growth include the introduction of advanced innovative variants such as low-temperature combustion engines and hybrid engine systems.