The global electric vehicle charging infrastructure market size was valued at USD 19.26 billion in 2021 and is expected to expand at a compound annual growth rate (CAGR) of 30.6% from 2022 to 2030. The rising levels of carbon emissions and other harmful gases stemming from transportation have triggered the necessity of adopting electric vehicles. Hence, the demand for an Electric Vehicle (EV) charging infrastructure in commercial and residential applications is on the rise. Moreover, increasing partnerships among car manufacturers for charging facilities by providing a subscription model is further expected to drive the market growth. 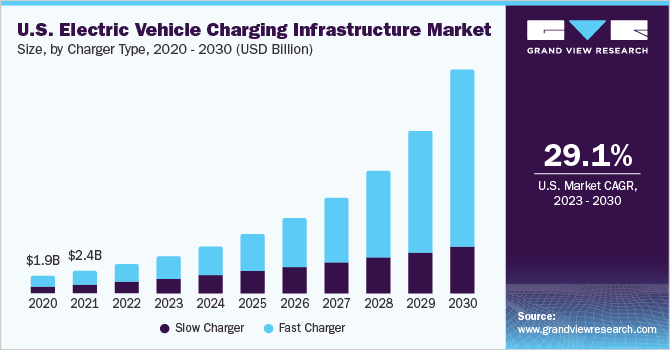 The market penetration of EV charging equipment is significantly high in commercial spaces as compared to residential places. The number of commercial charging stations is predicted to increase in line with the growing adoption of electric vehicles. Efforts toward strengthening the charging infrastructure in commercial spaces would be decisive in encouraging the adoption of EV, as overnight charging at residential complexes or individual homes would not be sufficient for long-distance journeys.

EVCI manufacturers are collaborating with the car rental service to integrate chargers into the existing infrastructure. For instance, In January 2020, Eaton announced its partnership with Green Motion car rental service provider to provide integrated chargers into the building with energy storage. Various automotive manufacturers, such as Volkswagen Group, BMW Group, and General Motors, among others, are investing in the development of Car2X technology for charging infrastructure which is further driving the growth.

Countries such as France, India, the Netherlands, and Canada have introduced several campaigns to boost the adoption of electric vehicles. However, due to the COVID-19 outbreak, the global automobile industry is expected to face a slowdown as several countries across the globe have restricted the production of EVs. This is expected to adversely impact the electric vehicle charging infrastructure market.

As governments across the globe are focusing on emerging from the pandemic with a stronger and more resilient economy, EVs are expected to continue to gain significant attention. For instance, in the U.S., California is emerging with strong electric vehicle targets, which is expected to have a positive impact post-pandemic and boost the growth of the market.

The fast charger segment led the market and accounted for more than 93.0% share of the global revenue in 2021, attributed to the increasing demand for its deployment in commercial stations. Most organizations have deployed Level 1 DC fast chargers or Level 2 AC charging stations that can fully charge an EV within 4-6 hours.

Besides, automotive manufacturers are emphasizing the installation of electric vehicle charging stations for their employees as part of the efforts to raise awareness about their electric cars. For instance, the installation of 100 Level 2 EV charging stations at the parking lots of General Motors Company’s Detroit facility has led to an increase in demand for the company’s Chevrolet Volts electric cars from the employees.

The slow charger segment accounted for a significant share of the market in 2021 owing to the initiatives by various governments for accelerating the deployment of public charging infrastructure, which mostly employs slow chargers. Furthermore, slow chargers are mostly adopted by residential applications which are used for overnight charging.

The CHAdeMO segment dominated the market and accounted for more than a 17% share of the global revenue in 2021. This is primarily due to its compatibility with a majority of electric vehicles (including BMW, GM, and VW, among other models) and the convenience of handling it.

Furthermore, it offers flexibility in designing electric vehicles, as it requires only a single port for recharging; whereas, CHAdeMO connectors require two charging ports due to their incapability to support AC charging. Additionally, the present CHAdeMO connectors are capable of delivering 62.5 kW of DC and are specified by Japan Electric Vehicle Standard (JEVS).

The CCS segment is expected to grow at the highest CAGR over the forecast period owing to increased preference by major automobile manufacturers for the adoption of CCS connectors in their EVs. For instance, in July 2019, Tesla announced the introduction of a CCS connector to support Model 3, with expected near future compatibility with Model S and Model X in Europe.

Furthermore, CCS connectors are available in two types, usually denoted as CCS Type1, and CCS Type 2. CCS Type 1 connectors are extensively utilized in the U.S. while CCS Type 2 are utilized in Europe. Moreover, the support from major auto manufacturers and OEMs, including Daimler AG, Ford Motor Company, General Motor Company, and Volkswagen Group, is expected to drive the demand for the CCS segment over the forecast period.

The commercial segment accounted for a revenue share of 84% in 2021 owing to the initiatives and allocation of funding by the governments and automobile manufacturers for expanding public EVCI infrastructure. The development of supporting infrastructure in public places is necessary as overnight charging or charging at homes would not be sufficient for long-distance travel.

Several public transport agencies are partnering with automotive manufacturers for the installation of charging stations for electric buses which are further driving the growth. For instance, TRAFIKSELSKABET MOVIA signed an agreement with Siemens for the installation of electric bus charging stations with a top-down pantograph for electric buses operated by 45 municipalities, including the City of Copenhagen and Region Zealand. 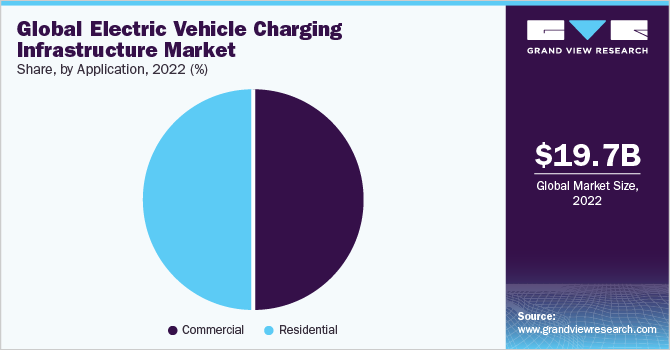 Various manufacturers of chargers such as Efacec; EVE Australia Pty Ltd.; and Tesla, Inc. are partnering with contractors that are developing residential complexes. For instance, in October 2020, the Pend Oreille Public Utility District announced the launch of a new EV charging pilot system with SemaConnect Inc. This charging station will enable visitors of PUD’s Newport Administration Building to charge their electric cars for free.

Asia Pacific dominated the market and accounted for more than a 59% share of the global revenue in 2021. Countries such as China, Japan, and South Korea are the hub of electric vehicles that heavily investing in the development of charging infrastructure. For instance, in October 2015, the Chinese Government announced its intention to invest in the deployment of EV infrastructure to accomplish its target of supporting 5 million EVs, on-road, by 2020.

Besides, South Korea announced an investment of around USD 180.3 million for expanding the EV charging infrastructure across the nation as its endeavor to promote eco-friendly vehicles in the transportation sector. Moreover, Japan’s electric charging station surpassed the number of petrol stations with more than 40,000 charging outlets in 2020

Various European countries have set ambitious targets for curbing carbon emissions and electric car stock commitments by 2020. For instance, in July 2018, the U.K. government passed the Automated and Electric Vehicles (AEV) Act. It provides the government with new powers to ensure the rapid development of EVCI on motorways and fuel stations.

In October 2014, Germany established the German National Platform for Electric Mobility, an advisory body of the German Government, to analyze the development of electric mobility and the development of publicly accessible electric vehicle charging infrastructure. Other European countries, such as France, the U.K., Germany, and Belgium, are also focusing on developing the EV charging and support infrastructure to enable EV interoperability throughout the region.

The market players are continuously working on new product developments and upgrades of their existing product portfolio. For strategic growth, these players prefer collaborations with other EV manufacturers. For instance, in 2016, ChargePoint, Inc., one of the leading market players, collaborated with BMW of North America, LLC and Volkswagen of America, Inc. for setting up approximately 100 DC fast-chargers across the east and west coasts of the U.S. ChargePoint Inc. has been undertaking various strategic initiatives to expand its presence in Europe.

The market players are also consolidating their market shares by undertaking M&A activities. In 2017, Chargemaster Plc announced the acquisition of Elektromotive Limited, an infrastructure supplier, along with its subsidiary (Charge Your Car). Through this acquisition, the former planned to expand its existing portfolio and customer services. In 2018, BP plc acquired Chargemaster Plc, the U.K.’s leading supplier of EV chargers and the largest EV charging network. Post-acquisition, Chargemaster Plc has rebranded to BP Chargemaster. The acquisition enabled BP plc to deploy a fast and ultra-fast charging network on BP’s U.K. forecourts. Some prominent players in the global electric vehicle charging infrastructure market include:

This report forecasts revenue growth at global, regional, and country levels and provides an analysis of the latest industry trends in each of the sub-segments from 2017 to 2030. For this study, Grand View Research has segmented the global electric vehicle charging infrastructure market report based on charger type, connector, application, and region:

How big is the electric vehicle charging infrastructure market?

b. The global electric vehicle charging infrastructure market size was estimated at USD 19.26 billion in 2021 and is expected to reach USD 25.64 billion in 2022.

What is the electric vehicle charging infrastructure market growth?

Who are the key companies/players in the electric vehicle charging infrastructure market?

What are the factors driving the electric vehicle charging infrastructure market growth?

b. Key factors driving the electric vehicle charging infrastructure market growth include the rising focus of government agencies on providing funds to Original Equipment Manufacturers (OEMs) for the development of charging stations.