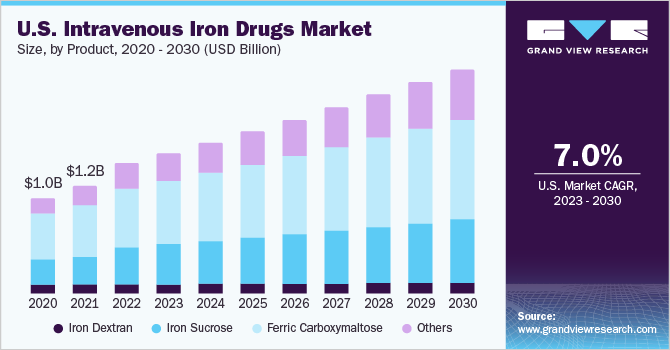 The COVID-19 outbreak has disrupted manufacturing and supply of intravenous iron drugs, however, robust initiatives by manufacturer and government to meet the demand has supported the growth of the market for intravenous iron drugs. In addition, various studies have suggested that Covid-19 infection has increased risk of Acute Kidney Injury (AKI) and CKD, which, in turn, has fueled the demand for intravenous iron drugs for the treatment of CKD-related anemia. According to the study published by the National Kidney Foundation, people hospitalized with COVID-19 are at significant risk of AKI. The study stated that patients hospitalized with COVID-19 were twice as likely to develop AKI as compared to non-COVID patients. Health authorities recommended that COVID-19 patients who had an AKI should be tested regularly as their risk of developing CKD is higher than others.

Anemia is one of the most common blood disorders in recent times. According to the National Heart, Lung, and Blood Institute, an estimated 3 million individuals suffer from anemia in the U.S. Increasing prevalence of target diseases, such as rheumatoid arthritis, autoimmune diseases, kidney conditions, cancer, liver disorders, thyroid diseases, and inflammatory bowel diseases, is a major factor facilitating the growth of the market for intravenous iron drugs. Some of the most common forms of anemia are iron and vitamin deficiency, a plastic, hemolytic, and sickle cell. Some of the common causes of anemia are iron, vitamin A and B12, and folate deficiencies. Infectious diseases such as tuberculosis, parasitic infections, malaria, and HIV are major causes of anemia across the globe. Data from WHO indicates that approximately 42% of children below the age of 5 and 40% of pregnant women are suffering from some form of anemia.

According to the National Kidney Foundation, Inc., the two major causes of CKD are diabetes and hypertension. Data from the same source also indicates an estimated 10% of the global population is affected by chronic kidney disease, with over 2 million individuals receiving dialysis on a regular basis. The majority of these individuals are typically seen across countries such as Italy, the U.S., Germany, Japan, and Brazil. A vast majority of individuals suffering from the disease are not aware until serious symptoms manifest. It is estimated that the incidence of chronic kidney cases will rise across developing economies, such as India and China, which implies an increase in the geriatric population over the coming years. With the growing prevalence of these diseases, the need for intravenous iron drugs has risen significantly.

One of the major drawbacks of oral iron drugs is their risk of severe adverse effects. Common adverse effects of oral iron drugs include digestive problems such as stomach aches, constipation, loss of appetite, nausea, and vomiting. The overdose of oral iron drugs may also induce convulsions, shallow or rapid breathing, tiredness or weakness, fatigue, pale skin, and bluish skin or fingernails. The use of intravenous iron drugs, on the other hand, has shown to bring about increased iron uptake by the body, facilitating Erythropoiesis-stimulating Agents (ESAs) to function in an enhanced manner to lower anemic conditions. Other advantages of intravenous iron drugs include the preservation of heart health and the ability to be used by dialysis patients, especially those undergoing hemodialysis. These adverse effects are, hence, anticipated to facilitate the switch to intravenous iron drugs, increasing the uptake of the same during the forecast period.

The Ferric Carboxymaltose (FCM) segment dominated the market for intravenous iron drugs and held the largest revenue share of 46.9% in 2020 and is predicted to hold its dominance during the forecast period due to its increasing application, superior performance, and reduced cost. It is a parenteral dextran-free iron drug indicated for rapid and high-dose replenishment of depleted iron stores. This drug is a stable complex with the advantage of having non-dextran content and very minimal immunogenic potential; therefore, poses a very low risk of anaphylactic reactions. Its beneficial properties facilitate rapid infusion (15 minutes) without requiring a test dose. Thus, it reduces the requirement of multiple small doses and long infusion times. FCM has greater efficacy with respect to improving hemoglobin levels and results in limited adverse events. The significant growth can also be credited to the FDA clearance of Injectafer in North America and its clearance outside North America under the trade name Ferinject.

The others segment is anticipated to show significant growth over the forecast period, owing to the introduction of new iron drug formulations. The others segment includes ferric gluconate, iron isomaltoside, ferumoxytol drugs, and ferric pyrophosphate citrate. Some of the major drugs included in this segment are AMAG Pharmaceuticals, Inc.’s FeraHeme, Sanofi’s Ferrlecit, Pharmacosmos’ Monofer and Diafer, Shield Therapeutics plc’s Feraccru, and Rockwell Medical’s TRIFERIC. Ferric gluconate has been introduced in the U.S. market as a safer alternative to intravenous iron dextran. Ferumoxytol drugs can be administered rapidly and in large doses without the need for test dose, leading to high revenue generation. Hence, the others segment is anticipated to witness the fastest growth over the forecast period.

The chronic kidney disease segment dominated the market for intravenous iron drugs and held the largest revenue share of 30.8% in 2020. Its leading share is attributed to the increasing prevalence of CKD and the high incidence of IDA among CKD patients. IDA is a common complication in patients with CKD. It is not common in early kidney disease; however, it occurs as the disease worsens and kidney function is lost. CKD patients tend to develop a smaller number of Red Blood Cells (RBCs), which causes anemia. The rise in CKD cases is significantly increasing the number of patients suffering from IDA. Intravenous iron product is the standard treatment for patients with dialysis and non-dialysis associated CKD. Anemia and end-stage renal disease are interrelated; dialysis patients who have kidney failure and kidney transplant patients, are likely to have anemia. CKD patients tend to develop anemia commonly (15.4%) as compared to the general population (7.6%). From stages 1 to 5, the prevalence of anemia in CKD patients increased from 8.4% to 53.4%. 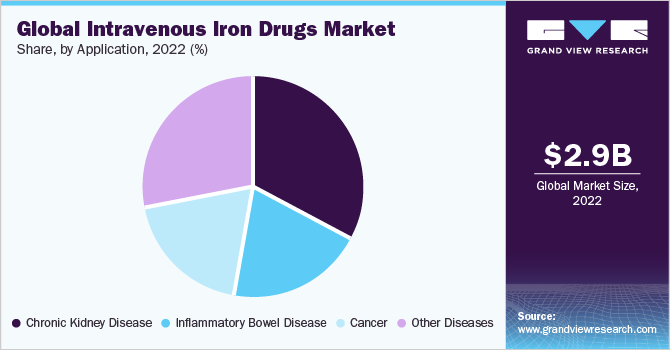 The cancer segment is anticipated to witness the fastest CAGR over the forecast period owing to the high incidence of cancer and subsequent rise in the number of IDA cases. A significant number of cancer patients tend to develop IDA. Common types of cancer that are linked to anemia include blood cancer, bone cancer, cervical cancer, colon cancer, and prostate cancer. Lung and breast tumors have been reported with the highest prevalence of anemia among solid tumors, as per NCBI. Hematologic malignancies such as leukemia, lymphoma, and multiple myeloma produce abnormal blood cells that subsequently harm the immune system and lead to anemia. Cancer treatments such as chemotherapy and radiation therapy also lead to anemia in cancer patients. Hence, in many cases, treatment of anemia delays treatment of cancer until the patient’s RBCs recover. According to NCBI data published in 2018, the prevalence of IDA in hematologic and solid malignancies ranges from 7% to 42%.

In Asia Pacific, the market is expected to grow at the fastest rate during the forecast period. This can be attributed to the geographical expansion of key players in Asia Pacific countries, coupled with developing healthcare infrastructure and increasing government initiatives. In addition, the high prevalence of IDA in emerging economies, such as China and India has also supported market growth. Europe held the second-largest revenue share in the market for intravenous iron drugs in 2020 and is anticipated to witness significant growth during the forecast period. This can be attributed to the local presence of major market players, increasing development and commercialization of new drugs, adoption of novel products, and increasing incidence of cancer in the region. The launch of new drugs has been a key factor facilitating increased uptake of iron drugs.

The market for intravenous iron drugs is highly competitive owing to the presence of many global players. Market participants such as Daiichi Sankyo Company, Ltd. and Vifor Pharma Management Ltd. accounted for the majority of market revenue share in 2020. They adopt different growth strategies such as new product development and expansion of geographical reach, to capture larger shares in the market. For instance, in September 2020, the company announced the establishment of its wholly-owned subsidiary Daiichi Sankyo Vietnam Company Limited. This initiative was undertaken in order to enhance the company’s business platform in Asia. Some of the prominent players in the intravenous iron drugs market include:

This report forecasts revenue growth at global, regional, and country levels and provides an analysis of the latest industry trends in each of the sub-segments from 2016 to 2028. For the purpose of this study, Grand View Research has segmented the global intravenous iron drugs market report on the basis of product, application, and region:

Who are the key players in the intravenous iron drugs market?

What are the factors driving the intravenous iron drugs market?

b. Key factors that are driving the market growth include the growing prevalence of chronic kidney disease, the increasing number of patients undergoing dialysis, and the rising geriatric population.

How big is the intravenous iron drugs market?

b. The global intravenous iron drugs market size was estimated at USD 2.2 billion in 2020 and is expected to reach USD 2.4 billion in 2021.

What is the intravenous iron drugs market growth?