The global kenaf seed oil market size was valued at USD 170.0 million in 2018. Increasing demand for biofuel to restrain increasing global warming by reducing fossil fuel consumption is expected to promote the use of kenaf seed as a precursor over the next few years. Furthermore, this oilseed is expected to gain traction as a functional ingredient in the formulation of various cosmetics products due to the high amount of omega-6 fatty acids, which aids skin health.

Rising concerns over global warming due to high fossil fuel consumption is a key factor expected to increase the demand for kenaf seed as a functional ingredient for the processing of biofuels over the forecast period. However, high investment costs associated with oil and gas exploration activities and increasing prices of fossil fuel are hampering the growth. Therefore, governments across the globe are promoting the development of eco-friendly kenaf seed-based biofuel. For instance, in May 2018, the Ministry of New and Renewable Energy (MNRE) of Government of India passed a National Policy on Biofuels under which an amount of USD 719.1 million will be spent in the next six years on the advancement and development of second-generation (2G) ethanol biorefineries. These plant-based fuels are the eco-friendly substitute for fossil fuel and can offer efficient performance with less environmental harm. These initiatives are expected to open new market avenues for kenaf seed oil as a biodiesel additive soon. 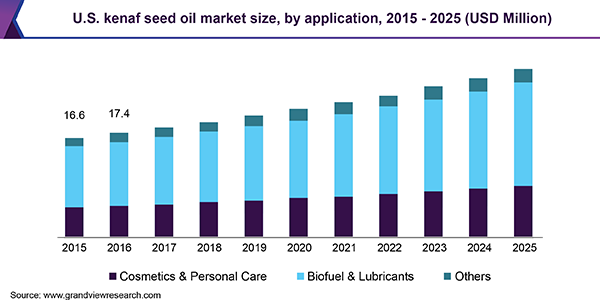 The fiber produced during the extraction process of seed oil finds a wide range of applications in various industries including textile, paper, and construction industries. Owing to the increasing the application of the kenaf seed fibers across various industries, the governments are taking initiatives for the promotion and development of kenaf crop. For instance, according to the National Kenaf and Tobacco Board of Malaysia, in 2017, 2213 hectares of land was developed for the cultivation of kenaf crop, which was increased to 2,500 hectares in 2018. The government of Malaysia is focusing on the development of kenaf fiber to cater to the increasing demand among various industries.

Biofuel and lubricants held the largest share in 2018 and are expected to expand at the fastest CAGR of 6.3% in terms of revenue from 2019 to 2025. Increasing the application of biodiesels at a global level owing to the association of non-toxicity and considerably fewer emissions properties as compared to petro-based gasoline and other fuel products is expected to remain a prominent trend. Moreover, stringent government regulations on lowering the carbon emissions, coupled with initiatives for achieving sustainability through biodiesel promotion in developed economies of North America and Europe, are expected to boost the kenaf seed oil market growth over the forecast period.

Kenaf seed-based oil finds a wide range of applications in cosmetics and personal care products including soap, shampoo, conditioners, hair spray, deodorants, face washes, and scrubs. The product acts as a rich source of proteins, antioxidants, essential fatty acids, polyunsaturated fatty acids, and other nutrients. These nutritional properties are expected to increase the application areas of these seed oil in the foreseeable future.

The Asia Pacific was the largest regional market, accounting for 67.7% share of the global revenue in 2018. Rising concerns over increasing global warming, coupled with reducing fossil fuel resources in countries including China, Japan, and South Korea, is a primary factor increasing the demand for kenaf based seed oil. Besides, the government of various countries including India, China, Bangladesh, and Malaysia is taking initiatives to promote kenaf crops to increase sustainable development in the region.

For instance, according to a report published by state media, in September 2017, China has planned to adopt the use of ethanol petrol nationwide by the year 2020. The government is largely focusing on the domestic production of biofuels, which are primarily made from cellulosic plants, including kenaf, crop waste, grasses, and trees. These initiatives are expected to open new avenues for the seed cultivators and ensure a significant increase in the demand in the next few years. 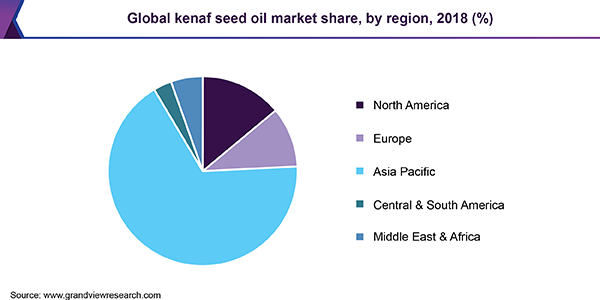 The fiber obtained from the seed is widely used in the textile and paper industry. Owing to these properties, various other governments are supporting the kenaf seeds production for various applications in different industries. For instance, in April 2017, the Federal Ministry of Agriculture and Natural Resources, the government of Nigeria announced to promote the cultivation of kenaf crops in the country as the crop provides a substantial boost to the country’s economy. These government initiatives ensure the subsequent growth and open new avenues for the kenaf seed cultivators in the region.

The market is extremely fragmented owing to the limited presence of the crop cultivators across the globe. Moreover, a large number of domestic players such as Hemp, Inc., Chempro Technovation, and Shree Raghvendra Agro Processors are prominent in different regions. Moreover, key manufacturers are adopting market strategies including mergers with the local cultivators of the region, increasing the chemical properties of the seed oil to expand application areas, new product launches, and expanding distribution channel to gain the maximum customer base as well as to cater to the demand of increasing health-conscious customers.

Major players are increasing their product visibility geographically, especially in developed countries including the U.S., Canada, and Germany, as various governments are promoting biofuels. Moreover, the establishment of R&D centers for product innovation, coupled with strategic partnerships with investment companies to launch new innovative products as per the customer’s demand in the region, is expected to remain a critical success factor over the next few years. Taking into account all the above-mentioned factors, producers are likely to focus on technology innovation catering particularly to developing countries and untapped market to gain maximum market share.

This report forecasts revenue growth at the global, regional, and country levels and provides an analysis of the latest industry trends in each of the sub-segments from 2015 to 2025. For this study, Grand View Research has segmented the global kenaf seed oil market report based on application and region: