The global kids bicycle market size was valued at USD 4.1 billion in 2018. The market expansion is attributed to shifting focus towards bicycling as a sport and fitness activity both by parents and teachers. With changing lifestyle, cycling took a space where it is more of a fun activity, which kids prefer doing during their leisure time with their friends. The activity is further supported by schools, clubs, and residential societies that have been taking initiatives to include cycling for kids in their day-to-day life. In addition, the bicycle offers a convenient personal mode of transport for students.

It has been observed that kids are especially interested in bicycles with the inclusion of bright colors and modern designs. Furthermore, most of these bicycles are patterned after famous superheroes, sportsman, comic characters, and kids’ celebrities. Along with this, children prefer products that have musical horns, lighted wheels, and come with baskets either in front of the handlebars or behind the seat. 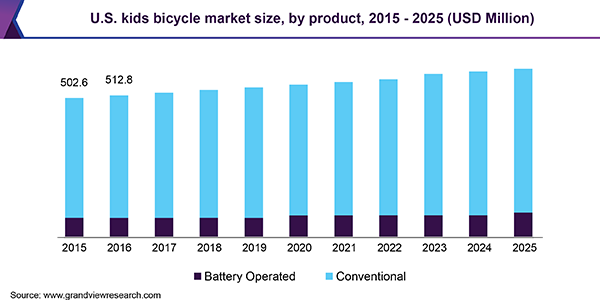 Another popular variety of bicycles often preferred by same-aged siblings is two-seater bicycles, wherein both are facilitated with pedals. Thus, it can be observed that manufacturers have been introducing a new feature in their products frequently to capture the interest of their directed audience. Over the past few years, manufacturers have been organizing events including marathon, races, and sporting events that promote cycling among kids. These events allow the interaction of the product brands with the children of all age groups.

For instance, CFOSE, India International Cycle, Fitness, and Outdoor Sports Expo hosted in Ludhiana every year since 2010, attracts an audience from across the country, and displays products. Similarly, in June 2019, an annual children’s bicycle ride was organized in Burlingame, where 600 kids had participated. Many of these events even focus on training kids to ride a bicycle. In June 2019, Texas Police helped kids in learning bicycle riding during the Arlington Community Bike Rodeo along with distributing free helmets.

Conventional products accounted for a share of more than 80.0% in 2018. This growth is attributed to the easy access of these products in various price ranges by different brands to suit the customized requirements. In addition, environmentalists have been striving hard to leave a deep impression on kids about the positive effects of cycling on the environment. Pediatric researches and doctors have been constantly focusing on the positive effects of cycling on kids. According to research published in the Scandinavian Journal of Medicine and Science, sports cycling as a fitness activity benefits the body as well as mind.

Battery operated products are expected to witness the fastest growth, expanding at a CAGR of 3.2% from 2019 to 2025. The growing popularity of battery-operated bicycle is attributed to the assistance of pedals as well as a rechargeable battery backup in the same product. The above-mentioned features are expected to promote the utility of the bicycle during camping and riding uphill. Along with this, the governments of various countries of Scandinavia have been urging their citizens to use bicycles owing to environmental factors. Therefore, these trends are expected to promote the utility of electric-based bicycles among kids in the near future.

Offline channels accounted for the largest share of 85.0% in 2018.  Kids have started preferring test rides prior to the purchase of the product. Moreover, parents are conscious of the safety of their children and prefer authenticating the product before buying. Organizations have been rapidly entering the kids bicycle market to leverage the opportunity. Decathlon, a French sporting goods retailer, has evolved as a major distributor of bicycles for kids in more than 49 countries. 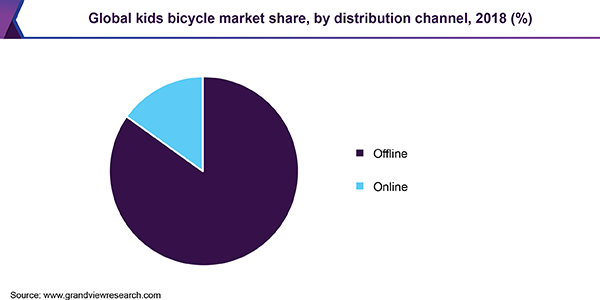 Online sales are expected to witness the fastest growth as a result of increasing penetration of the parents using smartphones and tablets across the globe. These channels provide access to various products irrespective of any regional and country barriers. Furthermore, big brands such as Cervélo and Cicli Pinarello SRL prioritize the initial sales of products through online channels. E-retailers including Paytm Mall, Amazon, Snapdeal, and Trackntrail have been evolved as major suppliers of the bicycle in India and nearby South Asian countries.

Europe was the largest market, accounting for more than 25.0% share of the global revenue in 2018. This growth is attributed to increasing awareness among people and kids regarding bicycling. The increasing number of cycling in countries including Belgium, Switzerland, Finland, Norway, Sweden, Germany, Denmark, and the Netherlands is expected to have a positive impact on regional market growth. In addition, roadways have been designed such that cyclists ride on altogether a different path, which is separated from motor riders. This ensures the safety and negligible traffic for riders. Looking at these, kids prefer riding a bicycle for short-distance commutes.

Asia Pacific is expected to be the fastest-growing market, expanding at a CAGR of 3.3% from 2019 to 2025. The bicycle has gained popularity among young riders as countries such as Japan and China are motivating their citizens to use a bicycle. Furthermore, they are being promoted to ride it more for health-related reasons and to fight obesity. Further, the huge population and crowded cities are struggling with traffic, unsafe roads, and pollution.

Some of the key players are Giant Bicycles, Trek Bicycle Corporation, Specialized Bicycle Components, SCOTT Sports SA, Cannondale, GT Bicycles, MERIDA BIKES, Fuji Bikes, Cervélo, Cicli Pinarello SRL, Santa Cruz Bicycles, COLNAGO, and KONA. The market is driven by continuous product renovations and inclusion of features such as bright colors and themed after superheroes, which is attracting kids all over the world.

Schools and residential communities have been trying to awaken children’s interest in bicycling owing to environmental reasons, health benefits, and safety. Moreover, kids bicycles have evolved as a major giveaway for promotion of the product as well as a contribution to society. In July 2019, woom bikes distributed 30 bicycles and helmets to kids in Hammond.

This report forecasts revenue growth at the global, regional, and country levels and provides an analysis on the latest industry trends and opportunities in each of the sub-segments from 2015 to 2025. For the purpose of this study, Grand View Research has segmented the global kids bicycle market report on the basis of product, distribution channel, and region: