The global lactase market size was valued at USD 185.2 million in 2019 and is expected to grow at a compound annual growth rate (CAGR) of 5.1% from 2020 to 2027. Factors, such as increasing demand for lactose-free dairy products and rising product development & innovations in other application areas, are expected to drive the market growth. Lactase is predominantly used in the food & beverage application, majorly consumed as dairy enzymes, as it makes the dairy products lactose-free by reducing and/or eliminating the lactose content. The growing cases of lactose-intolerance across the globe is one of the key factors augmenting the product demand. 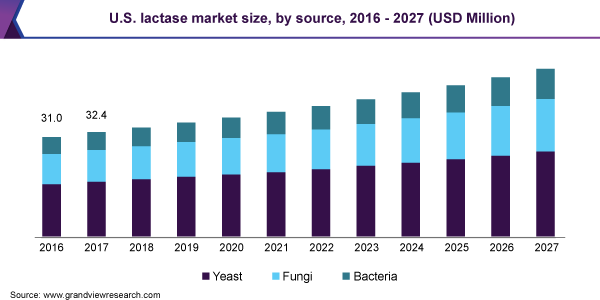 The market in the U.S. is projected to exhibit high growth on account of growing consumer demand for dairy-free products, which is propelled by the rising prevalence of food intolerance and allergies. In addition, heavy investments by major companies, such as DuPont Nutrition & Health and Amano Enzyme USA Co., Ltd., to introduce new lactase enzymes for the development of cream spreads, milk-based ice creams, and other lactose-free products are estimated to spur the market growth in the country.

As per the article published by Intermountain Healthcare in 2017, over 65% of the human population suffers from lactase deficiency, a condition that occurs naturally in the intestinal tract of adults and children. People that have lactase deficiency are unable to absorb lactose present in the milk and suffer from diarrhea, bloating, or flatulence. This factor is likely to result in a rise in the consumption of lactase-based supplements to avoid gastrointestinal problems.

Lactase converts the sugar found in dairy products to readily digestible sugars, such as galactose and glucose. Therefore, rising consumer awareness about overall health and wellness is projected to spur the consumption of lactase-based milk and milk products, thereby boosting the market growth.

However, rising demand for plant-based dairy products, such as soy, almond, and coconut milk, is likely to limit the growth of the lactase market over the next few years. Moreover, on account of the absence of cholesterol and lactose in products, such as nut butter, nut cream & cheese, and vegan yogurt, the demand for these products along with the rising vegan population is projected to witness significant growth.

The yeast source segment accounted for more than 44% share of the global revenue in 2019. Lactose-fermenting yeasts, such as Kluyveromyces marxianus and Guehomyces pullulans, are categorized under Generally Recognized as Safe (GRAS)chemical or substance by the U.S. Food and Drug Administration (FDA). Therefore, yeast-based lactase is widely used in manufacturing distinguished food & beverage and dietary supplement products.

Lactase is obtained from the controlled fermentation of yeasts, wherein the β-glycosidic bond in D-lactose is hydrolyzed by Β-galactosidase to form D-glucose and D-galactose. Moreover, lactose hydrolysis decreases the freezing point and increases sweetness in the dairy products. The growing availability of lactose-free products, such as milk powder, ice-cream, and spreads & butter, is anticipated to spur the overall market growth.

Extensive research & development activities are going on regarding the hydrolysis of lactose by other sources of lactase enzymes, such as fungi and bacteria. Bacteria-based lactase is being increasingly used for cleaving lactose in food processing and dietary supplement industries as the product offers various benefits, including high activity & stability, and ease of fermentation of the enzymes.

Furthermore, lactase sourced from fungi has an acidic pH range of 2.2 to 5.4. Therefore, fungal lactase is widely used for lactose hydrolysis of acidic whey. Enzymes sourced from Kluyveromyces lactis, Aspergillus, and Kluyveromyces fragilis (Sacchoramyces fragilis) species are highly stable enzymes. The growing R&D on these sources of enzymes is likely to open new avenues for the global market over the next few years.

The food & beverage application segment led the market and accounted for more than 60% share of the global revenue in 2019. The rising awareness regarding health and growing incidences of lactase non-persistence is anticipated to fuel the market growth in the coming years. Increasing consumption of high-quality foods offering natural flavor and taste contributed to the segment growth. Lactase enzymes act as catalysts in breaking down lactose (a disaccharide) into smaller compounds, namely galactose and glucose.

Dairy manufacturers are expanding their consumer base by launching newer products that are low-fat, low-sugar, and are rich in proteins, fibers, and vitamins. Rising awareness about digestive health issues is projected to augment the consumption of lactase-based dietary supplements. Moreover, the introduction of new delivery forms, such as strength caplets and fast act chewables, to prevent lactose digestion problems including gas, abdominal bloating, nausea, stomach ache, and diarrhea are anticipated to further spur the product demand in dietary supplements applications.

Powder-based lactase led the market and accounted for more than a 64.0% share of the global volume in 2019. Lactase powder is a non-toxic biological enzyme, which fulfills the Food Chemical Codex (FCC) and Joint FAO/WHO Expert Committee on Food Additives (JECFA) specifications for food-grade substances, allowing the utilization of the product in various food and dietary supplements applications.

As per the paper published by the National Center for Biotechnology Information (NCBI) in 2017, over 20% of the population consuming a typical Western diet suffers from digestive problems; thereby making indigestion of food as one of the key health concerns. 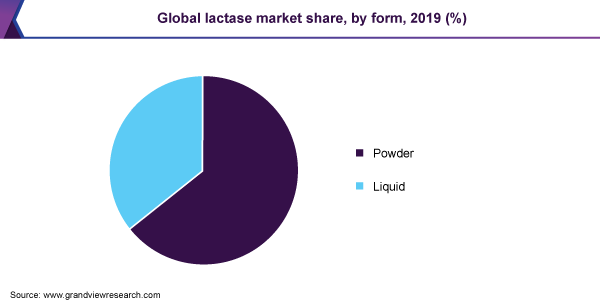 Healthy digestion plays an important role in maximizing energy levels, proper functioning of the immune system, and maintaining the nutrient uptake of the consumed food. Thus, rising consumption of lactase tablets, chewable, and capsule supplements to prevent vomiting, gas, and flatulence due to lactose intolerance is projected to drive the market growth over the next few years.

Liquid lactase is less stable as opposed to its powder form, yet has better functionality and higher activity. The product is extensively used in pharmaceutical applications for manufacturing syrups, tonics, and drops. Liquid-based lactase accelerates biological, metabolic, and chemical reactions in the human body by adjusting a reaction’s efficiency, thereby making the pharmaceutical products more suitable for human consumption.

Europe led the market in 2019 and accounted for over 48% share of global revenue. The demand for dairy enzymes is high in Europe owing to the presence of a developed food & beverage processing industry. Furthermore, technological advancements and the presence of key manufacturers, such as DSM and Chr. Hansen Holding A/S, in Europe, is among the significant factors driving the regional market. Favorable outlook towards health & nutrition has led to an increase in per capita expenditure on lactase-based dietary supplements in the region.

The Asia Pacific is estimated to be the fastest-growing regional market from 2020 to 2027 on account of the increased economic importance of lactase enzyme over the last decade. Development of the food & beverage sector and rapid industrialization in the region, especially in China, India, and Vietnam, have opened up new opportunities for the market in the Asia Pacific.

An estimated 80% of adults in Central Asia and 90-100% in East Asia have an impaired ability to digest lactose, which in contrast is at 2% in Denmark. On account of the majority of the Asian population suffering from lactase deficiency, the demand for lactose-free dairy products is likely to increase, thereby supporting the market growth.

Leading market players are largely concentrated in Europe and North America and are eyeing the untapped opportunities in the emerging economies to capitalize on their global market foothold. For instance, Chr. Hansen Holding A/S is focusing on expanding its business in the Middle East & Africa (MEA) and Latin America, thereby reducing the dependency on the European market. Acquisitions and product launches are some of the strategic initiatives undertaken by most of the major companies in the industry.

In July 2020, DuPont Nutrition & Biosciences (N&B) introduced Danisco Bonlacta, a new lactase enzyme solution developed for creating a nutritional profile in terms of fiber and sugar content for lactose-free dairy products. The product was introduced for the North American market and is a thermophilic type of lactase that has a unique capacity to withstand high-temperature processing methods. Some prominent players in the lactase market include:

This report forecasts revenue growth at global, regional, and country levels and provides an analysis of the latest industry trends in each of the sub-segments from 2016 to 2027. For the purpose of this study, Grand View Research has segmented the global lactase market report on the basis of source, form, application, and region:

What is lactase market growth?

Which segment accounted for the largest lactase market share?

b. On the basis of source, the yeast segment dominated the lactase market with a volume share of 47.5% in 2019. Growing demand for yeast-based lactase in the dairy processing and dietary supplements industry owing to its ability to eliminate and/or reduce lactose in the said application industries is likely to spur the product demand in the global market.

Who are the key players in the lactase market?

What are the factors driving the lactase market?

b. The key factors that are driving the lactase market include increasing awareness among individuals regarding health and wellness, which has led to a rise in consumption of enzyme-based foods, such as milk powder, butter, infant milk formula, and sour cream; which not only adds useful nutrients to the diet but also improves digestion.

How big is the lactase market?