The global large SUVs market size was valued at USD 322.7 billion in 2021 and is expected to expand at a compound annual growth rate (CAGR) of 0.5% from 2022 to 2028. The market is majorly driven by the increasing demand from the Middle East and Europe, attributed to the rising popularity of the sports utility vehicles, which is outpacing the others. The popularity of large SUVs is attributed to their properties, such as the look of a car and the functionality and power of the utility vehicle, over other passenger cars. It offers more capacity, and a higher vantage point for drivers due to higher seating, attractive styles, and connected features like passenger cars. Budding market demand for large SUVs in China is also contributing to the global market growth. Furthermore, frequent launches of large SUVs by manufacturers are fueling the market growth. For instance, Volkswagen launched Touareg R in October 2020 which comes with a plug-in hybrid system. Toyota Urban Cruiser launched in September 2020, among many others. 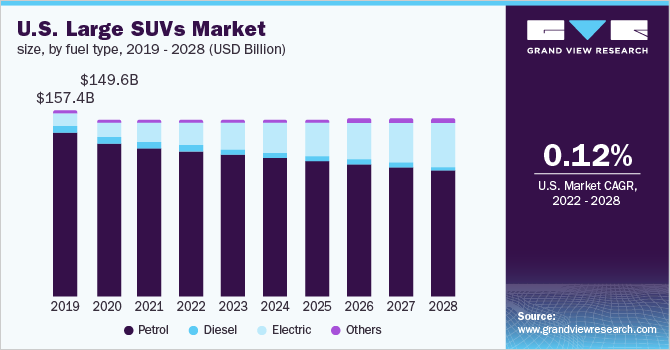 Large SUVs market growth is restrained by the rising concerns about environmental issues and safety. Due to the large and heavy body of the large SUV, energy consumption is far more compared to the other medium-sized and small passenger cars and subsequent increase in CO2 emissions. Large SUVs are more prone to rollover due to the large size of the SUV and higher center of gravity. These aspects of the large SUVs are expected to restrain the global market growth.

The market of the large SUV experienced a drop in the growth rate as a result of the COVID-19 pandemic worldwide. The pandemic disrupted the supply chain of the auto components and manufacturing process, global output of large SUVs plummeted as well as sales. However, with the resumed manufacturing process, supply chain and fast ongoing vaccination process the market will recover in the forecast years, with a little shadow of the pandemic.

By fuel type segmentation, the petrol segment dominated the global large SUVs market, registering a market share of around 70% in 2021. Market share of petrol SUVs is still dominating due to consumer preference attributed to the better fuel efficiency, easy maintenance, and easy availability. Over the last few years, many carmakers have stopped producing diesel vehicles as diesel cars are more polluting than others, which also resulted in the adoption of petrol vehicles. Electric vehicles, on the other hand, are still not widely available and tend to be expensive. For instance, as reported on 30th March 2020, the Indian government announced that the diesel version of 40 cars and SUVs will be phased-out of the market.

In the global large SUVs market, the electric segment by fuel type is anticipated to witness the highest growth rate over the forecast period. The electric segment is pegged to register a CAGR of 11.1% from 2022 to 2028. The segment growth is attributed to the government initiatives to lower the greenhouse gas emission and manufacturers' increased product launches, majorly in Europe. For instance, ZLEV credit scheme in Europe offers incentives for selling electric SUVs from 2025. Moreover, many carmakers are planning to go all-electric in the future phasing out fossil fuel models, expected to significantly contribute to the segment growth.

North America dominated the global market in 2021, recording around 50% market revenue share. The huge popularity of large SUVs, the strong presence of key players in the region, higher spending on passenger cars, and higher purchasing power are attributable to higher market share. Higher demand and sales rate in the U.S. significantly contribute to the market share of North America in the global market, according to the International Energy Agency. The popularity and shifting consumer preference for large SUVs also resulted in the discontinuation of their counterparts, such as sedans. 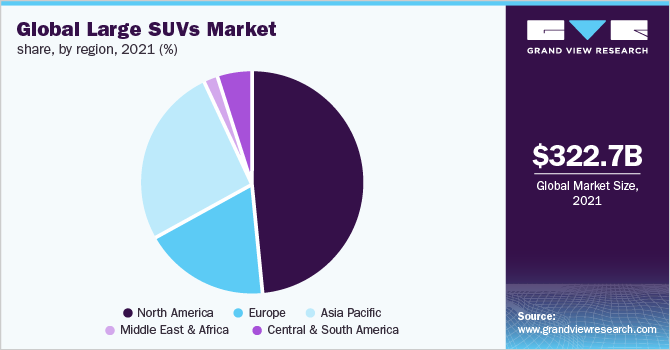 In the global large SUVs market, Europe is expected to witness the highest growth rate over the forecast period. The region is anticipated to register a CAGR of 1.1% from 2022 to 2028 in the global market. Market growth is attributed to the rising popularity of SUVs, increasing spending on personal cars, and frequent product launches in the region. According to the European Federation for Transportation and Environment, large SUV sales and market share are strengthening the European market.

The majority of the market is captured by global companies playing important role in the market. The main focus of the companies is to increase sales through product launches, R&D activities, and expansion to the new geographies. For instance, Hyundai Motor India plans to increase its SUV portfolio in India as published in February 2021, which includes a seven-seater SUV. General Motors Co. is working on expanding the Corvette line with crossover SUV, published on 15th January 2021. Companies are also actively focusing on the research and development in the electric SUVs sector. Some of the key players operating in the global large SUVs market include:

This report forecasts revenue growth at global, regional & country levels and provides an analysis of the latest trends and opportunities in each of the sub-segments from 2017 to 2028. For this study, Grand View Research has segmented the global large SUVs market based on fuel type, and region:

How big is the large SUVs market?

What is the large SUVs market growth?

Which segment accounted for the largest large SUVs market share?

b. North America dominated the large SUVs market with a share of 48.6% in 2021. This is attributable to rising demand for large SUVs among consumers and growth of automotive and transportation industry.

Who are the key players in large SUVs market?

What are the factors driving the large SUVs market?

b. Key factors that are driving the large SUVs market growth include increasing demand for large SUVs from the Middle East and Europe, the rising popularity of the sports utility vehicles, and attractive styles and connected features offered by key players.