The global lateral flow assay market size was valued at USD 5.2 billion in 2018 and is anticipated to exhibit a CAGR of 4.0% during the forecast period. Lateral flow assays are cellulose based devices that are used to detect the presence of a target component in the liquid sample without the need for expensive or specialized equipment. Increase in the prevalence of infectious diseases is anticipated to boost market growth during the forecast period. According to a report published by WHO, in 2017, 219 million malaria cases were estimated in about 87 countries. Data from the same source also indicates that over 435,000 deaths were recorded due to malaria in 2017. Thus, rising incidence of infectious diseases is anticipated to result in demand for lateral flow assays.

Rise in initiatives taken by governments to curb malaria are anticipated to fuel market growth. For instance, in 2019, on World Malaria Day, WHO partnered with RBM, African Union Commission, and other partner organizations to create and spread awareness on malarial diagnosis and prevention. Rise in government investments is another factor expected to fuel market growth. 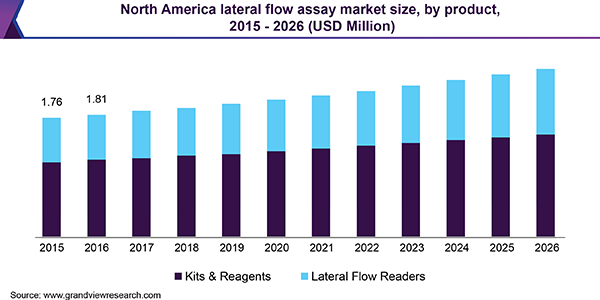 According to a report published by WHO, total funding for elimination and control of malaria reached an estimated USD 3.1 billion 2017. Funding contributed by governments of endemic countries amounted to USD 900 million, representing approximately 28% of the total funding. Therefore, increase in investments from governments to control malaria is expected to drive demand for lateral flow assays during the forecast period.

Lateral flow readers ensure precise interpretation of results for research, routine sample testing, and other development applications. In March 2019, Alere (now Abbott) announced the launch of its rapid influenza diagnostic test called BinaxNOW Influenza A & B Card 2. This test has been granted CLIA waiver to be used with Abbott’s diagnostic reader DIGIVAL. The diagnostic reader interprets and reads lateral flow tests in a few seconds and delivers objective and automated results in any healthcare setting. Thus, rise in use of lateral flow readers to interpret precise results is expected to fuel market growth.

In the recent past, lateral flow kits have also been developed for various new applications. For instance, in May 2019, the FDA permitted Zimmer Biomet to market Synovasure, a lateral flow test kit. This kit helps in the detection of periprosthetic joint infection in the synovial fluid of patients that have been evaluated for a knee revision surgery. This surgery is performed to compensate or replace a failed implant. Prior to this, kit there were no lateral flow assay kits approved by the FDA for the detection of infection in the synovial fluid. The commercialization of this kit is anticipated to aid e-healthcare professionals with effective clinical assessments that determine whether the patient needs surgery or not. Thus, rise in approval of kits for a wide range of applications is expected to drive demand for lateral flow assays during the forecast period.

Based on application, the market is segmented into clinical testing, veterinary diagnostics, food safety & environment testing, and drug development & quality testing. Clinical testing is expected to hold the largest market share owing to increase in the incidence of infectious diseases. According to the U.S. Department of Health & Human Services, it was estimated that in 2017, about 36.9 million people were living with AIDS/HIV, out of which 1.8 million were individuals above the age of 15. An estimated 1.8 million individuals were newly infected with HIV the same year. Therefore, rise in the prevalence of HIV is expected to fuel market growth during the forecast period. In October 2017, Atomo Diagnostics announced that its Atomo HIV Self-Test had been granted CE marking. It is a self-test device that provides convenience, in-field diagnostic performance, and ease of use. Thus, rise in new product approvals is expected to boost the demand for lateral flow assays.

Rise in incidence of HBV infection is also anticipated to boost the market during the forecast period. According to WHO, an estimated 257 million individuals were diagnosed with hepatitis B infection in 2018 and about 71 million individuals were estimated to be diagnosed with hepatitis C. To reduce the incidence of hepatitis, WHO has set some baseline targets to diagnose about 30% HBV infected individuals by 2020 and about 90% of the individuals by 2030. Therefore, increase in the prevalence of HBV infection is anticipated to drive demand for lateral flow assays during the forecast period.

The rise in prevalence of tuberculosis is expected to fuel market growth during the forecast period. According to WHO, an estimated 10 million individuals were estimated to be diagnosed with TB in 2017 and about 1.6 million individuals died due to TB. About 230, 000 children were estimated to be diagnosed with TB in 2017. Cardiac markers are biomarkers that are measured to evaluate the functioning of the heart. They are used in the diagnosis or early prediction of a disease. The cardiac marker testing segment is further segmented into Troponin I and T Testing, CK-MB Testing, BNP and NT-Probnp Testing, Myoglobin Testing, D-Dimer Testing, and other cardiac marker tests.

Troponin I and T Tests are used to measure levels of troponin in the blood. These proteins are usually released after damage has been caused to the heart muscles. The greater the damage the greater amounts of troponin are found in the blood. Roche offers Cardiac trop T sensitive test that enables the patient to conduct diagnostic tests even after several days of myocardial damage. The test kit is highly versatile, provides faster results, is portable, and can be easily handled. It also ensures reliable qualitative measurements and is cost effective.

The number of allergic reactions to food substances is increasing rapidly, thereby raising a great concern for food safety. Therefore, companies are undertaking strategic initiatives such as mergers and acquisitions to focus on food safety. For instance, in September 2017, 3M acquired Elution Technologies to expand its focus on food safety. By acquiring Elution Technologies, 3M has expanded its product portfolio by the addition of test kits to ensure that soy, peanuts, and milk products are free from harmful allergens.

Lateral flow assay can be developed in a dipstick format or as a housed cassette. Based on technique, the market is segmented into sandwich, competitive, and multiplex detection assay. The sandwich assay segment is expected to hold the largest market share owing to its affordability, accuracy, and ease of use. In sandwich assays, a positive test is represented by a colored line at the test line position. Results provided by sandwich assays do not require training and the test can be performed at any low resource healthcare setting.

In competitive assays a positive test is determined by the absence of a colored line at the position where the test line is situated. Both competitive and sandwich assays can be developed to include more than one test lines. For example, a nucleic acid lateral flow assay is multiplexed as it contains more than one test line. It is used for detecting multiple targets using a single test rather than using multiple tests.

Based on end use, the lateral flow assay market is segmented into homecare, hospitals and clinics, pharmaceutical and biotechnology companies, and diagnostic laboratories. Home care settings are expected to account for the largest market share due to increase in adoption of rapid diagnostic tests at low resource settings. As these test kits can be used by minimally trained healthcare professionals and are easily available in both underdeveloped and developed countries, they are widely used for the detection of infectious diseases, food safety, and veterinary diagnostics. 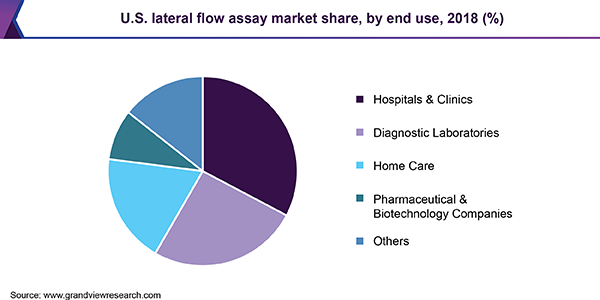 Hospitals and clinics are expected to witness lucrative growth due to increase in adoption of point of care testing, technological advancements, launch of innovative devices and technologies, and rise in patient inclination toward early and fast diagnosis. Rise in incidence of influenza is prompting more number of individuals to visit healthcare providers or physicians for the diagnosis of influenza. According to CDC, in 2017, 22.7 million individuals visited healthcare physicians or providers for the diagnosis of influenza in the U.S. Thus, increasing use of lateral flow devices at hospital settings is anticipated to drive demand for lateral flow assays during the forecast period.

North America is expected to witness the highest growth due to increase in incidence of influenza. According to CDC in 2016, 15.5 million infectious disease diagnosed patients visited hospital settings for primary treatment and disease management. It is also estimated that 9,272 new cases of tuberculosis and 36,429 new cases of Lyme disease were diagnosed in 2016. Thus, the rise in incidence of infectious diseases is expected to drive demand for lateral flow assays during the forecast period.

The Europe market is anticipated to exhibit a strong growth rate owing to rise in prevalence of HIV/AIDS and other infectious diseases. According to the European Centre for Disease Prevention and Control, approximately 2 million individuals in Europe were affected with HIV in 2018. An estimated 160,000 individuals were diagnosed with HIV in Europe in 2017. Therefore, rise in incidence of HIV in the region is expected to boost market growth during the forecast period.

Asia Pacific is expected to witness steady growth due to rise in infectious disease prevalence in countries such as Japan, China, and India. Rise in the prevalence of HIV is anticipated to fuel market growth during the forecast period. According to the National AIDS Control Organization, an estimated 21.40 lakh individuals were diagnosed with HIV in 2017 in India. Approximately 88 thousand new HIV cases have been recorded in 2017, out of which, women accounted for 40% of newly recorded HIV cases. Ten states of India -Bihar, Telangana, West Bengal, Andhra Pradesh, Uttar Pradesh, Gujarat, Karnataka, Maharashtra, Delhi, and Tamil Nadu - accounted for 71% of the total annual HIV infection in the country.

According to a report published by WHO, Africa accounted for the largest share of the global malaria burden in 2017. Also, the region had an estimated 92% malaria cases and about 93% of deaths due to malaria. Thus, rising adoption of lateral flow assays in the region is anticipated to propel market growth.

The Latin America region is also expected to witness increase in the market share owing to rise in awareness campaigns by various governments. In July 2019, a two-day workshop was organized by WHO, UNAIDS, and UNICEF to increase HIV awareness in Latin America. In August 2019, individuals from 9 countries in Latin America came together at the 10th International AIDS Society Conference on HIV Science in Mexico. The gathering was aimed at developing a youth-friendly communication strategy to create HIV awareness among young gay men. Thus, rise in government initiatives to increase HIV awareness is expected to fuel market growth.

Rise in product approvals is anticipated to fuel market growth during the forecast period. For instance, in May 2017, Quidel announced that its Sofia Influenza A+B immunoassay received 510(k) clearance and CLIA waiver from the FDA. This assay employs advanced immunofluorescence and lateral flow technologies in order to provide clinical sensitivity for influenza infections.

This report forecasts revenue growth at global, regional, and country levels and provides an analysis of latest industry trends in each of the sub-segments from 2015 to 2026. For the purpose of this study, Grand View Research has segmented the global lateral flow assay market report on the basis of product, application, technique, end use, and region: