Latin America and Caribbean hemp-derived derived cannabidiol market was estimated at USD 112.33 million in 2021 and is expected to expand at a compound annual growth rate (CAGR) of 18.6 % for the forecast period 2022 to 2030. Latin America and the Caribbean region has been a key region for cannabis, the low cost of labor and high potential of agricultural benefits from farming have been key drivers propelling growth in the region. The region has vast agricultural potential owing to which hemp farming can be cost-effective, similar quantities of hemp-derived products will have a lesser cost than its contemporary product grown outside. This is due to the low cost of labor and fewer construction costs in the region. 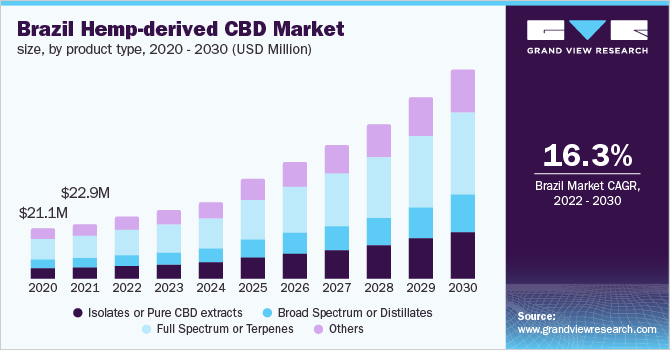 According to the Colombian Association of Cannabis Industries, the cost of raw products grown in the LATAM and Caribbean is three times lesser than its North American counterpart. The region has begun to see its potential to become a main hub for hemp farming and thus become a major economy in the medical cannabis market.

The legalization of cannabis has been increasing in the LATAM and Caribbean countries. The illegal trade of marijuana had been prevalent and decriminalization of its use has been a prolonged battle that the region’s authorities have been fighting. Many countries in the geography have legalized the use for medical purposes, but the cultivation of hemp is still stigmatized due to its abuse and illegal trade practices.

Many countries in the region have a basic implementation of the legal use of cannabidiol oil for medicinal purposes; patients receive medical prescriptions for use of hemp-derived CBD oil and then can import products from the countries or companies having distribution channels for the purchase of cannabidiol products. In Brazil, imports of this kind are restricted to only hemp-derived CBD and merely for specific treatment of epilepsy, under the Federal Council of Medicine.

The use of CBD in the LATAM and Caribbean has become more widespread, but the cultivation and retail selling of cannabidiol products has not been legalized. This is impeding the growth of the CBD market in the LATAM and Caribbean. Its extensive agricultural potential is being recognized by the government and along with multiple collaborations with various other countries in the form of foreign direct investments by the developed nations like the U.S. and Canada.

China has been keen on such investments especially pertaining to agriculture. China’s interest in the cultivation of hemp for industrial and medical purposes has been increasing in the past few years; investment in the regions’ hemp industry is foreseen to increase as a part of the increasing investment by China in the LATAM and Caribbean region.

Different countries have different legal statuses for CBD; most of the countries in the region have legalized hemp-derived CBD products for medicinal purposes, containing less than 1.0% THC and requiring a prescription by a physician. In countries like Colombia, Ecuador, Guyana, and Venezuela, any form of marijuana, CBD, etc. is illegal. Uruguay's government allows cultivation on a permit basis. Cultivation of hemp within this region is subject to a regulatory framework, which is still under a lot of stigmas. The cannabis market in the region is mostly illicit, but due to changes in the recent regulatory framework around the trade of cannabis, the illicit trade of cannabis and related products is slowly decreasing.

Uruguay became the first nation in the world to legalize the recreational use of marijuana and is still the only country in Latin America to legalize it for recreational use. Countries in LATAM and the Caribbean region have strict regulations even for the medical use of CBD. The governments in the LATAM and Caribbean region are becoming more liberal owing to the huge market potential and profit margins of hemp cultivation. In June 2021, Mexico’s Supreme Court legitimized adult-use recreational marijuana. In July, Colombia removed the ban on the export of dried cannabis flowers for medical use. An increase in the legalization of marijuana, hemp, and related products has come after the realization that the region holds an unsurmountable potential as far as the hemp and CBD market is concerned. The current valuation of the market size of the region is a fraction of what this region is actually worth. The illicit market for cannabis has been in the region for decades and even though the legalization has reduced the illicit trade, most of the market still runs under illegal businesses.

The potential of CBD as a potent product for treating ailments like chronic pain, and its prowess in the management of several neurological disorders like Parkinson’s disease, and Alzheimer’s disease, in the reduction of stress and anxiety, has been recognized all over the world. Recent studies proving its potency in reducing chemotherapy-induced nausea etc. this has also resulted in its wider acceptance rates. The public is getting more aware of the uses of CBD oil and the demand is set to increase.

The fastest-growing segment has been recorded as broad-spectrum or distillates. Since these broad-spectrum or distillates do not contain a detectable amount of THC they can be procured by various businesses on a wholesale basis. They usually contain three or more cannabinoids in a limited range and can be used to produce soft gels, fruit chews, gummies, topical ointments, formulated oil drops, and other oil-soluble products.

The highest market share in the end-use segment was held by the personal care and cosmetics sub-segment, 29.9% in 2021. The segment’s growth can be attributed to the recent legalization of the use of CBD products in a medical capacity and the growing adoption of hemp-derived CBD-based products by the consumers. Hemp has become a vastly used ingredient in cosmetic and personal care products resulting in the popularity and demand for hemp-derived products. The growing market currently caters to a selected income group, but the growing consumer base in the region can be a key driver for the growth of this segment. 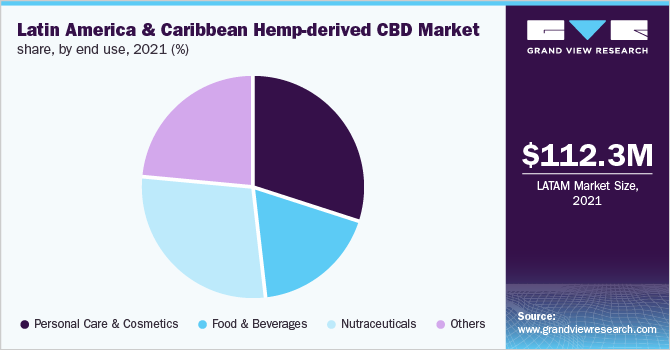 The food and beverages sub-segment in the end-use segment is the fastest growing for the forecast period. This can be due to the increasing demand for the overall CBD products. In light of the recent legalization of the use of CBD in some form or the other in the majority of the LATAM and Caribbean region has been a key driver for the growth potential of this sub-segment.

The largest region according to the market share was Colombia with 30.6% of the total revenue share in 2021. Colombia legitimized the cultivation of hemp and production of its products in 2017 upon obtaining a license from the government, only for medical purposes. Personal cultivation of hemp has also been made legal, purchase of hemp-derived CBD as a medicine has been decriminalized and can be done via pharmacies upon producing a prescription. The growing ease of production and recent legalizations have been key drivers of the growth of the region.

The fastest-growing region for the forecast period is Mexico; this growth can be attributed to the recent approval of several OTC products opening up a new consumer base for hemp-derived CBD products, in 2018.  A bill for the legitimization of the recreational use of marijuana has been voted upon, in 2021. The bill was not passed but the fact that the country’s government has considered legalizing adult use of marijuana has opened up the gates for the legal trade of medicinal purposes marijuana and CBD products. This is going to help the regional market growth.

The Latin America and Caribbean hemp-derived CBD market mostly have players from outside since the farming and cultivation of hemp is still not legal in the majority of the countries within this region. The companies having the largest market share in the region belong to U.S. and Europe, along with the companies that have trade partnerships with regional governments. Some prominent companies in the Latin America and Caribbean hemp-derived cannabidiol market include:

This report forecasts revenue growth at the country level and provides an analysis of industry trends in each of the sub-segments from 2017 to 2030. For this study, Grand View Research, Inc. has segmented the Latin America and Caribbean hemp-derived cannabidiol market report based on the product type, end-use, and region:

How big is the Latin America and Caribbean hemp-derived cannabidiol market?

What is the Latin America and Caribbean hemp-derived cannabidiol market growth?

b. Full-spectrum or terpenes dominated the Latin America and Caribbean hemp-derived cannabidiol market with a share of 41.9% in 2021. The full spectrum products or terpenes-containing products have anti-inflammatory properties due to which it is highly preferred over products containing only CBD. The fact that it has better medical properties is a key factor for a large market share.

Who are the key players in Latin America and Caribbean hemp-derived cannabidiol market?

What are the factors driving the Latin America and Caribbean hemp-derived cannabidiol market?

b. Latin America and the Caribbean region has been key region for cannabis, the low cost of labor and high potential of agricultural benefits from farming have been key drivers propelling growth in the region.