The global LED table lamps market size was valued at USD 4.97 billion in 2018 and is estimated to expand at a CAGR of 15.2% from 2019 to 2025. Increasing demand for energy-efficient and sustainable lighting systems is the key growth-driving factor for the market. Moreover, increasing usage of advanced lighting system to enhance home décor is expected to open new avenues for the market over the next few years.

Also, the growing popularity of smart homes, especially in developing economies including China and India, is propelling the product demand. Over the past few years, climate change has become one of the major issues in the world. This has increased the awareness of energy conservation, which will have a positive impact on product demand. LED table lamps are very energy-efficient as they consume 80% less power than incandescent lamps. 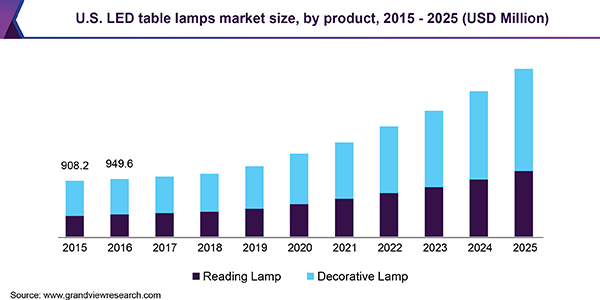 Furthermore, these products have greater durability and can last up to 40 times longer than incandescent lamps. These factors are also likely to boost product demand over the forecast period. Also, several initiatives, such as media campaigns, subsidies for LED lighting, and regularizing the energy appliances, undertaken by various governments across the globe will spur the market growth.

For instance, in June 2016, the Egyptian Electricity Ministry started the awareness campaign to encourage the citizens to rationalize their energy consumption. This campaign was also released on social media and radio advertisements. Don’t be too lazy to turn off an appliance”. Egypt is one of the third-largest and fastest-growing economies of Africa and is the largest consumer market in the Middle East and Africa region.

Decorative table lamps held the largest market share of more than 60% in 2018. These are energy-efficient, lightweight, and durable products used as the decorative indoor lighting system in residential as well as commercial applications. Integration of advanced technologies, such as AI assistance offering direct control through voice commands, will further propel the product demand.

Thus, constant product innovation, in terms of technology, various color shades, designs, and shadow patterns, will boost the segment growth. For instance, in October 2018, SYSKA LED, a subsidiary of SSK Group, launched its ground-breaking ‘Smart Table Lamp’, which is powered by Amazon Alexa. Moreover, the product is highly energy-efficient and has three light settings including Cool White, Day Light, and Warm White.

The commercial segment held the largest market share in 2018. LED table lamps are widely used in offices, restaurants, and several other commercial spaces as an energy-efficient lighting solution. An increasing number of commercial set-ups in developing economies, such as China, India, and Bangladesh, on account of rapid urbanization and supportive government policies is expected to offer numerous growth opportunities.

Household application is expected to be the fastest-growing segment at a CAGR of 15.6% from 2019 to 2025. Extensive R&D and product innovation in this segment by major manufacturers are expected to be the key growth drivers. For instance, in December 2016, General Electric Company launched a technologically advanced table lamp featuring Alexa by Amazon.

The online distribution channel is expected to generate the fastest CAGR of 15.9% from 2019 to 2025. These platforms provide unique offers and quick and doorstep delivery services, which is likely to drive the segment. Also, key industry participants, such as SYSKA LED and Xiaomi, are launching with their exclusive websites where buyers can purchase genuine products. This is also said to have a positive impact on segment growth. 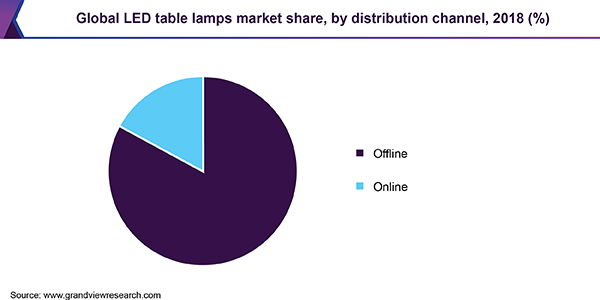 The offline distribution channel was the largest segment in 2018 and will retain its leading position throughout the forecast years. Major retailers including Wal-Mart Stores, Inc., and IKEA are expanding their distribution networks across the globe to gain maximum market share. For instance, in August 2019, Ikea launched its first store in India. Also, major retail chains like Reliance Digital and Croma are investing in the establishments of new stores to gain a competitive edge. For instance, in June 2019, Reliance Industries announced to launch 100 new stores across India under the brand, Reliance Digital.

Asia Pacific was the largest regional LED table lamps market in 2018 and will expand further at the maximum growth rate of 16.1% from 2019 to 2025 owing to increased product usage in residential applications. India is one of the lucrative markets in this region. New product launches in key markets including China and India are expected to boost the product demand over the coming years.

For instance, in June 2019, Xiaomi launched LED lamps under the brand name ‘Mi Table Lamp 1S’, exclusively for household applications. North America is projected to be the second-fastest-growing market during the forecast period on account of rising consumer awareness about energy conservation.

The market is slightly consolidated on account of the presence of key companies including Koninklijke Philips N.V., OSRAM GmbH, Ningbo Liangliang, General Electric Company, and SYSKA LED. This industry has been witnessing a trend, where established as well as new entrants are capturing a strong share of the market and focusing on technological developments, and product optimization and performance enhancement. Furthermore, these companies have undertaken several marketing strategies including product innovation, distribution channel expansion, and merger & acquisition, to gain a larger customer base.

This report forecasts revenue growth at global, regional, and country levels and provides an analysis of the latest industry trends in each of the sub-segments from 2015 to 2025. For this study, Grand View Research has segmented the global LED table lamps market report based on the product, application, distribution channel, and region: