The global long term care market size was valued at around USD 1 trillion in 2019 and is expected to register a CAGR of 7.1% over the forecast period. The market for long term care (LTC) is expected to boom owing to aging baby boomers, increasing disabilities among the geriatric population, the dearth of skilled nursing staff, government funding, and increased collaborations of private insurers with various governments. In September 2015, the Housing America’s Older Adults - Meeting the Needs of an Aging Population and Harvard Joint Center concluded in their new research that by 2030, the percentage of people aged over 50 in the U.S. is expected to exceed by 70%.

The extended life expectancy has thereby increased the number of disability cases. This is expected to drive demand for affordable long term care services at homes for memory loss, chronic illnesses, and post-hospital healthcare. 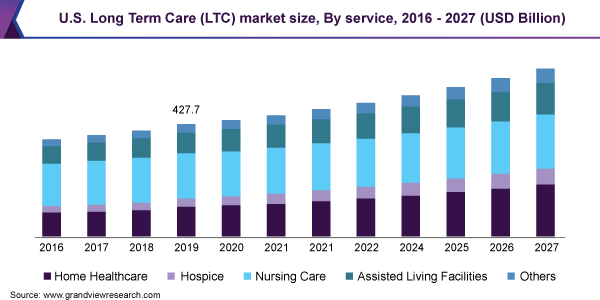 Burdett Trust for Nursing, U.K. launched a three-year-long Nursing Now campaign in February 2018, which is receiving support from the International Council of Nurses and the World Health Organization (WHO). It is a global health initiative that aims to raise the profile and status of the nurses and enable nurses to maximize their contribution to achieving Universal Health Coverage (UHC).

In January 2016, the AARP declared a free income tax assistance service for people aged 60 and above. The out-of-pocket burden for long term facilities is high, especially for nursing care. Medicare pays 50% of the expenses and the introduction of the affordable care act has also improved the insurance coverage system. The government is taking initiatives to decrease the cost burden on residents who cannot afford long term care facilities by improving the healthcare insurance coverage and decreasing overall premiums required to be paid.

The aging boomers are shifting their preference from nursing homes to home or community-based healthcare. In nursing homes, residents are deprived of freedom. Moreover, the cost of staying is a major contributor to increasing demand. Hospital stays cost USD 2,000 per day as against USD 44 a day.

The hospice segment is expected to exhibit the highest CAGR in the long term care market for long term care during the forecast period. In June 2013, the Cicely Saunders International and the Commission into the Future of Hospice Care published a report emphasizing on the current and future demand for hospice. The increasing need for chronic healthcare, especially Alzheimer’s and dementia, is expected to further accelerate demand for hospice. Hospice service providers are collaborating with other service providers to deliver healthcare in other settings. In January 2017, Kindred Healthcare, Inc., entered into a strategic clinical collaboration with Genesis HealthCare, one of the largest providers of post-acute healthcare to improve quality, outcome, and transitions across the post-acute continuum. This collaboration was aimed at enabling Kindred to become one of the leading providers of rehabilitation and post-acute long term care in the U.S., with hospice and other services.

North America dominated the global LTC market owing to the high percentage of geriatric population, greater government funding, and implementation of a streamlined regulatory framework. Around 60% of the funding for long term care in the U.S. comes from Medicaid. The funding increased with the implementation of the Patient Protection and Affordable Care Act. Under the Affordable Care Act, a separate system called Medicare Prospective Payment System (MPPS) was started to support long term services.

Moreover, insurance payers, along with Medicare and Medicaid, are funding long term care solutions so that the middle-aged demographic group can benefit from it. According to research conducted by the Economist Intelligence Unit (EIU) in 2015, the quality of hospice and palliative service offered in the U.K. was ranked as one of the best among 80 countries considered for the study. 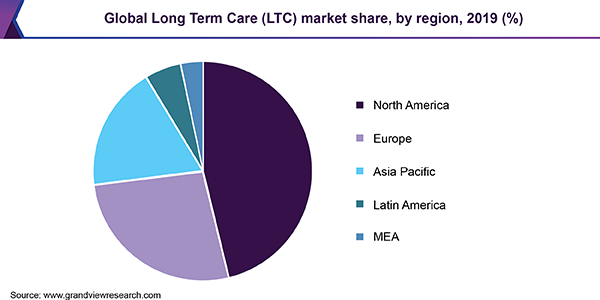 Asia Pacific is expected to register the highest CAGR in the market for long term care over the forecast period. This is owing to the increasing number of people diagnosed with chronic illnesses such as diabetes, cardiac disorders, and respiratory diseases. The market for long term care is in its nascent stage and has significant potential for growth. Moreover, international long term care homes are investing in countries such as India and Japan. For instance, in October 2013, BAYADA Home Health Care, a home healthcare giant based in the U.S., acquired a 26% stake of India Home Health Care (IHHC).

Startups in the home healthcare industry, like Portea and HealthCare atHOME, succeeded in the country, following which, big hospitals chains like Apollo and Max have entered the Indian home healthcare market. In India, 65% of hospital visits can be managed at home. Acute services such as injury management, episode of illness, or recovery from surgery can be easily given at home, thereby eliminating the need to visit a hospital. This offers a potentially untapped market for hospice and home healthcare in India.

Mergers and acquisition, joint ventures, and partnerships and new facility launch are the key strategies undertaken by the players in the market for long term care. For instance, in June 2019, Ventas, Inc., a real estate investment trust, announced to acquire USD 1.8 billion portfolios of around 31 independent living communities, by investment through an equity partnership of 85% and 15% with Le Groupe Maurice.

Market contributors are expanding their capacity to cater to the increasing demand for geriatric long term care services. For instance, in May 2016, Brookdale invested USD 8 million in its senior living facility in Florida. The expansion plan was to address the growing incidence of Alzheimer’s and dementia among the people. In April 2016, Brookdale Senior Living, Inc. invested USD 1 million to expand its dementia services by adding 19 apartments to its Clare Bridge Crossings facility.

In the year 2018, the U.S. administration announced a massive reduction in the regulations on American businesses and decrease regulatory spending. Thus, with the new order, home health care companies observed several opportunities due to the reduction and leniency of regulations that were detrimental to small businesses in the U.S.

This report forecasts revenue growth at global, regional, and country levels and provides an analysis of the latest industry trends in each of the sub-segments from 2016 to 2027. For this study, Grand View Research has segmented the global long term care market based on service and region: 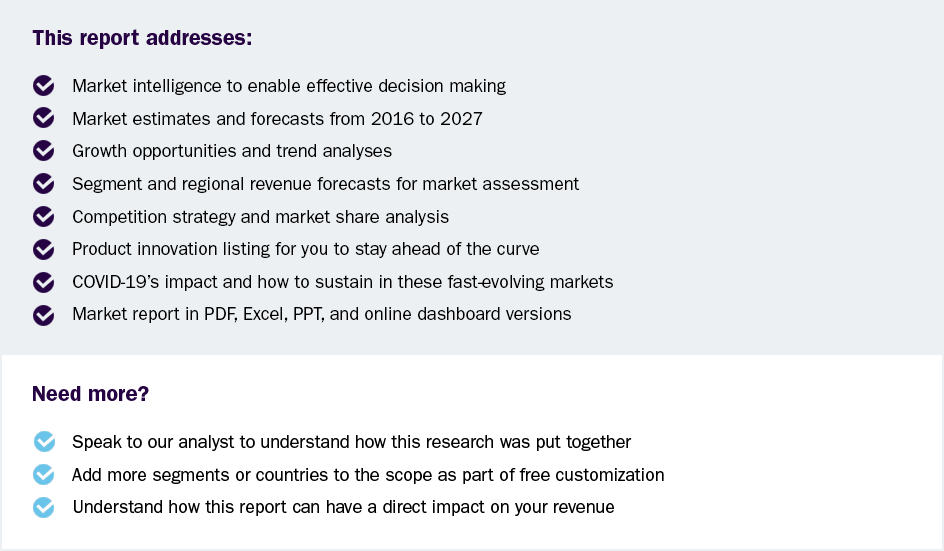