The global lung cancer screening software market size was valued at USD 11.44 million in 2018 and is anticipated to expand at a CAGR of 19.5% over the forecast period. Increasing incidence of lung cancer is one of the significant factors driving the market. According to the National Cancer Institute estimates, over 228,150 new cases of lung cancer were reported in the U.S. in 2019. Growing number of screening programs across the globe is also one of the key factors driving the market. 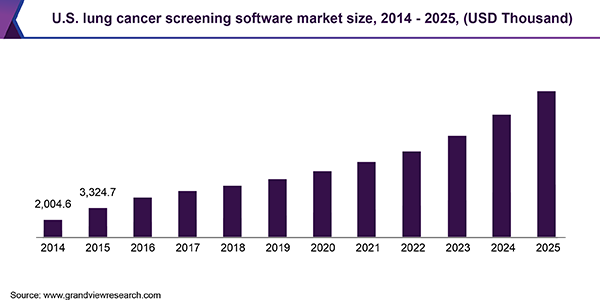 A large number of clinical trials, studies, and demonstration projects are being conducted around the world to evaluate the effectiveness of screening programs. For instance, in 2013, the Dutch-Belgian Lung Cancer Screening Trial (NELSON) was launched, which was a randomized trial, aimed at comparing LDCT screening with the usual care. An increase in the number of these trials and studies also surges the demand for software solutions for workflow management.

Many recommendations related to screening have been released which in turn supports the implementation of programs. For instance, the United States Preventive Services Task Force (USPSTF) recommends annual LDCT in high-risk individuals, aged 55 - 80 years with less than 30 pack a year, and current or former smokers who have quit within the past 15 years. However, governments in many regions including Europe, Asia Pacific, Latin America, and MEA have not fully implemented the programs.

In 2018, North America led the global market. Key factors contributing to the high demand include the presence of a large number of screening programs, which in turn aid in adoption of these software solutions for patient management. Growth in a number of studies and clinical trials for evaluating the effectiveness of programs in the region also impels demand for such software. For instance, National Lung Screening Study (NLST), launched in 2002 in the U.S., was one such randomized trial of annual screening for comparison of LDCT with chest radiograph in high-risk individuals. 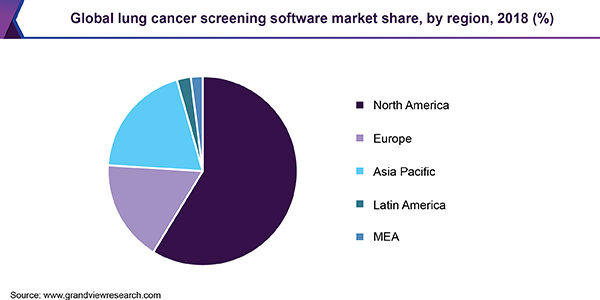 Growing target population and presence of a large number of screening centers in the region also boost the demand for software solutions to optimize workflow management. It is estimated that there are about 1,800 screening centers across the U.S. In addition, rise in awareness about lung cancer detection and favorable government initiatives for implementing programs contribute to the market growth. For instance, in 2018, the American Lung Association and American Thoracic Society (ATS) released a new screening implementation guide at ATS 2018 International Conference.

Asia Pacific is expected to emerge with the fastest CAGR of 23.4% over the forecast period due to increasing prevalence of lung cancer and rising number of trials and studies, particularly in Japan, China, South Korea, and Taiwan. According to Globocan estimates, about 160,068 new cases for lung cancer were reported in South East Asian region in 2018. Growing awareness about screening programs and improving healthcare infrastructure are also likely to boost the market growth in the region.

Key companies in the market include Nuance Communications, Inc.; Eon; Koninklijke Philips N.V.; Siemens Healthineers AG; PenRad Technologies, Inc.; MRS Systems, Inc.; and Magview. Growing collaborations, product differentiation, and initiatives for increasing the awareness about lung cancer screening are some of the key strategies adopted by these companies to maintain their market position. Most of these firms are based in the U.S., owing to implementation of large number of screening programs; however, government support for prevention of lung cancer, particularly in Europe and Asia, is resulting in these market players extending their offerings to these regions.

This report forecasts revenue growth at global, regional, and country levels and provides an analysis of the latest industry trends in each of the sub-segments from 2014 to 2025. For the purpose of this study, Grand View Research has segmented the global lung cancer screening software market report on the basis of region:

Who are the key players in lung cancer screening software market?

What are the factors driving the lung cancer screening software market?

b. Key factors that are driving the market growth include increasing incidence of lung cancer and also due to growing awareness about early-stage diagnosis of lung cancer.

How big is the lung cancer screening software market?

What is the lung cancer screening software market growth?

b. North America dominated the lung cancer screening software market with a share of 58.9% in 2019. This is attributable to the presence of a large number of screening programs, which in turn aid in the adoption of these software solutions for patient management.