The global malaria diagnostics market size was valued at USD 728.8 million in 2021 and is anticipated to witness a CAGR of 5.4% during the forecast period. The rising demand for malaria diagnostics and the introduction of novel diagnostic techniques are the key factors driving the market. Malaria is one of the most widespread life-threatening diseases, commonly occurring in tropical and subtropical regions due to changing climate, low economic growth, underdeveloped healthcare infrastructure, and lack of access to advanced treatment. The tropical disease caused by the female Anopheles mosquito, infected by the Plasmodium species caused over 4,35,000 deaths globally in 2017, as stated by the World Health Organization (WHO). Statistics from the same source indicate that over 219 million cases of malaria were recorded globally, with over 92% of cases being reported from Africa, 6% from South East Asia, and 2% from the Eastern Mediterranean regions. Thus, rising disease incidence is also anticipated to boost the growth of the market for malaria diagnostics in the future.

In Africa, non-governmental and governmental organizations announced initiatives to support the COVID-19 research and control program. The Global Fund to Fight AIDS, Tuberculosis, and Malaria permitted receivers to use funds from already existing grants in order to control COVID-19. Efforts were taken to minimize and control the spread of the COVID-19 virus, to avoid situations that arose during the Ebola outbreak, where millions of Malaria cases were left untreated due to the severity of the Ebola virus. These were some of the factors driving the market for malaria diagnostics during the COVID-19 pandemic.

It is one of the leading causes of death in many African, Asian, and Latin American countries, such as Uganda, the Democratic Republic of Congo, Columbia, Peru, and India. Malaria during pregnancy can cause low birth weights, stillbirths, and congenital infection. Technological advancements are also expected to be one of the key drivers for the market for malaria diagnostics. Increasing demand and rising need for high-quality and cost-efficient diagnostic methods are likely to trigger advancements that can offer improved access to diagnostics, especially in remote areas. Heavy investments by government bodies and private investors to curb the disease prevalence is also one of the major factors driving the market for malaria diagnostics. According to the data published by WHO, in 2017, approximately USD 3.1 billion were invested in the control and elimination of the disease by private international investors and government authorities of endemic nations. Over 312 million rapid diagnostic tests were delivered globally, mostly in the WHO African region, which is the worst affected region.

The Rapid Diagnostic Tests (RDTs) segment dominated the market and accounted for a revenue share of 53.7% in 2021. Microscopy was the second-largest segment owing to intermittent usage of the technique for disease diagnosis. It is one of the traditional and most reliable methods for the diagnosis of the disease. According to the estimates from WHO, over 204 million microscopic malarial tests were conducted globally. Malarial parasites including P. falciparum, P. malariae, P. ovale, and P. vivax, at different stages of life, can be identified through this method. Additionally, the parasite density can also be quantified to accordingly design treatment plans. The molecular diagnostic test segment is expected to witness the fastest growth over the forecast period due to the accurate diagnosis offered by these tests.

Molecular diagnostic tests include conventional Polymerase Chain Reaction (PCR) and quantitative or Real Time-PCR (qPCR). The usage of qPCR using DNA extracted from blood samples has been used to detect low parasite counts or mixed infections. These tests are accurate, highly sensitive, and capable of detecting low parasite count. However, the market share of these tests is less owing to high costs, as well as a lack of specialized laboratories and a skilled workforce. An RDT is another method used for detecting specific malaria antigens in the blood sample. Estimates from WHO indicate that over 312 million RDTs were delivered globally in the year 2016. According to National malaria control program reports and sales data from manufacturers, 225 million P. falciparum tests were delivered in Africa, while the remaining were combination tests for P. falciparum, P. malariae, P. ovale, and P. vivax.

Africa is expected to lead the market owing to the highest disease burden. The African region had the highest revenue share in 2021. P. falciparum is the most prevalent malarial parasite in the region, accounting for an estimated 99% of all cases in Africa. According to the WHO, an estimated 92.0% of the global malaria cases and 93% of global malarial deaths were recorded in this region. These facts are indicative of the rising prevalence of malaria in Africa. 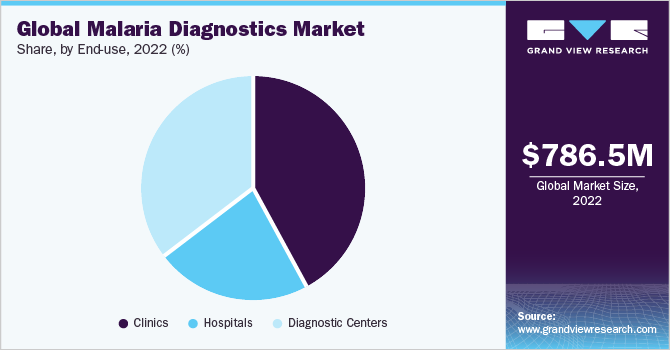 In Southeast Asia, the market is estimated to hold the second position with India accounting for the largest share of the regional market. The Southeast Asian region is also expected to grow along with the African region at a CARG of 5.4%. The disease diagnostic testing, in terms of volume, in India is majorly led by microscopy testing. With the rising awareness about the disease and increasing funding from the private sector, the need for diagnostic testing and care-based surveillance systems is anticipated to increase, thereby propelling the market growth.

Abbott; bioMérieux; Beckman Coulter Inc.; Siemens Healthineers; Leica Microsystems GmbH; and Bio-Rad Laboratories, Inc., in particular, account for significant market shares due to their strong global presence and distribution channel. For instance, bioMérieux has a vast network of distributors in more than 150 countries through 42 subsidiaries providing diagnostic solutions. Some of the prominent players in the malaria diagnostics market include:

This report forecasts revenue growth at global, regional, and country levels and provides an analysis of the latest industry trends in each of the sub-segments from 2017 to 2030. For the purpose of this study, Grand View Research has segmented the global malaria diagnostics market report on the basis of technology and region:

How big is the malaria diagnostics market?

What is the malaria diagnostics market growth?

Which segment accounted for the largest malaria diagnostics market share?

b. Based on technology, Rapid Diagnostic Tests (RDT) segment held the largest share of 53.67% in 2021, owing to the higher usage and sales volume of products along with increasing distributions by National Malaria Programmes (NMPs).

Who are the key players in the malaria diagnostics market?

What are the factors driving the malaria diagnostics market?

b. Key factors driving the malaria diagnostics market growth include increasing demand for diagnostic tools in malaria-endemic countries, the development of technologically advanced and efficient diagnostics, and market players and private investors to curb the prevalence of malaria.