Manual Resuscitators Market Size, Share & Trends Analysis Report By Type, By Modality, By Material, By Technology, By Patient Type, By Application, By End Use, By Region, And Segment Forecasts, 2019 - 2026

The global manual resuscitators' market size was valued at USD 294 million in 2018. The market of manual resuscitators also known as Bag Valve Masks (BVM), is expected to witness growth owing to the increasing incidence rates of cardiac arrest, increasing awareness initiatives and simulation websites, and the need for neonatal care.

In May 2016, the American Heart Association (AHA) released a snapshot of the heart disease status around the globe. The health data compiled from around 190 counties showed heart disease to be the prime cause of death. There are around 17.3 million deaths each year and the number is expected to rise over 23.6 million by 2030. 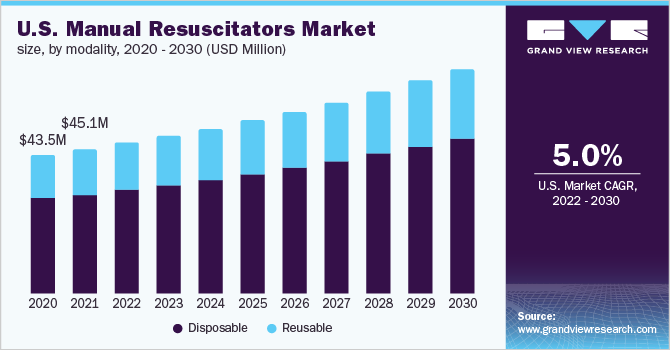 International organizations are coming together to reduce the chances of cardiac arrest cases and improve lives. The AHA is working in collaboration with the Cardiology Group and the United Nations to launch an evidence-based study. The study will be a collection of data from countries all around the world. The initiatives taken have reduced the overall death rates by 30.8% from 2001 to 2011.

Based on services, the market is segmented into coronary care, intensive care, neonatal intensive care, and others. The intensive care held the largest share in the service segment of the market due to increasing patient volume seeking intensive monitoring and nursing round the clock. In a few hospitals, there are ICUs specialize in certain patient types such as cardiac, surgical, medical, etc.

The coronary care segment, care which is being provided at a dedicated unit in the hospitals called Coronary Care Unit (CCU), is expected to grow at the fastest rate over the forecast period. Also, increased patient preference towards secondary health care for a shorter hospital stay and dedicated monitoring is another key factor driving the market growth.

Based on material, the manual resuscitator market is classified as silicone, PVC, and rubber. The silicone segment held the largest market share in 2018 due to its extensive use in the hospitals and outpatient setting for treating adult and pediatric patients suffering from respiratory or heart disease. 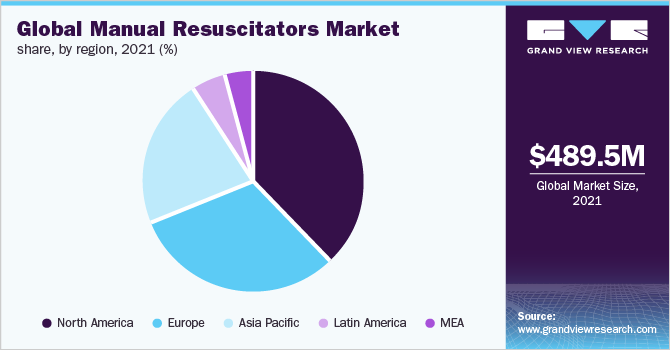 The other segment held the largest market share in 2018 due to extensive use in hospitals for treating adult patients. However, the pop-off valve segment is anticipated to grow rapidly at a high CAGR over the forecast period. The demand for the pop-off valve is growing at the neonatal intensive care units (NICUs) as most of the neonates require respiratory support at birth.

Based on patient type, the market is divided into an adult, pediatric, and others. The other segments include the neonate's and infant's patient population. The adult segment held the largest market share in 2018 due to the rising prevalence of Chronic Obstructive Pulmonary Disease (COPD) and cardiac diseases among the population which includes a large geriatric patient pool. However, another segment that includes neonates and infants patient population is the fastest-growing segment and is anticipated to grow at a high CAGR over the forecast period.

Based on the application the manual resuscitators market is divided into Chronic Obstructive Pulmonary Disease (COPD), cardiopulmonary arrest, and others. The other segment includes the application of resuscitators during anesthesia and for treating conditions like asthma. The COPD segment held the largest market share in 2018 attributed to the rising burden of the diseases.

According to estimates from the Global Burden of Disease Study, COPD was prevalent in more than 300 million people in 2013. The disease burden and its financial impact are predicted to increase with time, mainly due to the aging population. COPD is the third leading cause of death worldwide. However, the cardiopulmonary arrest segment is expected to gain market share and is projected to grow at a rapid pace during the forecast period.

Hospitals dominated the manual resuscitators' end-use market in 2018. BVMs in hospitals are used in cases of cardiac arrest, intensive care, and neonatal care. The American Health Association (AHA) published the first guideline for reviewing, researching, and reporting in-hospital resuscitation. The in-hospital Utstein Style was published as a mechanism of international standardization and is used as a reporting system for patient monitoring. For instance, the AHA has established the National Registry of Cardiopulmonary Resuscitation (NRCPR), which acts as a multi-site data collection source. The registry enables inter-facility comparison between various hospitals, establishing a standardized mechanism.

The use of out-of-hospital/prehospital/community resuscitators is expected to witness a faster growth owing to the increasing need to provide bystander cardiopulmonary resuscitation and the related awareness initiatives taken. The main reasons why bystanders are not able to perform CPR are the unavailability of CPR kits in the vicinity and lack of training. In July 2014, the British Heart Foundation improved public access to resuscitators by committing to fund the initiative, where a national public access defibrillator database would be set up in the UK to overcome these issues.

North America held the largest market share in 2018. The demand for resuscitators in North America is expected to witness high growth owing to increasing cases of cardiac arrest and neonatal ventilation.

Moreover, companies are launching newer technologically advanced products to provide state-of-the-art resuscitation. In November 2015, Foothills Hospital developed a device to resuscitate a baby while its umbilical cord is still attached. Inspire, a portable integrated station that supports transfusion and resuscitation is expected to enhance urgent care.

Moreover, initiatives to control the outside hospital cardiac arrest are expected to drive the demand for resuscitators. Research networks, such as the Resuscitation Outcomes Consortium (ROC), are established to study better ways to treat outside hospital cardiac arrest and trauma cases. The ROC is a clinical research network of ten regional centers throughout the U.S. and Canada.

The Asia Pacific is expected to witness the fastest growth owing to the increasing need for ventilation. Realizing the need for development, governments have taken efforts to bring in newer technologies, which can be user-friendly and effective. In October 2015, the government of India introduced the augmented infant resuscitator which provided detailed information on resuscitation to healthcare providers.

Companies such as Laerdal provide resuscitation training material and workshops to increase the awareness of cardiac resuscitation. In January 2016, Laerdal Medical and SonoSim, Inc. collaborated to launch the ultrasound solution for SimMom and SimMan. The solution provides classroom learning related to trauma care, critical care, and pregnancy.

Moreover, companies are following mergers and acquisitions to expand their presence in this market. In July 2018, Medline industries acquired NeuroGym Technologies, a therapy and rehabilitation equipment maker based out at Ottawa. With this acquisition, Medline focusses to offer improved solutions for post-acute healthcare in North America.

This report forecasts revenue growth and provides an analysis of the latest trends in each of the sub-segments from 2015 to 2026. For this study, Grand View Research has segmented the manual resuscitators market based on type, modality, material, technology, patient type, application, and end-use:

Unusually high demand for mechanical ventilators is resulting in a significant shortage of these devices in key countries affected by the Covid-19 outbreak. The unmet demand for mechanical ventilators is driving biomedical engineers and scientists to create makeshift ventilators using respiratory devices such as manual resuscitators, PAP devices, nebulizers, oxygen concentrators, and others. This is acting as a pivotal factor for the growth of manual resuscitators market in recent times. We at GVR are trying to quantify the impact of this pandemic on manual resuscitators market. Get your copy now to gain deeper insights on the same.