The global matting agents market size was estimated at USD 633.80 million in 2015. The rise in the paints and coatings industry coupled with the development of customized matting agents is contributing to the market growth.

Matting agents are additives that enhance the performance of paints and coatings. They create a micro-rough surface. This facilitates to diffusely reflect the incident light on it, thus creating an impression of low gloss. The particles are evenly distributed in the film.

Manufacturers are focusing more on developing innovative technologies that facilitate better application and product performance. Products having precisely improved particle size and pore distribution have been designed for optimum performance. Manufacturers have managed to develop products that not only provide a matting effect but also enhance other properties such as scratch and mar resistance.

Among inorganic matting agents demand, silica-based products occupied a dominant share with a demand of 87.24-kilo tons in 2015. Silica-based products are used for matting in a broad range of applications such as paints, coatings, lacquers, inks, varnishes, and plastics. They possess lower viscosity and stir in capability. Also, they exhibit dispersion stability in almost all types of formulations. 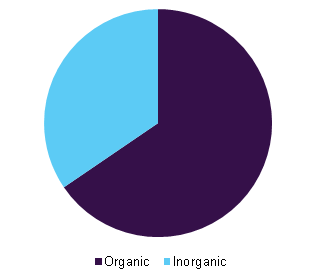 Wax type organic segment was worth USD 131.63 million in 2015 and is expected to grow at a forecasted CAGR of 5.0% over the next nine years. Wax type float on the top of paint thus modifying its surface properties. There has been a development of thermoplastic matting agents which can be used in combination with silica and waxes. The demand for thermoplastic products is expected to grow at an anticipated CAGR of 5.2% over the forecast period.

Regarding formulations, the waterborne segment dominated the global market demand with a 53% share and is expected to continue its dominance over the forecast period. Silica agents can be pre-wetted for obtaining properties, such as low dust development and low foam generation.

The powder coating formulation segment is expected to grow at an anticipated CAGR of 6.0% over the forecast period. It is used in powder coating applications that have been developed, which provide enhanced matting performance while maintaining the coating properties such as flow, and color stability. Owing to its durable, economical, and quality attributes, there has been a rise in demand for powder coatings, and this trend is expected to continue over the forecast period thus benefitting the overall industry growth.

Industrial coatings demand was 53.4 kilotons in 2015 and is expected to reach 86.5 kilotons by 2025. Matting agents are widely used in industrial applications, such as printing inks, metals, papers, and plastics. Among these applications, the plastics segment is expected to witness the highest CAGR of 5.5% from 2016 to 2025.

The Asia Pacific dominated the market and occupied more than 35% of the overall industry. Rapid industrialization in developing countries, such as China and India. Growing awareness regarding matting agents has contributed favorably to the regional market volume in the recent past, and this trend is expected to continue over the forecast period.

The Europe market is projected to grow at an anticipated CAGR of 5.1% over the forecast period. The high demand for applications such as architectural, wood coatings, and industrial coatings coupled with the presence of the leading industry participants are contributing to market growth in the region. North America is expected to witness a demand of 55.8 kiloton by 2025.

Key industry participants include Deuteron, Evonik Industries, PPG, W.R. Grace & Co., Huber Engineered Materials, and Baltimore innovations. The industry is characterized by customized product offerings by the participants. In the past, difficulties such as obtaining a uniform gloss were faced when matting agents were used with UV coatings. However, innovative products have been developed which overcome such problems.

Companies, such as Evonik industries are concentrating on setting up new silica manufacturing plants in countries such as Brazil and Thailand to cater to the demand rise in the region. The industry participants are obtaining certifications such as ISO for their manufacturing setups. Apart from certifications, companies are also applying for compliance with regulations such as REACH.

This report forecasts volume and revenue growth and provides an analysis on the latest trends in each of the sub-segments from 2014 to 2025. For the purpose of this report, Grand View Research has segmented the global matting agents market on the basis of product, formulation, application and region: