The global medical adhesives market size was valued at USD 10.04 billion in 2019 and and is anticipated to expand at a compound annual growth rate (CAGR) of 8.0% from 2020 to 2025. Faster operating speed associated with the utilization of medical adhesives over traditional wound closure techniques such as stitches is predicted to drive market growth in the future.

The recent trend indicates market players adopting superior, yet cost-effective solutions with low maintenance & easy handling to gain a competitive advantage over existing competitors in the industry. Technological innovations have led to the development of environment-friendly and biocompatible adhesives for surgical applications. 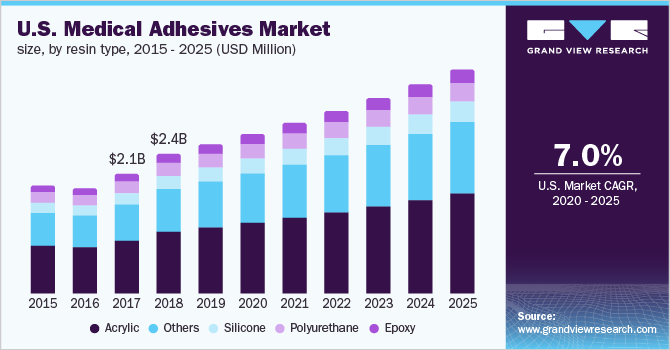 Medical adhesives are currently used in diverse applications ranging from medical device assembly to internal & external medical applications. For instance, the closing of skin wounds through stitching is now being replaced by special cyanoacrylates. The advantage offered by these products is that the whole wound can be covered. This method suppresses secondary bleeding and thereby reduces the risk of infection.

According to the World Health Organization, the global population is suffering from an epidemic of an unhealthy lifestyles. According to the organization, cardiovascular diseases are directly linked to an unhealthy lifestyle.  As a result, there is a sharp rise in the number of people that are afflicted with cardiovascular diseases. Further, the applications of the product in internal medical applications such as heart surgeries are expanding. For instance, fibrin-based adhesives which act as a key binding agent having a hemostatic effect are witnessing rapid growth in heart surgery.

In addition, the rising global elderly population is a critical factor supporting market growth. According to the United Nations, the global population aged 60 years or over was estimated at 962 million in 2017. According to the United Nations projections, the number of older persons is predicted to double by 2050 and reach 2.1 billion. The elderly population is more susceptible to various diseases than the younger population. This is likely to create a suitable platform for market growth over the coming years.

The widespread application of medical adhesives including bandages, surgical tapes, wound care patches and transdermal patches are playing a vital role in the healthcare market. Medical adhesives including cyanoacrylate and fibrin find major applications in cardiovascular surgery to control hemorrhage. For instance, fibrin based adhesives are expected to penetrate at a significant rate owing to their ability to provide effective hemostasis in a range of aortic and cardiac surgeries. As a result, there is a growing demand for medical adhesives in the healthcare sector.

The aging population suffers from various ailments due to the lack of exercise, proper nutrition, and healthcare. The U.S. governmental authorities are adopting various initiatives to offer better health facilities to the elderly in the region. The Atlanta Regional Commission (ARC) has taken various initiatives to improve and transform cities and neighborhoods to suit the needs of the elderly and provide them with a healthy environment to live in.

Alzheimer’s disease, hypertension, type 2 diabetes, osteoporosis, cataracts, arthritis, cancer, cardiovascular disease, and atherosclerosis are the most common types of diseases among the elderly. The diseases require proper treatment with effective medicines and appropriate nutrition, which in turn is anticipated to boost the market demand over the forecast period. For instance, there is increasing utilization of transdermal patches for insulin delivery among diabetic patients. This is expected to propel the medical adhesives demand over the coming years.

The primary raw materials required for the production of medical adhesives include resins such as acrylic and silicone. The prices of these raw materials have witnessed a constant increase throughout the past decade. For instance, according to the Federal Reserve Bank of the U.S., the producer price index of plastic materials and resins manufacturing increased by 62.1% from 2008 to 2018.

Silicone resin is one of the primary raw materials required for the manufacturing of medical adhesives. Silicones are manufactured from pure silicon metal, which is obtained from the reduction process of silica sand and coke. Silicone is available in the form of silicone fluids, gels, elastomers, and resins. Silicone resins witnessed significant volatility in their prices owing to tight supply and increased demand in 2017.

Acrylics dominated the market with a revenue share of 44.8% in 2019. It is expected to maintain its dominance over the coming years. The use of acrylics is evident in vivid applications ranging from dental to the assembly of medical devices and equipment. Moreover, they are also utilized in internal as well as exterior medical applications such as skin tissue adhesives.

The demand for silicone-based medical adhesives is driven by their ability to provide adhesion to silicon and other difficult-to adhere substrates. In addition, they are characterized by extreme weather resistance and have longer durability as compared to acrylics. They are generally used in external applications in the form of medical tapes. However, the adoption of these products is restricted by their significantly higher cost as compared to other resins.

The ability of epoxy adhesives to cross-link provides them superior thermal and chemical resistance as compared to other resins. They are widely utilized for deep-section potting of medical components and needle assembly, due to their ability to fill large gaps and bond to a variety of substrates. They are also utilized in the creation of access ports that are embedded underneath the patients’ skin who require multiple infusions.

Other resins include natural products such as plasma & protein-based, chitosan-based, collagen-based, fibrin-based, and albumin-based adhesives. They are extensively utilized for internal medical applications and are predicted to penetrate the market at a significant rate owing to their biocompatibility and hemostatic effect.

Reactive & other technologies including one component reactive (heat cure, moisture cure, and radiation cure), two-component reactive, and self-cure and dual-cure adhesives dominated the market with a volume share of 83.7% in 2018. Light cure and dual-cure are the major technologies utilized in dental applications. Whereas, in internal medical applications, adhesives are generally bio-based and are based on two components of reactive technology.

Hot melt technology does not require drying, as with water or solvent-based technology, and has excellent adhesion properties. The flexibility offered by hot melts to bond on both smooth and rough surfaces is a significant factor in facilitating the faster growth of this segment. Moreover, hot melts are solvent-free, environment friendly, and have a fast-setting speed. Hot melts are preferred over water-based products in transdermal patches in order to maintain strong adhesion over wet skin.

In water-based technology, water is used as a carrier or diluting medium and is allowed to be set by evaporation, or absorbed by the substrate. These products are typically formulated as acrylic polymer emulsions in water. They deliver excellent adhesion to polar substrates and provide good transparency retention and high resistance to extreme environmental conditions.

In solvent-based technology, organic solvents are used as a carrier or diluting medium as well as for surface preparation and clean-up. The demand for solvent-based adhesives is expected to grow at a minimal rate owing to environment and worker safety regulations and increasing crude oil prices. The use of high-performance medical adhesives as accurate, clean, and fast bonding solutions is a significant factor driving the growth of solvent-based technology.

Internal medical applications dominated the global medical adhesives market in 2019. It is also estimated to grow the fastest with a CAGR of 8.6% from 2020 to 2025, in terms of revenue. Bioadhesives are typically used for internal medical applications and are primarily utilized in intracorporal conditions which require direct contact with organs, tissues, and body fluids. These products are primarily used for reducing bleeding complications inside the body. 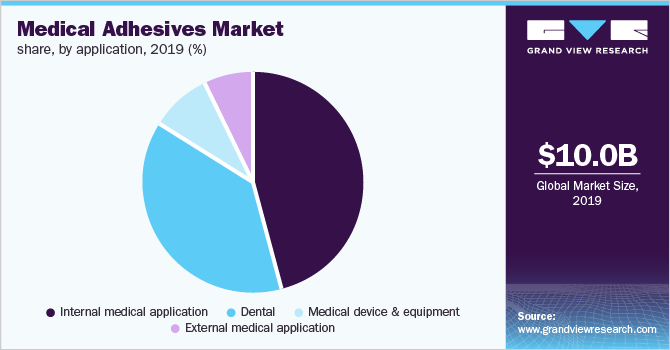 Products in dental applications include adhesive resins and self-adhesive resins. These products act as a glue to hold together the casting to the tooth structure. They are generally based on acrylic, methyl acrylate, or diacrylate polymers combined with adhesive monomers that have strong bonding capabilities to metal substrates. They may require separate primers to bond to metal, ceramic, and tooth substrates.

Asia Pacific is projected emerge as the fastest growing regional market over the forecast period. The large population in Asia Pacific along growing healthcare awareness and higher rate for wound infections are the major growth factors for this region. Large number of diabetes patients in the region is also likely to act as contributing factor to the expansion of medical adhesives industry. 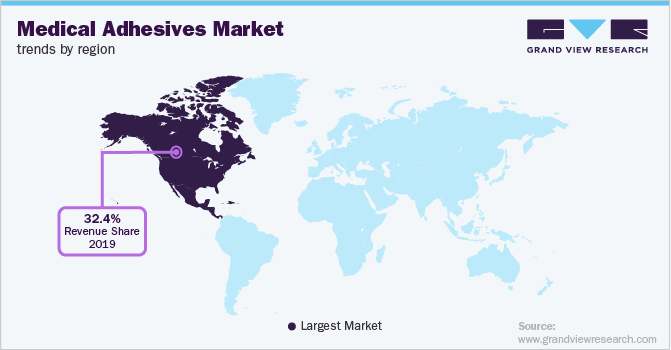 As reported by United Nations, Asia Pacific accounts for 60% of world’s population. In addition, Asia Pacific is also home to large number of diabetic patients According to the statistics by Asian Diabetes Prevention Initiative, about 60% of the diabetes cases in the world are from Asia, and there is increasing awareness among the population regarding diabetes in the region. This is expected to stimulate the demand of medical adhesive products such as transdermal insulin patches in the region over the coming years.

According to Indian Brand Equity Foundation (IBEF) in 2017, India healthcare market is forecasted to reach USD 372 billion by 2022. The hospital industry in India is anticipated to grow at a CAGR of 17% to reach USD 8.6 trillion in 2022 from USD 4 trillion in 2017. Growing awareness associated with health and preventive care, rising income levels, and rising access to insurance is expected to boost healthcare services demand in future. These positive developments in the healthcare industry in India are estimated to be significant drivers of medical adhesives market in the country.

The rise in public expenditure on healthcare is expected to further boost the demand for medical adhesives demand in India. For instance, as per 2022’s Economic Survey, this expenditure was 2.1% of GDP in FY2021-22, compared to 1.8% from the previous year. Rising supportive government policies is also expected to promote healthcare sector India, thereby influencing medical adhesives market growth. For instance, Ayushman Bharat, a scheme for vulnerable and poor families to support the coverage of INR 5 lakh per family, for secondary and tertiary hospitalization.

The global medical adhesives market is characterized by the presence of numerous big and small players. The major market players include 3M, Baxter International, Stryker, Dentsply, Bostik SA, H.B. Fuller Company, and Henkel AG & Co. KGaA. Since the market is highly competitive in nature, the players are engaged in increasing their competitive share by means of strategic initiatives such as new product developments, and mergers & acquisitions.

New product development is a significant strategy adopted by major players in the industry. For instance, in April 2017, Baxter International, the leader in manufacturing surgical adhesives, unveiled new designs to enhance the company’s FLOSEAL and TISSEEL hemostatic products.

This report forecasts revenue growth at global, regional & country levels and provides an analysis on the industry trends in each of the sub-segments from 2014 to 2025. For the purpose of this study, Grand View Research has segmented the global medical adhesives market report on the basis of resin, technology, application, and region: 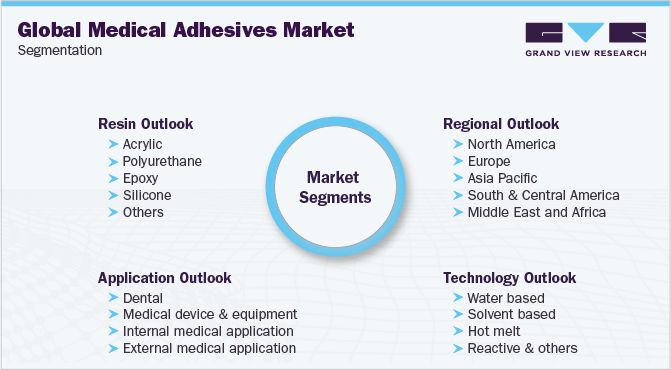